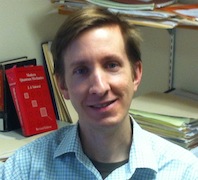 “The Big Bang Theory” is one of television’s most popular shows, but if you’re interested in physics, cutting-edge research and high IQs, you need to look no further than the Department of Physics in The College of Arts and Sciences. There, you’ll find Britton Plourde, an associate professor of physics whose research proposal caught the eye of the Army Research Office (ARO).

Plourde and a team of researchers from University of Wisconsin, Madison, and the University of the Saarland in Germany were recently awarded $2.25 million, $813,000 of which will go to SU, by ARO for their proposed project “Scalable Readout of Superconducting Qubits with Novel Superconducting Amplifiers and Metamaterials.”

Plourde, who will serve as principal investigator on the project, joined Syracuse University in 2005. Since then, his research lab has attracted overwhelming attention from around the globe, receiving a variety of funding from such organizations as the National Science Foundation (NSF), the Defense Advanced Research Projects Agency (DARPA) and the Intelligence Advanced Research Projects Activity (IARPA), just to name a few. In Plourde’s research lab, he, as well as postdoctoral research associates and graduate and undergraduate students, studies quantum coherence and vortex dynamics in microfabricated superconducting devices at low temperatures.

“We are part of a larger community of researchers worldwide during a truly incredible period with impressive developments occurring all the time. This new funding from the ARO will allow us to expand our research efforts into yet another exciting direction,” said Plourde, who is an NSF CAREER award recipient.  “With the new funding, we hope to develop a series of new techniques for reading out the state of superconducting circuits with several attractive features for scaling up to large systems compared to the current state-of-the-art.”

According to Plourde, electrical circuits made from superconducting materials and measured at temperatures near absolute zero are one of the leading systems for forming the elements of a quantum computer. Such a computer could potentially solve significant problems that are impossible to address on the most powerful conventional computers available today.

“We are developing a new approach to measure the quantum states of superconducting circuits rapidly and with high fidelity in a way that can be scaled to many such circuits,” added Plourde.

“Britton’s research is truly groundbreaking and we are very excited about the work he’s doing, including collaborations with corporate research labs and an institute in Germany,” said Alan Middleton, chair of the Department of Physics.  “I congratulate him on leading a new effort and for the increased support for his research program in quantum computing.”

Plourde holds a Ph.D. from the University of Illinois at Urbana-Champaign.