Article by SU Biologist Reveals When It Pays to Be a Lover, a Fighter, or Both 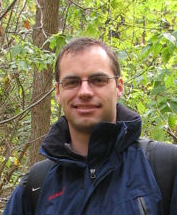 A biologist in The College of Arts and Sciences has determined that, during reproduction, a male animal can be a lover, a fighter, or both.

Stefan Lüpold, a research assistant professor specializing in behavioral ecology and sexual selection in animals, has been researching the matter with John L. Fitzpatrick, a lecturer at the University of Manchester (U.K.), and with Joseph L. Tomkins and Leigh W. Simmons, professors at the University of Western Australia.

Their findings are the subject of a groundbreaking article in Nature Communications titled “Female Monopolization Mediates the Relationship Between Pre- and Postcopulatory Sexual Traits.”

“Our studies show that where [male] animals fall on the lover-fighter scale depends on how much they are able to ensure continued mating rights with females,” Lüpold says. “In species where fighting for the right to mate means greater control of females, as with the elephant seal, males invest more in weaponry and less in testes. But where fighting occurs before and after mating, through competition among sperm, large weapons and testes are critical.”

Lüpold and his team studied more than 300 species of mammals, birds, fish, insects and parasitic worms. They found that when males had weapons large enough to ward off rivals, their mates wouldn’t cheat on them. Hence, testes size was less important.

This kind of behavior has evolutionary consequences, Lüpold says.

“Theory predicts a trade-off between investments in traits used to gain access to females [e.g., ornaments and armaments] and traits involved in competition among sperm after mating [e.g., testes and ejaculates],” he says. “This is because of the costs associated with their growth and maintenance within the finite energy resources available.”

But that’s not all,  Lüpold says. His team’s research confirms that sacrificing testes for weaponry makes little sense when ejaculates from two or more males overlap in the reproductive tract and compete for fertilization. This phenomenon usually causes males to invest in both weapons and testes.

“By introducing male-male competition into the equation, we can explain the oftentimes inconsistent direction of the relationship between sexual traits that we find among different studies,” Fitzpatrick says.

Fitzpatrick adds that while pheasants, minnows and bush-crickets have large weapons and testes, other organisms, such as seals, walruses and certain kinds of worms, have evolved larger weapons at the expense of the size of their testes.

“You don’t get something for nothing in evolution, so we want to see which species invest in weapons over testes,“ Lüpold says. “Some of these species invest in both, and that is a bit of a mystery. We will now look at whether maximizing investment in sexual traits means you pay the price in some other aspect of life.”