Leave it to Corey White, assistant professor of psychology in The College of Arts and Sciences, to get a head start on the competition. 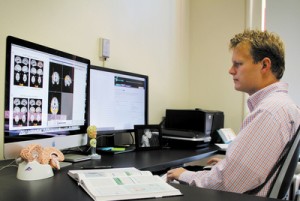 White is the focus of a Nov. 6 article in the journal Nature about young scientists involved with cognitive research. Aptly titled “Neuroscience: A Head Start for Brain Imaging,” the piece references White’s groundbreaking work in functional magnetic resonance imaging (fMRI).

“We’re extremely proud of him,” says Peter Vanable, professor and chair of psychology, who hired White earlier this year. “Corey is one of only a few people on campus who does this kind of work. His appointment, along with this article, underscores our department’s commitment to the teaching and study of cutting-edge research in the field of cognitive science.”

Like an MRI, fMRI uses magnetic field and radio waves to create three-dimensional models of organs and tissues to detect abnormalities and diagnose disease. White goes a step further by studying blood flow in the brain to pinpoint areas of activity. Such changes in blood flow, which are captured on a computer, help him understand how the brain works—and, to a certain extent, what people are thinking and feeling.

“Scientists have found that oxygen-poor hemoglobin in the brain reacts differently to magnetic resonance imaging than oxygen-rich hemoglobin,” White says. “We can use these contrasts [in the blood-oxygen response] to map images of brain activity.”

White earned a Ph.D. from The Ohio State University, before completing a postdoctoral fellowship in cognitive science at the University of Texas at Austin. The Nature article reveals that, over the course of four months, White applied for nearly two dozen jobs, from which he secured three interviews. It was his fMRI expertise that clinched the position at SU, which has been eager to elevate its neuroscience profile.

“When I interviewed here, I had a gut feeling about the psychology faculty,” said White, shortly after his SU appointment. “The department felt like home. … Now that I’m here, I’m eager to contribute toward the development of the neuroscience program at SU and to help prepare students for careers in this burgeoning field.”

Despite being a fast-growing area, neuroimaging, as a research program, can be a costly investment. White is meeting this challenge head on by setting up interdisciplinary collaborations at SU that take advantage of expertise in genetics, cardiovascular health and exercise sciences.

“I’ve been talking to an exercise scientist about relating the metrics of artery stiffness to cognitive processing,” he says.

Nature also points out that the neuroimaging boom is not confined to neuroscience departments. Established fields such as cognitive psychology and psychiatry are jumping on the neuroimaging bandwagon, as are various subfields, including neuroeconomics (i.e., the study of human decision making) and social neuroscience (i.e., the study of disorders and the development of human social behavior).

Case in point: SU’s new Neuroscience Studies Program, in which White and some of his psychology colleagues teach, also contains faculty members from biology; biomedical and chemical engineering; communication sciences and disorders; exercise science; and public health, food studies and nutrition. The program, which is administered by The College of Arts and Sciences, offers various graduate and undergraduate opportunities, including a 24-credit Integrated Learning Major in neuroscience. A neuroscience concentration for graduate students is also in the offing, pending approval of the University Senate and New York State Education Department.

Much of the program’s research is funded by the National Institutes of Health and National Science Foundation.

“Corey’s training in computational modeling uniquely positions him to make substantial theoretical contributions to the field of cognitive neuroscience,” says Amy Criss, associate professor of psychology and area director of the Cognition, Brain, and Behavior Program.

Adds Vanable: “Neuroimaging is an exciting field where young scientists such as Corey, with his computational expertise, fluency in imaging techniques and flair for interdisciplinary collaboration, can go far. Already, his impact on the University is being felt.”