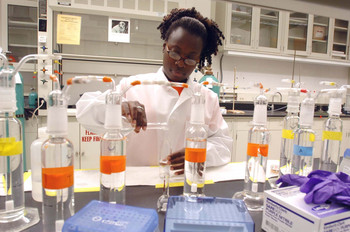 Traditional gender roles are still often a stumbling block for women in the STEM disciplines.

Both partners in the modern couple may each have professional lives outside the home but two careers still equals three jobs—two professions, plus managing a home and, sometimes, raising children.

And for women, oftentimes, that third job still remains their role.

“I think this is the single biggest problem that faces women,” according to Professor Joan Bennett of Rutgers University, who spoke recently as part of the SU ADVANCE “Conversations on Equity and Excellence” series. “The cultural expectations about women’s roles in the home are deeply entrenched.”

In her presentation “Science, Sex Chromosomes and Success,” Bennett spoke before about 40 audience members at Bird Library to discuss the reasons why women still lack parity with men in career advancement, especially in the STEM fields—science, technology, engineering and math. She also pointed out ways to correct that imbalance.

Bennett, a member of the National Academy of Sciences and professor in the Department of Plant Biology and Pathology at Rutgers University, serves as associate vice president for the Office of Promotion of Women in Science, Engineering and Mathematics.

Her appearance was sponsored by SU ADVANCE, which began in fall 2010 with funding from the National Science Foundation and seeks to support women in the STEM fields through recruitment, retention and promotion, creating a more equitable institution. 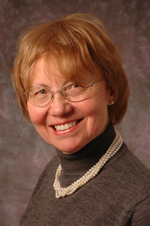 In one international study by the American Institute of Physics, 15,000 physicists—both men and women—were polled and researchers found that women are still doing the bulk of the work at home, Bennett said.

“We have to realize this is very hard to do the work inside the home; it’s easier in a modern home, but yet there’s still a lot of work in running a household,” Bennett said. “That’s why a lot of us are stressed.”

She emphasized that society undervalues that unpaid work. And even if couples split the responsibilities, “now you’re both working harder,” she said.

“We do have issues in our society if we are going to expect everyone to work outside the home. I don’t think our society has done a good job of accepting this fact,” Bennett said. “We need more economists looking at it.”

Bennett noted women have made great strides in higher education, as women make up 56 percent of those who earn undergraduate degrees and 44 percent of those earning Ph.D. degrees. “Nowadays women are dominating the undergraduate scene and are increasing numbers in all of the professions, but we remain stubbornly underrepresented in science, technology, mathematics and engineering,” Bennett said.

Some analysis also shows high percentages of women earning undergraduate degrees in selected STEM fields, but then those numbers drop off in graduate schools for those same fields.

Bennett encouraged administrators, departments and faculty members to take actions that will improve parity among women and men, including examination of data to identify where the differences may be, nomination of women for awards and increased sensitivity to embedded messages that denigrate women.

Most importantly, she said, “Do good science. It’s the single biggest thing that those of us who have Ph.D.s and are scientists and engineers and mathematicians can do is to show that we can do it.”

Bennett also reflected on the importance of mentors—and noted several who impacted her success. “I have been very blessed to have many mentors,” she said.

L.C. Smith College of Engineering and Computer Science Dean Laura J. Steinberg, who introduced Bennett, was a colleague of Bennett’s at Tulane University, where both had worked previously, and counts Bennett as a mentor.

“Joan has always taken a real interest in women in science and engineering in a manner that is helpful, that is encouraging, that gives us all confidence to go forward and to do more with ourselves to recognize our capabilities,” Steinberg says. “This is a quality I try to emulate.” 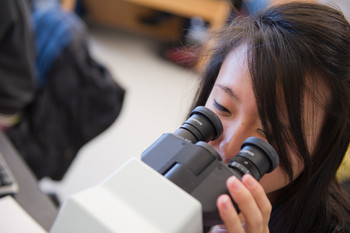 SU ADVANCE, which began in fall 2010 with funding from the National Science Foundation, seeks to support women in the STEM fields through recruitment, retention and promotion.

Direct support includes extending the network of women mentors, engaging with search committees to reflect on recruitment and creating a network of advocates and allies among academic leaders.

“We know that identifying new networks and new recruitment pipelines for women faculty have changed the composition of women on campus,” Garland says. “We started in 2009 with 48 women in 12 departments, and we now have 63, including an increase in the number of underrepresented minority women.”

Bennett has seen the implementation of beneficial policies for women at her university with such initiatives as extending the tenure clock and providing child care, but changes take more than just an institutional approach or adding new policies.

But, Bennett also recognizes that the growth in opportunities for women is encouraging.

“Women have all the strength and abilities necessary to succeed, and if you are lucky enough to be living in the United States, then the sky is the limit,” Bennett says. “It is a wonderful time to be born with two X chromosomes.”

The next event in the “Conversations on Equity and Excellence” series will be in March (exact date to be determined) with Mary Ann Mason, professor and co-director of the Center on Health, Economic and Family Security at the University of California, Berkeley, School of Law. She will present data featured in her new book “Do Babies Matter? Gender and Family in the Ivory Tower” (Rutgers University Press).