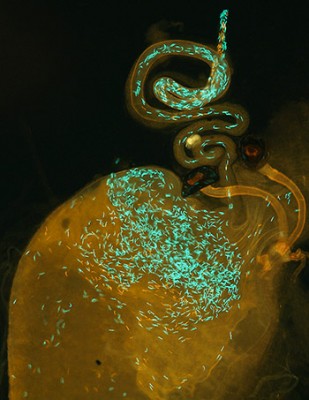 Biologists in Syracuse University’s College of Arts and Sciences have confirmed that reproductive isolation, a critical step in the formation of new species, can arise from diversifying sperm competition. Their findings, which have major implications for the study of biodiversity, are the subject of a groundbreaking article in the Oct. 7th issue of Current Biology (Elsevier, 2013).

Female promiscuity—something that occurs in a majority of species, including humans—results in the ejaculates from two or more males overlapping within her reproductive tract. When this happens, sperm compete for fertilization of the female’s eggs. In addition, the female has the opportunity to bias fertilization of her eggs in favor of one male’s sperm over others.

These processes, collectively known as postcopulatory sexual selection, drive a myriad of rapid, coordinated evolutionary changes in ejaculate and female reproductive tract traits. These changes have been predicted to be an important part of speciation, the process by which new biological species arise.

Until now, traits and processes that influence fertilization success have been poorly understood, due to the challenges of observing what sperm do within the female’s body and of discriminating sperm among different males. Almost nothing is known about what determines the sperm’s fate in hybrid matings where there may be an evolutionary mismatch between ejaculate and female reproductive tract traits.

Professor John Belote has overcome these challenges by genetically engineering closely related species of fruit flies with different colors of glow-in-the-dark-sperm. Working closely with Scott Pitnick, Mollie Manier, and other colleagues in SU’s Pitnick Lab, he is able to observe ejaculate-female interactions and sperm competition in hybrid matings.

“How new species arise is one of the most important questions facing biologists, and we still have a lot to learn,” says Pitnick, a professor in SU’s Department of Biology, adding that the mechanisms maintaining the genetic boundary between species is difficult to pin down. “This paper [in Current Biology] is perhaps the most important one of my career. It has been six years in the making.”

Belote, also a professor in the Department of Biology, says that sexual selection research has addressed mainly precopulatory, rather than postcopulatory selection. This disparity is due, in part, to the aforementioned difficulties of studying ejaculate-ejaculate and ejaculate-female interactions.

“By focusing on phenotypic divergence [i.e., the genetic make-up and environmental influences] between sister species in postcopulatory sexual selection, we can predict patterns of reproductive isolation and the causal mechanisms underlying such isolation,” he says.

In addition to Belote and Pitnick, the article was co-authored by William T. Starmer, professor of biology at SU; Manier, a former SU research associate who is assistant professor of biology at the George Washington University; Stefan Lüpold, an SU research assistant professor; Kirstin S. Berben, an SU lab technician; Outi Ala-Honkola, a former SU postdoctoral fellow who is a biologist at the University of Jyväskylä (Finland); and William F. Collins ’12, a former student of Pitnick’s who is a master’s candidate at the Johns Hopkins’ School of Advanced International Studies.

The study of sexual selection can trace its origins to Charles Darwin’s landmark book “The Descent of Man and Selection in Relation to Sex” (1871). Since then, much has been written on the subject. That it is relatively easy to witness what males do to exert dominance—think of elephant seals slashing one another’s necks or of bighorn sheep ramming horns—and what females look for in certain suitors, such as the iridescent plumage of the male peacock, sheds light on precopulatory sexual selection.

By comparison, the study of what happens after mating (i.e., postcopulatory sexual selection) didn’t get under way until the 1970s. Then there are the inherent research challenges.

“It’s difficult to observe the competition between ejaculates and female discrimination among sperm, given that it takes place inside the female and may involve complex biochemical, physiological and morphological interactions,” Pitnick says. “Although we have powerful tools for assigning paternity and for quantifying the outcome of sperm competition and cryptic female choice, it might as well be 1871, in terms of understanding the traits and processes of postcopulatory sexual selection.” 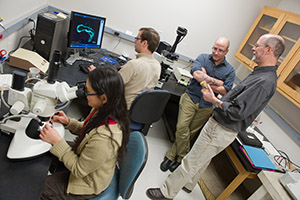 Pitnick and Belote have tackled the problem head on by genetically altering flies, so that their sperm heads are flourescent red or green. This approach has enabled them to directly observe sperm competition within the female, as well as the role of female behavior on sperm fate, such as when she discards sperm by forcefully ejecting it from her reproductive tract.

Central to their research have been two related species of fruit flies, Drosophila simulans and D. mauritiana, which diverged from a common ancestor more than 260,000 years ago—a “blink of an eye” in evolutionary terms, Pitnick says. Working with two closely related flies has helped him and his team better understand how not only sperm competition works, but also underlying mechanisms and processes rapidly evolve.

As a result, Pitnick and Belote are better able to determine what happens when a female mates twice (i.e., once with a male of her own species and once with member of a related species.) Then they can assess the predictability of the outcomes, based on knowledge of evolved ejaculate-female incompatibilities.

“The take-away from our study is that postcopulatory sexual selection can quickly generate critical incompatibilities between ejaculates and female reproductive tracts that limit gene flow between isolated populations or species,” Pitnick says. “Because female promiscuity and, by extension, postcopulatory sexual selection is so ubiquitous, it is likely to be a widespread engine of speciation.”