When an easy-to-understand guide to 3D printing technology wasn’t readily available in the marketplace, Anthony Rotolo, assistant professor of practice at the School of Information Studies (iSchool), and Isaac Budmen ’12, a Syracuse designer and artist, did what makers do: they created one to fill the bill. 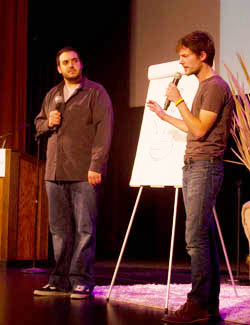 Rotolo (left) and Budmen discuss emerging technologies at a conference in November 2012.

Filling a void between the too-technical publications in existence and the “dummies”-type guides, “The Book on 3D Printing” provides an easy-to-understand, quick read on how 3D printing works. In maker style, the on-demand-published book just debuted on Amazon in paperback and Kindle formats.

Through their research and writing efforts over the past several years, Rotolo and Budmen look at the technology of 3D printing, or “additive manufacturing” as it is called. The process works by a machine, called a “3D printer,” producing objects through the layering of plastic or another polymer in ultra-thin coats, ultimately forming the object according to specific digital directions.

Although it may sound like science fiction, the additive manufacturing process is already changing the way some of the products you buy at the store are designed, Rotolo and Budmen write in the book’s introduction.

They note how recent advancements in the technology “have allowed these same processes to be scaled down for personal use, giving artists, inventors and hobbyists the ability to produce the same kinds of objects inexpensively at work or home.” They also note, “Some even predict that 3D printing has the potential to spark a ‘new industrial revolution’ of sorts, where individuals as well as corporations can manufacture goods.”

The book covers the basics of the 3D printing process, looks at the most well-known printing machines and products now available, and presents popular 3D modeling software and recommendations for the best software settings for printers. Sections on the history and evolution of the technology and the current state of the industry, and an assessment of what is possible and not possible to do with a 3D printer, also are included. In addition, the book examines the communities and resources that are emerging for hobbyists and pros to exchange ideas and information.

Their purpose in writing a basic guide to the 3D printing process, Budmen said, is to “open the door to the creative potential and productive power of 3D printing for everybody, not just mechanical engineers, but everyday inventors who have ideas for things that will make their life better, or just more personalized. Once you start thinking of your world as changeable, or even ‘makeable,’ there is no limit to what you can do.” Budmen, a former graduate researcher at the NEXIS lab in the iSchool, has demonstrated this in his own work, integrating 3D printing into his designs and artwork, which have been featured in 3D printing communities and in the London Science Museum.

“What I hope will come of the book is that young people, parents, teachers will pick it up and realize, ‘This is something I could actually do, and improve the things I care about.’ If we have people doing that, making their ideas into real-life things, then that’s the goal realized,” Rotolo said.

At present, it is estimated that there are only 70,000 3D printers existing in the world, so that makes the trend and the machinery to make 3D objects something that for now, “few people have a chance to see, much less access.” Still, Rotolo believes the technology is something that “in the future may become as common in peoples’ homes as document printers are now, and it is a technology with useful practicalities, rather than just a fad.”

Once people begin to explore the topic of 3D printing, and see its potential uses, that’s when the production method is apt to begin to spill over into the domain of public users, as opposed to the gadgeteers and technologists using it right now, he believes. “It’s the people who actually use something who decide how it integrates into our culture,” Rotolo noted. “3D printing is the same way; that integration can’t happen until people start imagining what they can do when they get their hands on it and try it.

“Just what Internet technologies like social networks have done for information availability is coming about for physical things. We will soon download, share and make real objects, just as we do now with digital content. As you look around, we are surrounded by plastic objects. Most of what we buy is plastic. For starters, just think about how we could create upgrades to mass produced products—a better lid for a coffee cup, a replacement cover for a remote control battery,” the professor concluded. “These are the real-life uses that make this technology personal.”

The book is available in both paperback and digital versions from TheBookOn3DPrinting.com.