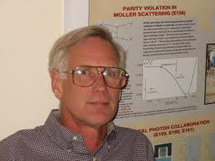 Paul Souder, professor of physics in The College of Arts and Sciences, is the co-recipient of the 2013 Outstanding Nuclear Physicist Award from Jefferson Science Associates (JSA). He shares the award with Douglas Beck, professor of physics at the University of Illinois at Urbana-Champaign.

Souder and Beck were selected by JSA for their leadership in the development of parity-violating electron scattering as a tool for the study of nucleon and nuclear structure, as well as for precision studies of the Standard Model of particle physics.

“Professor Souder is a truly outstanding physicist who has made major contributions to our understanding of the internal structure of the proton and neutron,” says Peter R. Saulson, the Martin A. Pomerantz ’37 Professor of Physics at SU. “His cutting-edge work in medium-energy particle physics is one of the most successful experimental research programs in our department.”

Souder and Beck were honored at a special ceremony at the Thomas Jefferson National Accelerator Facility (also known as Jefferson Lab or JLab), a nuclear physics research laboratory in Newport News, Va.

“This award to Doug Beck and Paul Souder recognizes two outstanding nuclear physicists for leading distinctive and incisive physics programs at Jefferson Lab,” says Hugh Montgomery, president of JSA and director of JLab. “Both Doug and Paul have also been enormously supportive of the entire Jefferson Lab enterprise. It should also be noted that [this] is an implicit tribute to the builders of the accelerator, which has the special properties required by these particularly demanding experiments.”

Souder is a national leader in experimental medium-energy particle physics. At JLab, he helped establish the Hall A Precision Parity EXperiment (HAPPEX) Collaboration, which has carried out numerous experiments utilizing parity-violating electron scattering. By “bouncing” electrons off of atomic nuclei, Souder has been able to gather precise information about the size and charge distribution of protons and neutrons—information critical to the study of the fundamental processes in nuclear physics.

“The present base instrumentation in Hall A has been used with great success for experiments that require high luminosity and high resolution in momentum and/or angle for at least one of the reaction products,” says Souder. “These precise measurements have implications for neutron star astrophysics and the analysis of atomic parity violations.”

Saulson credits Souder’s vision for the HAPPEX Collaboration, in addition to his intellectual leadership and pioneering research techniques. “Paul has trained a whole new generation of capable experimentalists,” he says.

Saulson also acknowledges the role of the physics machine shop, which built a specialized apparatus for Souder’s experiments. Located in the basement of the Physics Building, the shop provides conventional and computer numerical control (CNC) milling, turning, precision grinding and sheet metal fabrication and welding.

“SU machinists pride themselves on quality work, innovative solutions and prompt turnaround. Our experiments would not be possible without their contributions,” says Souder, echoing Saulson’s sentiments.

Souder joined SU’s faculty in 1983, following appointments at Harvard and Yale universities. He is a fellow of the American Physical Society and a recipient of the Award for Research Excellence from Sigma Xi.

The JSA Outstanding Nuclear Physicist Award, established in 2011 and awarded biennially, recognizes an individual who has made outstanding and sustained contributions in experimental and/or theoretical research related to the nuclear physics program at the Jefferson Lab. The award is funded through the JSA Initiatives Fund Program and is managed by the JSA Programs Committee.