From Virginia to Florida, there is a prehistoric shoreline that, in some parts, rests more than 280 feet above modern sea level. The shoreline was carved by waves more than 3 million years ago—possible evidence of a once higher sea level, triggered by ice-sheet melting. But new findings by a team of researchers, including Robert Moucha, assistant professor of Earth Sciences in The College of Arts and Sciences, reveal that the shoreline has been uplifted by more than 210 feet, meaning less ice melted than expected. 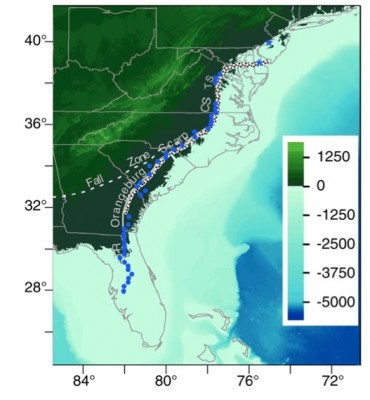 The East Coast shoreline, also known as the Orangeburg Scarp, as it may have appeared 3 million years ago.

Equally compelling is the fact that the shoreline is not flat, as it should be, but is distorted, reflecting the pushing motion of the Earth’s mantle.

This is big news, says Moucha, for scientists who use the coastline to predict future sea-level rise. It’s also a cautionary tale for those who rely almost exclusively on cycles of glacial advance and retreat to study sea-level changes.

“Three million years ago, the average global temperature was two to three degrees Celsius higher, while the amount of carbon dioxide in the atmosphere was comparable to that of today,” says Moucha, who contributed to a paper on the subject in the May 15 issue of Science Express. “If we can estimate the height of the sea from 3 million years ago, we can then relate it to the amount of ice sheets that melted. This period also serves as a window into what we may expect in the future.”

Moucha and his colleagues—led by David Rowley, professor of geophysical sciences at the University of Chicago—have been using computer modeling to pinpoint exactly what melted during this interglacial period, some 3 million years ago. So far, evidenced is stacked in favor of Greenland, West Antarctica and the sprawling East Antarctica ice sheet, but the new shoreline uplift implies that East Antarctica may have melted some or not at all. “It’s less than previous estimates had implied,” says Rowley, the article’s lead author.

Moucha’s findings show that the jagged shoreline may have been caused by the interplay between the Earth’s surface and its mantle—a process known as dynamic topography. Advanced modeling suggests that the shoreline, referred to as the Orangeburg Scarp, may have shifted as much as 196 feet. Modeling also accounts for other effects, such as the buildup of offshore sediments and glacial retreats.

“Dynamic topography is a very important contributor to Earth’s surface evolution,” says Rowley. “With this work, we can demonstrate that even small-scale features, long considered outside the realm of mantle influence, are reflective of mantle contributions.”

Moucha’s involvement with the project grew out of a series of papers he published as a postdoctoral fellow at the Canadian Institute for Advance Research in Montreal. In one paper from 2008, he drew on elements of the North American East Coast and African West Coast to build a case against the existence of stable continental platforms.

“The North American East Coast has always been thought of as a passive margin,” says Moucha, referring to large areas usually bereft of tectonic activity. “[With Rowley], we’ve challenged the traditional view of passive margins by showing that through observations and numerical simulations, they are subject to long-term deformation, in response to mantle flow.”

Central to Moucha’s argument is the fact that viscous mantle flows everywhere, all the time. As a result, it’s nearly impossible to find what he calls “stable reference points” on the Earth’s surface to accurately measure global sea-level rise. “If one incorrectly assumed that a particular margin is a stable reference frame when, in actuality, it has subsided, his or her assumption would lead to a sea-level rise and, ultimately, to an increase in ice-sheet melt,” says Moucha, who joined SU’s faculty in 2011.

Another consideration is the size of the ice sheet. Between periods of glacial activity (such as the one from 3 million years ago and the one we are in now), ice sheets are generally smaller. Jerry Mitrovica, professor of geophysics at Harvard University who also contributed to the paper, says the same mantle processes that drive plate tectonics also deform elevations of ancient shorelines. “You can’t ignore this, or your estimate of the size of the ancient ice sheets will be wrong,” he says.

Moucha puts it this way: “Because ice sheets have mass and mass results in gravitational attraction, the sea level actually falls near the melting ice sheet and rises when it’s further away. This variability has enabled us to unravel which ice sheet contributed to sea-level rise and how much of [the sheet] melted.”

The SU geophysicist credits much of the group’s success to state-of-the-art seismic tomography, a geological imaging technique led by Nathan Simmons at California’s Lawrence Livermore National Laboratory. “Nathan, who co-authored the paper, provided me with seismic tomography data, from which I used high-performance computing to model mantle flow,” says Moucha. “A few million years may have taken us a day to render, but a billion years may have taken several weeks or more.”

Moucha and his colleagues hope to apply their East Coast model to the Appalachian Mountains, which are also considered a type of passive geology. Although they have been tectonically quiet for more than 200 million years, the Appalachians are beginning to show signs of wear and tear: rugged peaks, steep slopes, landslides, and waterfalls—possible evidence of erosion, triggered by dynamic topography.

“Scientists, such as Rob, who produce increasingly accurate models of dynamic topography for the past, are going to be at the front line of this important research area,” says Mitrovica.

Adds Rowley: “Rob Moucha has demonstrated that dynamic topography is a very important contributor to Earth’s surface evolution. … His study of mantle contributions is appealing on a large number of fronts that I, among others of our collaboration, hope to pursue.”