Hydrologist named fellow of American Association for the Advancement of Science 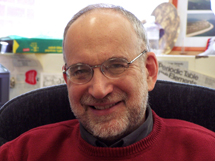 Donald Siegel, professor of Earth Sciences in Syracuse University’s College of Arts and Sciences, is one of the nation’s most well known, respected and admired hydrologists. His discoveries that much of the world’s potable groundwater found deeper than 600 feet is thousands of years old, and thus a non-renewable resource, coupled with his seminal work on groundwater flow and wetland diversity, are the makings of today’s textbooks. He has continued to advance international understanding of groundwater systems over a career spanning more than 40 years.

Siegel was recently named a fellow of the American Association for the Advancement of Science (AAAS) for distinguished service and pioneering contributions on the hydrogeology and biogeochemistry of wetlands and contaminant transport. The AAAS is the world’s largest general scientific society and publisher of the journal Science. The AAAS will recognize the 2013 class of Fellows on Feb. 16, 2013, during the association’s annual meeting in Boston.

Siegel was with the U.S. Geological Survey (USGS) from 1976 to 1982. During that time, he made his initial discoveries on deep groundwater deposits and discovered that groundwater flow largely controls the diversity of ecosystems in the world’s largest wetlands, called mires. For these discoveries, Siegel received the Birdsall Distinguished Lectureship and the Meinzer Award for Research by the Hydrogeology Division of the Geological Society of America (GSA). At the USGS, Siegel also explored how organic matter in water associated with oil spills interacts with the minerals in affected aquifers, how groundwater interacts with lakes and the westernmost edge where acid rain was being deposited by coal burning power plants.

Siegel continued working in these areas after his faculty appointment at SU in 1982, beginning with an exploration of how groundwater and deep saline waters moved through the Marcellus Shale millions of years ago to the present. The Marcellus Shale underlies much of the Appalachian Basin in the Eastern United States, including New York State’s Southern Tier.

Siegel’s wetland studies evolved to an exploration of how groundwater flow and water quality affect the production of methane and other greenhouse gases in large peat lands in northern Canada, Siberia and northern Minnesota, work that ties to global climate disruption today. Siegel is expanding his wetland research to include studies of smaller wetlands in the north central United States, which completely degrade toxic pesticides in a matter of days for reasons yet unknown.

Siegel’s early work on groundwater contamination helped close the Fresh Kills landfill on Staten Island. He recently began work on another landfill-related project in the American West, which involves using forensic techniques to differentiate between contaminants and the natural chemistry of the groundwater. He is studying the use of similar forensic techniques to characterize fluids produced by hydraulic fracturing and other unconventional gas and oil production in western China, Pennsylvania, Ohio and New York State.

Siegel holds a Ph.D. from the University of Minnesota, a master’s degree from Penn State University and a bachelor’s degree from the University of Rhode Island. He is a recipient of the Geological Society of American’s Distinguished Service Award, a lifetime associate member of the National Research Council (an arm of the National Academy of Sciences), and chairs the council’s Water Science and Technology Board. Siegel is a fellow of the Geological Society of America, author of more than 150 scientific articles and widely provides expert services to governmental agencies, industry, nonprofits and legal firms.

Siegel has been editor or co-editor of some of the most respected journals in the field, including Water Resources Research (1992-1995) Wetlands (1994-1997), Ground Water (1998-2001) and Geosphere, (2005-present) and served as the GSA Book Editor (2007-2012). Siegel received SU’s 2009 Laura J. and L. Douglas Meredith Professorship for Teaching Excellence and The College of Arts and Sciences’ 2003 Wasserstrom Prize for Graduate Teaching.