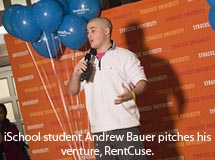 This was a different type of entrepreneurship competition, according to event founder Keisuke Inoue, a Ph.D. student and instructor at the School of Information Studies (iSchool). The forum focused solely on students’ ideas and concepts for apps, as opposed to a more diffused look at an idea along with its business plan. As an opportunity to “present, recognize and celebrate people who build systems,” the competition also represented a learning experience for students, Inoue explains. “The point is to show your idea to the general public or to judges who have expertise, and receive feedback, then you can then integrate that feedback into how to improve the app.”

The app uses video games as a means to engage people with the citizen science project of classifying species. Through photo identification and sorting, participants provide metadata and are encouraged to keep doing so through two games, one that is puzzle based and another that is story based. The app provides a functional value, while permitting researchers to study how various games and online engagement styles affect participation.

iSchool Ph.D. student Nathan Prestopnik, representing the project at the event, said that although the web site has only been live since October, 180 participants are involved in classification activity, and the competition offered a chance to obtain more exposure and more users.

Orange Events
When Rey Cortorreal was looking for something to do on campus one day, he felt that surfing SU’s Orange Events site on a laptop was inefficient since everyone uses smartphones these days. Cortorreal, a junior in the L.C. Smith College of Engineering and Computer Science, promptly built a mobile app that imports existing campus events calendar information and makes the data more easily accessible. His app lets users open a phone and immediately see what events are taking place in the next few hours. The app is now in demo mode, and Cortorreal says he is working to add various filters to enhance the level of event details provided.

Uvalue
Joshua Anderson, a Whitman undergrad and iSchool grad student, has a web app that allows students on campuses to share items and resources to make a profit. To him, events like the competition are “really about marketing. We’re brand new, and trying to make sure we have a presence and people know about us. Syracuse is our test market, so this gets the word out.” His company, founded officially in July, has a goal of promoting frictionless commerce and collaboration within college communities. He plans to use its winnings to make a commercial spot for web and media use.

Elbow Room
With its electrified Lego blocks demonstrating how Elbow Room counts people, the app, an innovation of L.C. Smith College of Engineering student Austin Williams, a computer engineer, and iSchool student Ryan St. Pierre, its operations and marketing manager, originated with the goal of finding a quiet place on campus to study. The app counts in real time the number of people who are occupying a specific space. For inventor Austin, the competition provided significant useful feedback. “I’ve heard so many different ideas from people today where they see this being used.” That includes not only campus use, but consumer, business and safety applications, he says.

iOpen Visualization
First-semester IM master’s iSchool student Rudy Rusli’s app, the winner of the journalism innovation category, takes public data and displays it visually as meaningful information, in this case permitting Indonesian citizens to draw conclusions about how their government is operating and any degree of corruption that exists, Rusli says. Using government agency public data, the app uses different kinds of visualization techniques to bring public awareness. The idea began when Rusli was asked by an Indonesian nonprofit to find a way to increase public awareness about what city governments were doing with public funds, and it combines his academic interest in promoting the effective use of information visualization.

CheckIt
Finding an efficient way to schedule multiple meetings every day with many people led to the idea for CheckIt, a drag-and-drop automated appointment-making system created by Blaine Killen, of both Whitman and the iSchool, and Yogesh Chadhari, a second-year iSchool student. By showing the availability of groups of people on screen, the app is useful for busy people who need to coordinate appointments and can do so easily and efficiently, without multiple emails or through a secretary, he explains. The app competition was useful, since “We have a lot of things we do, but we [learn], ‘What do people really care about’,” Killen notes.

Other student teams involved in the competition were:

The competition was held in concert with Entrepalooza, an event sponsored by the Raymond Von Dran IDEA (Innovation and Disruptive Entrepreneurship Accelerator) and Whitman School of Management at SU.