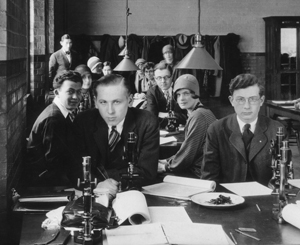 Nature is all about cycles—the circle of life. Likewise, the history of the Department of Biology in Syracuse University’s College of Arts and Sciences could be summed up in terms of life cycles. That cycle, which began 140 years ago, continues as older ideas give way to new discoveries and generations of new students, faculty and alumni build on the legacy of their predecessors.

The lifecycle of SU’s Department of Biology is meticulously recorded in a recent book by former department chair and Professor Emeritus H. Richard Levy, “Biology at Syracuse University, 1872 – 2010” (Syracuse University Press, 2012). The book was conceived in 2006 when construction began on the new Life Sciences Complex.

“The pending opening of the new Life Sciences Complex … seemed an opportune occasion for making a history of the department available,” Levy writes in the book’s preface. However, once Levy started digging into the University’s archives, it became clear that the book could not be completed in time for the building’s opening celebration on Nov. 7, 2008. Instead, a short brochure was developed with a tantalizing preview of what was to come.

The new book is the culmination of countless hours combing through disparate documents and artifacts housed in SU Archives, departmental reviews, committee deliberations, faculty biographies and other historical records. The book is believed to be the first publication of a departmental history at SU.

In 1872, just 13 years after Charles Darwin first published his revolutionary “On the Origin of Species,” Alexander Winchell, SU’s first chancellor, taught the first general biology course in what was then the Department of Geology, Zoology and Botany. Winchell and his successor, Lucien Underwood, took issue with Darwin’s views on evolution, which, according to Levy, likely influenced the department’s early curriculum. However, Levy notes that SU began offering courses in bacteriology as early as 1891, earlier than Harvard or Cornell.

By 1907, the study of biology was split among three departments—bacteriology, zoology and botany. The Department of Zoology remained independent for almost 70 years, while the other two departments cycled through different names and combinations. Almost a century would pass before the disciplines were again unified. The unified Department of Biology was created in 1970 and Donald Lundgren was appointed the inaugural chair.

“Biology at Syracuse University” is a treasure trove of anecdotes, biographical sketches, images and first-person reminiscences from and about dozens of alumni and faculty who passed through SU’s corridors from the late 19th century to the early part of the 21st century. It’s a snapshot of how the many disciplines within biology have evolved and of the revolutionary discoveries that shaped today’s curriculum and research programs—and will continue to transform the department’s circle of life for generations to come.