Research at the interface of physics and biology 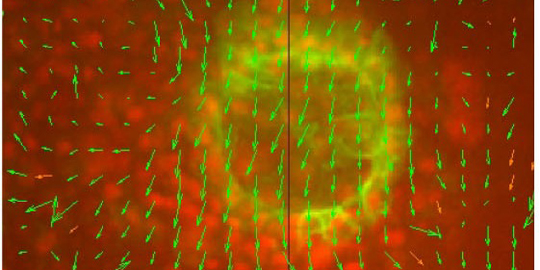 On the surface, it would seem that zebrafish and humans are about as different as, say, developmental biologists and theoretical physicists. Fish swim; humans walk. Biologists revere Charles Darwin; physicists have an abiding admiration for Albert Einstein. It turns out, however, that zebrafish and humans are very similar during the earliest stages of embryonic development. So much so, that developmental biologists study zebrafish embryos to help answer such questions as how do organs end up on the correct side of the human body?  Turns out, the question is also interesting to a Syracuse University physicist. M. Lisa Manning, a theoretical physicist in SU’s College of Arts and Sciences, and Jeffrey D. Amack, a developmental biologist at the State University of New York (SUNY) Upstate Medical University, have teamed up to study how and why a specialized group of cells change shape during the earliest stages of embryonic development, and how this process influences the formation of organs and their proper alignment in the body. Disruptions of the process can lead to such disorders as congenital heart disease in infants.While theirs is an unusual collaboration, it has proved very fruitful for Manning and Amack, yielding two publications in less than a year, one of which is a review in Science, the prestigious flagship publication of the American Association for the Advancement of Science (AAAS).  The review, “Knowing the Boundaries: Extending the Differential Adhesion Hypothesis in Embryonic Cell Sorting,” is part of a special issue, published Oct. 12, focusing on “Forces in Development.”

“We were invited to review recent research about how physics provides insight into developmental biology and suggest new ways to move forward in the field,” says Manning, who is also a member of the Syracuse Biomaterials Institute. “It was very exciting to be asked because it means the editors respect the work we are doing.”

Amack and Manning published a study in the journal Developmental Biology that focused on cell shape changes in early embryonic development. The study, “Regional cell shape changes control form and function of Kupffer’s vesicle in the zebrafish embryo,” was published online July 26 and appeared in print Oct. 1.

“We image live zebrafish embryos as they are developing in real time,” Amack says. “We found that the cells change shape over time and knew that we could manipulate that process in ways that alter heart development. But we didn’t understand the physical interactions or mechanical forces at work among the cells and how that may also influence the process.”

However, this is an area that piques Manning’s interest and one in which she began thinking about as a post-doc at Princeton University.  She and Amack met through an informal developmental biology interest group comprised of researchers from both SU and SUNY Upstate, co-organized by Amack and Katharine Lewis, associate professor of biology in SU’s College of Arts and Sciences.

“It was an immediate match,” Manning says of their meeting. “Jeff observed shape changes that couldn’t be fully explained from a biochemical or cell-signaling perspective. I think about the physics at work inside the biological system. It’s the same whether we are trying to explain forces at work in crystals or living cells. If you can write it down as a theory, and if the math is the same, you can work in both areas.”

Amack invited Manning to review his research. “She generated models that added significant insight into our findings,” Amack says. “The biology community largely ignores the physics of the system because it is an area we often just don’t understand. Lisa looked at our results through the eyes of a physicist. Her work laid the foundation for future collaborations between our two groups.”

Manning agrees and also views the publication in Developmental Biology as a first step that yielded promising areas for further inquiry. “Very little is known about how cells behave in their natural environment during early embryonic development,” she says. “Jeff works with embryos in real time. I can make suggestions about experiments based on physical theories; he improves the theories with input from biological experiments.  A better understanding of the interfacial tension (forces) between cells will help explain a large number of processes at the earliest stages of embryonic development.”

And, on a final note, Manning says she also reveres Charles Darwin.