With every bodily movement—from the blink of an eye to running a marathon—nerve cells transmit signals to muscle cells. To do that, nerve cells rely on tiny molecular motors to transport chemical messengers (neurotransmitters) that excite muscles cells into action. It’s a complex process, which scientists are still trying to understand. A new study by Syracuse University researchers has uncovered an important piece of the puzzle.

The study, published in the April 22 issue of the Journal of Biological Chemistry (JBC), describes the discovery of a protein that is involved in the motor-cargo mechanism that carries neurotransmitter chemicals to the nerve cell’s synapse. The synapse is the junction at which electrical and chemical signals are transmitted from one nerve cell to another cell. JBC is the premier journal of the American Society for Biochemistry and Molecular Biology. 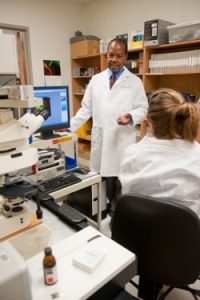 The discovery was made by a team of scientists led by George M. Langford, a cell biologist and dean of SU’s College of Arts and Sciences. Team members included research associate Torsten Wollert and assistant professor Michael Cosgrove in the Department of Biology; and collaborators from Dartmouth College, the Marine Biological Laboratory at Woods Hole, and the McLaughlin Research Institute. The study was funded by the National Institutes of Health.

“The transportation of neurotransmitter vesicles to the synapse is critical to nerve cell function,” Langford says. “We want to better understand all of the molecular components involved in the transport process. We have discovered another ‘hitch’ that links the motor to its cargo.”

New insights into how the chemicals are transported could result in new kinds of drug therapy for such illnesses as Parkinson’s disease, depression and injuries to the neuromuscular system, Langford says.

Neurotransmitters, produced by nerve cells, are used to signal cells in every organ system in the body—from muscles to metabolism. The chemicals are packaged in small sacs called synaptic vesicles. The motors transporting these vesicles are composed of a protein called myosin-Va (Myo5a). Until now, it was not clearly understood how the Myo5a motor attached to the vesicle. In a series of experiments, Langford’s team demonstrated, for the first time, that Myo5a forms a complex with the protein Rab3A, which serves as the ‘hitch’ that snags the synaptic vesicle.

By understanding how the process works in normal cells, it’s possible for scientists to find ways to turn off a malfunctioning transportation system, Langford says.  For example, over-production of the neurotransmitter dopamine has been linked to depression and other mental illnesses. It may be desirable to develop drugs that prevent dopamine from being transported. Likewise preventing the transportation of muscle-contracting neurotransmitters could ease painful muscle spasms associated with Parkinson’s disease and severe, nervous system injuries.

In addition to his work on cellular transport mechanisms, Langford is researching ways to produce more effective drugs to treat Candida albicans, a fungus that causes infections in humans.