Engineers at SU’s L.C. Smith College of Engineering and Computer Science collaborate with University of Minnesota on new intelligent systems and grooved designs

One issue confronting the efficiency of wind as a promising renewable energy source is the wind itself—specifically, its changeability. While the aerodynamic performance of a wind turbine is best under steady wind flow, the efficiency of the blades degrades when exposed to conditions such as wind gusts, turbulent flow, upstream turbine wakes and wind shear.

Now, a new type of air-flow technology may soon increase the efficiency of large wind turbines under many different wind conditions. 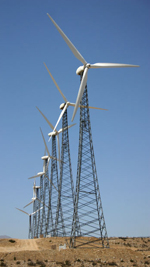 Researchers from Syracuse University’s L.C. Smith College of Engineering and Computer Science (LCS) are testing new intelligent-systems-based active flow control methods with support from the U.S. Department of Energy through the University of Minnesota Wind Energy Consortium. The approach estimates the flow conditions over the blade surfaces from surface measurements, and then uses this information in an intelligent controller to implement real-time actuation on the blades to control the airflow and increase the overall efficiency of the wind turbine system. The work may also reduce excessive noise and vibration due to flow separation.

The team is also investigating a characteristic airfoil in a new anechoic wind tunnel facility at SU to determine the airfoil lift and drag characteristics with appropriate flow control while exposed to large-scale flow unsteadiness. In addition, the effects of flow control on the noise spectrum of the wind turbine will be also assessed and measured in the anechoic chamber.

“It is exciting for us to be involved in the world-class wind energy consortium led by the University of Minnesota,” says Glauser, professor of mechanical and aerospace engineering.  “This is a wonderful opportunity to transition our expertise in intelligent systems for flow control, developed largely through support from the aerospace sector, to this important and growing area of the renewable energy sector.’’

Scientists at the University of Minnesota are looking at another inefficiency with wind energy—the drag, which is the resistance felt by the turbine blades as they beat the air.  The team at the University of Minnesota’s Saint Anthony Falls Lab (SAFL) looked at the effect of placing tiny grooves on turbine blades on drag reduction. The grooves are in the form of triangular riblets scored into a coating on the blade surface.  They are so shallow (between 40 and 225 microns) that they can’t be seen by the human eye—leaving the blades looking perfectly smooth. Through wind-tunnel tests of 2.5-megawatt turbine airfoil surfaces (becoming one of the popular industry standards) and computer simulations, they have looked at the grooves’ efficacy for various groove geometries and angles of attack (how the blades are positioned relative to the air stream).

Both of these new ideas for enhancing the efficiency of wind turbines were recently presented at the American Physical Society Division of Fluid Dynamics meeting in Long Beach, Calif. On Nov. 21, the SU research team presented “Benefits of Active Flow Control for Wind Turbine Blades,” and researchers at the University of Minnesota presented “On the skin friction drag reduction in large wind turbines using sharp V-grooved riblets.”