Syracuse University is slimming down its waste stream and getting greener. A new composting program is diverting several tons of food waste away from SU Food Services’ dumpsters each month and returning it back to its organic origins. The joint effort with Onondaga County Resource Recovery Agency (OCRRA) has yielded approximately 30 tons of food waste for composting since the program began last semester. 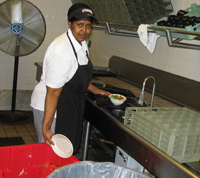 Composting SU’s food waste is eco-friendly because it’s a form of waste recycling. Instead of simply discarding the waste and ending its life cycle, composting transforms this valuable resource into a new and useful product for the community. The end result is a nutrient-rich soil amendment that local residents can use instead of chemical fertilizers on their lawns and gardens to sustain plant life. According to the U.S. Environmental Protection Agency (EPA), compost is also beneficial in helping soil retain moisture and to control soil erosion near bodies of water, and the composting process has been shown to help clean up contaminated soil.

“The entire composting program has been going really well,” says Mark Tewksbury, assistant director for Food Services. “We made a smooth transition getting the program started thanks to a lot of hard work and cooperation from our staff. It’s been a great team effort all around and OCRRA has been very helpful in making this process a success.”

The idea to begin composting was generated by a student who had contacted the Office of the Chancellor. This prompted SU’s Sustainability Division, Food Services and Physical Plant to develop a proposal for the program, which showed that its startup costs could be recouped in four years. The University gave the program the green light and the Syracuse University Recycling and Composting Committee (SURCC) got to work on implementing it. SURCC, consisting of the proposal’s authors, as well as other staff members, students and representatives from OCRRA, took just over six months to launch the program.

“Listening to students and putting their ideas into action is just one of the things we do,” says Steve Lloyd, associate director for SU’s Sustainability Division. “Hopefully this success will inspire other ideas from not only students, but faculty and staff as well. SU Food Services and everyone involved on the recycling committee did a great job of getting the composting program up and running so quickly. It’s another program being done to create a more sustainable campus and community. Partnering with OCRRA is always fruitful.”

SU Food Services’ Commissary and all eight of its major campus dining locations sort and collect a variety of food waste behind the scenes; most of it is fruit and vegetable matter discarded during food preparation, along with some uneaten food left on dining trays and a small amount of leftovers. Every couple of weeks, or as needed, it’s delivered to OCRRA’s Amboy Compost Site in Camillus. There, the food waste interacts with the right mix of fresh air and yard-waste mulch for about 30 days, converting it all into dark, rich organic compost.

“Mark [Tewksbury] and his group are doing a phenomenal job of separating the composting material,” says Greg Gelewski, recycling operations manager for OCRRA. “I commend SU for the great work.”

Lynda Hamilton, Brockway Dining Center manager, and her staff found it easy to start collecting the food waste. “It wasn’t hard to get composting up and running here,” says Hamilton. “I announced it at a couple of our meetings and we did some training for staff. We also posted some handouts from OCRRA to help educate and remind staff. Everyone was pretty much on board with it from the start.”

“It’s exciting to see that this program has grown so quickly and successfully,” says Tewksbury. “Decreasing the amount of garbage we generate is certainly helping the University lessen its impact on the environment.”

For more information about campus sustainability initiatives, including SU’s Climate Action Plan efforts to create a climate-neutral campus by 2040, visit the University’s Sustainability website at http://greenuniversecity.syr.edu. To discuss a green idea to implement on campus, contact SU’s Sustainability Division at sustain@syr.edu.