During an awards banquet Feb. 5 at the 2010 iConference at the University of Illinois at Urbana-Champaign, Syracuse School of Information Studies (iSchool) Dean Elizabeth D. Liddy presented the first ever Raymond F. von Dran Award to Toni Carbo. 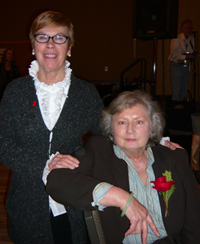 Carbo, professor in the College of Information Science and Technology (iSchool) Center for Graduate Studies at Drexel University, was one of the original “gang of three” deans who first worked together to explore and define the emerging field of information. As dean of the University of Pittsburgh’s School of Information Sciences, she proposed the regular meeting of deans of information schools in 1988 and then resurrected the group again in the late 1990s after attention started to wane.

“Toni again called together the gang and insisted that they get serious about defining and explaining the field of information,” Liddy says. “She exerted her leadership, and the group grew to 10 schools and then 12, until the term ‘gang’ was no longer an appropriate title and the iSchool caucus was introduced. So now, with 27 iSchools represented, we’re jointly presenting this award.”

The award is given in honor of Raymond F. von Dran, who served as dean for a total of 24 years at three different library and information science schools, including the Syracuse University School of Information Studies from 1995-2007. A founding member of the I-Schools Group (now the iCaucus)—an international consortium of academic institutions focused on the relationship between information and people—von Dran was among a core group of visionaries who helped define the newly emerging academic field of information studies, examining how information, in all its forms, expands human capabilities. The iSchool deans present the $5,000 award to recognize leadership in the field of information, especially those individuals who share some of von Dran’s personal qualities.

A tearful Carbo accepted the award, recalling her friendship with von Dran and the key moments in her own life that led her to a career in the information field. “To be the first recipient of the award that honors Ray is so very special to me,” she said. “We just had an idea to bring a few people together and look what it has turned into! Not because of what I did, but because of what all of you have done.”

She also stressed the importance of focusing on people, content and technologies. “We are not T schools,” she said. “We are iSchools. I hope you remember that.”

She concluded by recalling her last conversation with von Dran, who died unexpectedly in July 2007 after stepping down as dean of the Syracuse University iSchool. The two former deans discussed “life after deaning” and the possibility of forming a special interest group of former iSchool deans who could act as mentors to new deans.

“Very sadly, Ray never got to experience that life after deaning,” said Carbo, who dressed all in black in honor of von Dran. “But I know that Ray’s spirit is with us today and that if we keep focusing on his wonderful sense of humor and his high vision and work with these talented young people here today we will shape the future of the information field the way he’d want it to be shaped.”