As the nation’s highest-ranking military officer, U.S. Army General and Chairman of the Joint Chiefs of Staff Mark Milley keeps a busy schedule that includes briefings and strategy sessions with other top officials in the Pentagon and White House.

But, on a Thursday in early October, he carved out four hours to share his expertise with a group of Maxwell School graduate students and fellows from the school’s home in Washington, D.C., the Center for Strategic and International Studies (CSIS). 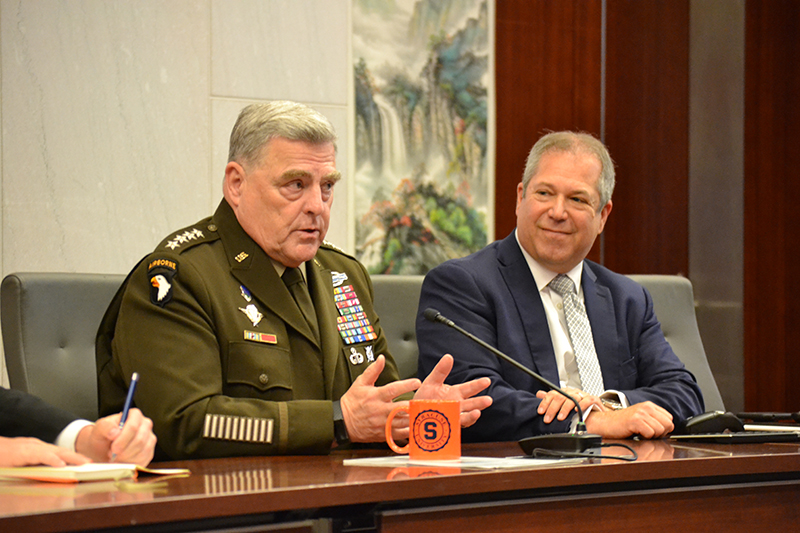 “He spoke with openness about an incredibly broad range of regional security and Department of Defense programmatic issues,” says Mark Jacobson, assistant dean for Maxwell’s Washington programs. “I still have students coming up to me and saying this was the greatest part of their graduate education so far.”

Jacobson has also heard from fellows at CSIS who were pleased to have been included. In other instances, it has been Maxwell students sitting in on CSIS-led events.

The visit by Milley is representative of the unique experiences and exposure that benefit students in Maxwell’s Washington programs. It’s also an example of the mutually beneficial relationship between Maxwell and CSIS that began in 2013, when the think tank moved into its new home on Rhode Island Avenue.

The partnership paved the way for the 2018 launch of Maxwell’s executive master’s in international relations (I.R.) degree program for mid-level professionals. Students benefit from exposure to seasoned practitioners like Stephen Lennon, who served as coordinator for the International Organization for Migration’s efforts to support Afghan evacuees in the United States, and CSIS fellows who teach in the program.

Hundreds of students participate in coursework at CSIS every year. They include executive master’s in I.R. students spending a summer, semester or intercession taking courses or completing faculty-supervised internships, as well as students interested in public diplomacy, who complete an intense, one-week journalism practicum at CSIS. Undergraduates also take part in the Washington Semester Program.

Jacobson joined the program two years after the executive master’s program was launched. His hiring was strategic: Maxwell Dean David M. Van Slyke said at the time that his “expertise can further strengthen our connections to CSIS, grow the strength and visibility of our academic programs, and deepen the school’s relationships with the D.C. community.”

Jacobson played a critical role in the addition last year of former Secretary of the U.S. Army Ryan D. McCarthy as a Dean’s Scholar in Residence. Jacobson and McCarthy drew Milley as a speaker.

Likewise, Jacobson has also overseen the hiring of an impressive roster of adjunct faculty, including Lennon, James-Christian Blockwood, executive vice president of the nonpartisan, nonprofit Partnership for Public Service, and Danica Starks, senior U.S. commercial liaison and advisor to the U.S. executive director of the World Bank.

In November, Jacobson hosted a post-election panel featuring top political analysts and journalists with moderator Shannon Monnat, professor of sociology, Lerner Chair in Public Health Promotion and Population Health and director of the Center for Policy Research. Titled, “The Midterms of 2022: What Happened and What’s Next?” its audience included alumni from the D.C. area and fellows at CSIS.

“Our relationship with CSIS brings a lot of synergy to our programming in Washington, D.C., and unparalleled opportunities for our students,” says Jacobson. “We are fortunate to be housed within one of the greatest think tanks in the world.”

John Hamre, president of CSIS, echoes his sentiment. He says, “CSIS is committed to improving public policy and quality governing. Our efforts are greatly strengthened by the partnership with Maxwell.”