Former Secretary of the U.S. Army Ryan D. McCarthy has joined the Maxwell School’s Washington, D.C., office as a Dean’s Scholar in Residence. He is joined this academic year by eight scholars and senior-level practitioners who are sharing their expertise with students as adjunct professors in Maxwell’s Washington undergraduate and graduate programs. 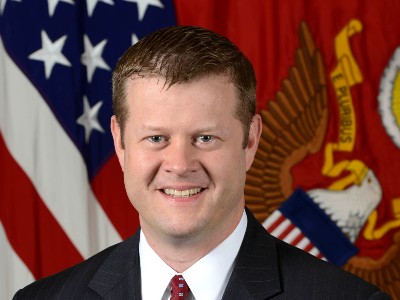 McCarthy, whose yearlong appointment began at the start of the spring 2022 semester, brings expertise from senior appointments at the Department of Defense under three U.S. presidents, service on Capitol Hill and from several private sector roles. At Maxwell, he is serving as a strategic advisor, subject matter expert and mentor. Additionally, he will provide lectures, participate in Maxwell’s National Security Management Seminar and lead a graduate-level seminar during fall term 2022.

“Ryan is a highly regarded public servant, a true bipartisan leader who has served presidents from both parties and whose reputation for dependable and selfless service is shared by senior leaders throughout Washington, D.C.,” says Mark Jacobson, assistant dean for Maxwell’s Washington, D.C., programs, which are headquartered at the Center for Strategic and International Studies (CSIS).

McCarthy is no stranger to the classroom. In addition to a score of guest lectures, he currently leads an undergraduate seminar at the U.S. Military Academy at West Point. “Having hosted Secretary McCarthy in my classrooms on several occasions, I’m eager to have him engage with and mentor our students more regularly on the value of public service, principled leadership and working with bureaucracy and through bureaucratic challenges,” says Jacobson.

During his tenure as secretary of the Army under President Donald Trump, from 2019-2021, McCarthy is credited with spearheading ambitious modernization efforts. Prior to the appointment, he served as the 33rd undersecretary of the Army and as a special assistant to Secretary of Defense Robert Gates during both the Barack Obama and George W. Bush administrations.

His private sector experience includes sequential vice president roles with Lockheed Martin Corporation and as a vice president at HSBC North America. He is a graduate of the Virginia Military Institute and holds an MBA from the University of Maryland Robert H. Smith School of Business.

Jon B. Alterman, senior vice president, Zbigniew Brzezinski Chair in Global Security and Geostrategy and director of the Middle East Program at CSIS. Prior to joining CSIS in 2002, he served as a member of the policy planning staff at the U.S. Department of State and as a special assistant to the assistant secretary of state for Near Eastern affairs, and from 2009-19 served as a member of the Chief of Naval Operations Executive Panel. In addition to his policy work, he often teaches Middle Eastern studies at the Johns Hopkins School of Advanced International Studies and the George Washington University.

Stephen Lennon, coordinator for the International Organization for Migration’s efforts to support Afghan evacuees in the United States. His previously held several roles at the U.S. Agency for International Development’s (USAID) Democracy Conflict and Humanitarian Assistance bureau, including as the director of the Office of Transition Initiatives. While there, he advised on organizational transformation, policy and collaboration. Previous posts also include work with the United Nations’ International Organization for Migration.

Nina Jankowicz, an internationally recognized researcher and expert on disinformation and democratization. She has advised governments, international organizations and tech companies; testified before Congress and European Parliament; and led research about the effects of disinformation on women, minorities, democratic activists and freedom of expression around the world. Since 2017, she has held fellowships at the Wilson Center, where she has been affiliated with the Kennan Institute and the Science and Technology Innovation Program.

Tammy S. Schultz, director of national security and a professor of strategic studies at the U.S. Marine Corps War College. She is also a member of the Council on Foreign Relations and a non-resident senior fellow at the Atlantic Council. Additionally, she works as an adjunct professor in Georgetown University’s Security Studies Program and conducts communication plenaries and simulations for foreign services officers with the State Department. She was previously a fellow at the Center for a New American Security, at the U.S. Army’s Peacekeeping and Stability Operations Institute and at the Brookings Institution.

Arthur Sidney, vice president of public policy for the Computer and Communications Industry Association who served as chief of staff and chief counsel and legislative director to two senior members of Congress for over 12 years. He also previously worked as an attorney for the Department of Commerce for nearly 10 years and has been an adjunct professor teaching various subjects at area law schools and universities since 1999.

Sean McFate, a senior fellow at the Atlantic Council, professor of strategy at Georgetown University’s School of Foreign Service and the National Defense University and an advisor to Oxford University’s Centre for Technology and Global Affairs. He’s an expert on 21st-century war and changing international relations and mercenaries who serves as a consultant to the Pentagon, CIA and the film industry. He served as a private military contractor and with the paramilitary and served in the private sector, including as a vice president at TD International.

Kathleen J. McInnis, a specialist in international security at the Congressional Research Service and nonresident senior fellow with the Scowcroft Center for Strategy and Security’s Transatlantic Security Initiative and Forward Defense practice. She has worked as a research consultant at Chatham House in London and in the Office of the Secretary of Defense. Previously, McInnis spent several years at CSIS, analyzing U.S. nuclear weapons strategy, strategic capabilities, NATO, European security and transatlantic relations.

“Effective governance requires a collaboration across levels of government, with different sectors of the economy, and with nonprofit organizations at the domestic and international level,” says Maxwell School Dean David M. Van Slyke. “Our students in Washington, D.C., and in Syracuse will benefit richly from the experiential and professional opportunities that these public service leaders will provide in collaboration with academic faculty. We are excited to welcome them.”