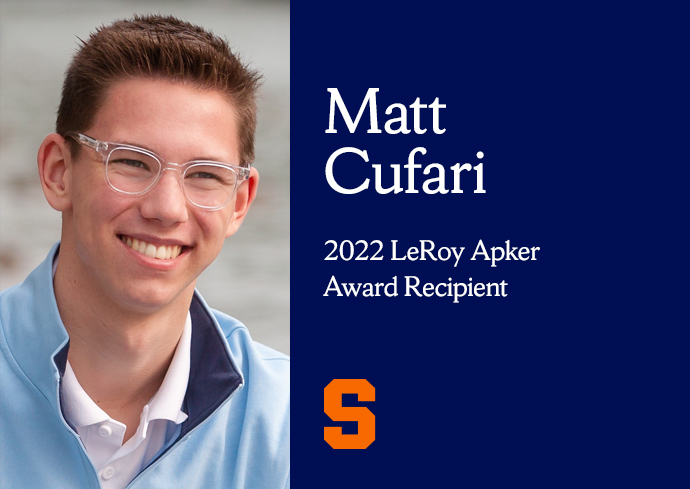 The prestigious award, given to just two students per year, recognizes outstanding undergraduate research and is the highest honor awarded to undergraduate physicists in the United States. Cufari is the first Syracuse University student to receive the award in its 44-year history.

“Receiving the Apker award is a tremendous honor. I’m incredibly grateful for the encouragement from Professor Coughlin and Professor Ross in pursuing physics at SU and in applying for this award,” says Cufari. “The support and contributions of Professors Coughlin and Ross, and Professor Chris Nixon at the University of Leicester, cannot be overstated.”

Cufari is recognized for verifying the Hills Mechanism as a viable method to generate repeating partial tidal disruption events (TDEs). At Syracuse, he studies TDEs under the supervision of Eric Coughlin, assistant professor of physics in the College of Arts and Sciences.

His work investigates an exciting new field of repeating partial TDEs—where a star is on a bound orbit about a supermassive black hole in a distant galaxy and is repeatedly stripped of its outer envelope through tidal interactions with the black hole. “The mass lost by the star feeds the black hole and generates an ‘accretion flare’ that illuminates the galaxy,” says Coughlin. “The detection of these events—now numbering on the order of tens per year but predicted to be many more in the future as survey science becomes more advanced—yields fundamental insight into the properties of black holes and stars in galactic nuclei.”

Cufari’s work highlights a mechanism for placing the star onto its tightly bound orbit, where the star was originally part of a binary star system and “captured” by the black hole—the Hills Mechanism. In an article in the April 20, 2022, issue of Astrophysical Journal Letters, Cufari used a combination of analytic arguments and numerical simulations to demonstrate that this mechanism can generate repeating partial tidal disruption events and applied it to a specific system, known as ASASSN-14ko. “This work is fundamental and theoretical and promotes a new pathway for creating periodic and energetic outbursts from supermassive black holes,” says Coughlin.

This summer, with undergraduate research grant funding from the Syracuse Office of Undergraduate Research and Creative Engagement (SOURCE), Cufari traveled to the University of Leicester in the United Kingdom. There, under the direction of Chris Nixon, associate professor of theoretical astrophysics, he performed simulations of partial TDEs and analyzed the properties of partially disrupted stars.

“Matt Cufari is a superstar student. As with previous Apker winners, we anticipate a long and distinguished career in physics,” says Jennifer Ross, professor and chair of physics in the College of Arts and Sciences, who nominated Cufari for the award. “We anticipate that Matt will not be the last Syracuse Apker winner, but he is an extraordinary first one.”

Cufari developed a passion for plasma theory and nuclear fusion as a high school student when he began doing research at the University of Rochester Laboratory for Laser Energetics. There, he worked on a project to develop a theoretical framework for images of charged fusion products.

His studies at Syracuse have given him skills in designing physical models of complex systems and solving problems mathematically. “In addition to my work in physics, my coursework in computer science has helped me to understand technologies like reinforcement learning and apply them to my research,” he says.

In his first semester at Syracuse, Cufari joined a research project in the quantum information lab of Britton Plourde, professor of physics, developing a parameter estimation software for superconducting circuits. Since his sophomore year, Cufari has worked with Coughlin researching theoretical astrophysics.

He is a member of the Tau Beta Pi engineering honor society, the American Astronomical Society and the Society of Physics Students. Cufari plans to earn a Ph.D. in physics and pursue a career in astrophysics research.