In December 2012, the Syracuse University men’s basketball team narrowly defeated the University of Detroit in front of almost 18,000 cheering fans in the Dome. It was the 900th win for head coach Jim Boeheim—but he didn’t feel celebratory.

Just a few days earlier, a 20-year-old gunman walked into Sandy Hook Elementary School in Newtown, Connecticut, and took the lives of 26 people, including 20 children.

Boeheim ’66, G’73 reflected on his sentiment in the shooting’s aftermath before a packed auditorium in the Maxwell School of Citizenship and Public Affairs on Friday, Sept. 9. He shared the stage with Chris Faricy, associate professor of political science and inaugural Hicker Family Professor in Renewing Democratic Community. 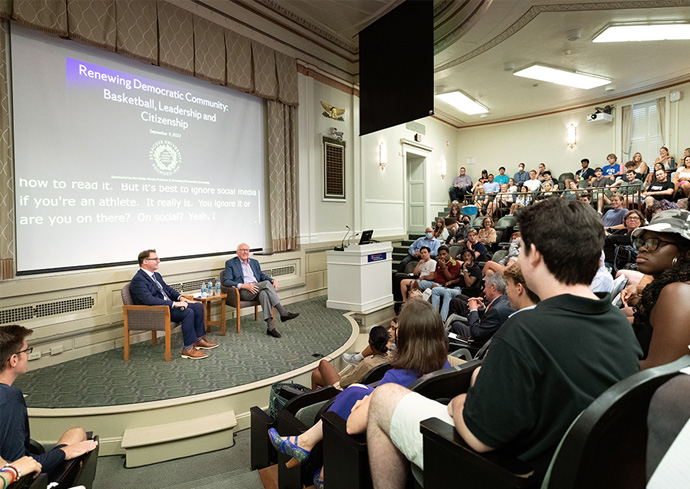 “You know, you just do what your heart tells you to do,” said Boeheim. “I felt it that night, and I still feel that way. …We have more gun violence deaths than all the other countries in the world put together and that’s not changing until the politics change. I am realistic about that.”

The event, titled “Renewing Democratic Community: Basketball, Leadership and Citizenship” was the first to be offered in the Hicker Family Professor Speaker Series that celebrates the creation of the professorship with a generous gift from Boeheim’s former Orange teammate, George Hicker ’68, and his wife, Kathy. The Hickers hope to advance civil discourse and mutual understanding in today’s polarized political climate.

Boeheim credited George Hicker for his generosity and community service, a theme of his remarks during the conversation-style event. “We can talk about a lot of things today, and I hope we do, but for me, an important question is always, ‘What are you giving back? What are you doing for the other people in the world?’” said Boeheim to the audience. “I’ve been fortunate to have a platform and we’ve been able to give back a lot to our city and our community.”

What are you giving back? What are you doing for the other people in the world? I’ve been fortunate to have a platform and we’ve been able to give back a lot to our city and our community.”

That proved a segue to Faricy’s first question: What responsibility do players have to provide service to the community? Boeheim said that though his athletes keep busy schedules between academic responsibilities, training and games, they are involved with the local Boys and Girls Club and support other organizations like Make-A-Wish and the Jim and Juli Boeheim Foundation.

Faricy then asked the coach to share his thoughts on the Supreme Court ruling last year that allows NCAA athletes to make money from business ventures without losing their eligibility. The changes removed prohibitions that prevented athletes from selling the rights to their names, images and likenesses (NIL).

Faricy pointed out that after the ruling, his 5-year-old son was able to get an autograph during a special appearance by former standout player Cole Swider. Boeheim shared that his son, former player Buddy Boeheim, also benefitted from the ruling, earning income from a line of “Buddy Buckets” merchandise and appearances.

But, the coach said, the rulings have not been without problems. For instance, recruitment of student-athletes has become significantly more competitive. And international athletes are ineligible to take advantage of the NIL ruling because of visa work restrictions, thus creating inequities. “NIL was a great idea if it was organically done with Cole Swider giving autographs,” he said, adding, “There are no guardrails, and there’s nothing to change it. The Supreme Court came and voted that every player can get whatever it is. …It is what it is, and we adjust to it.”

Boeheim recalled how his friend, NBA legend LeBron James—an outspoken advocate for social justice—was criticized by a media commentator who suggested he “shut up and dribble.”

Faricy then asked him about the role of athletes in the social justice movement. The coach shared how he encourages his players to register to vote and visit the polls—“a small step,” he conceded. He said that when he arrived at the University his freshman year, roughly 32 of 9,000 students were Black and of them, about “30 of them were athletes.”

Faricy pointed to the diverse audience of mostly students. “When you look around this classroom, there’s much more diversity,” he said, noting that a frequent topic in his classes is the tension between the progress that has been made and how much work still needs to be done. He asked Boeheim what he heard from his players following the killings of Breonna Taylor and George Floyd, for instance.

The coach told him, “I don’t think there are many people who didn’t understand that this was a pivotal moment, and it shouldn’t have been because there were pivotal moments two years before that, and five years, and 10 years earlier.” 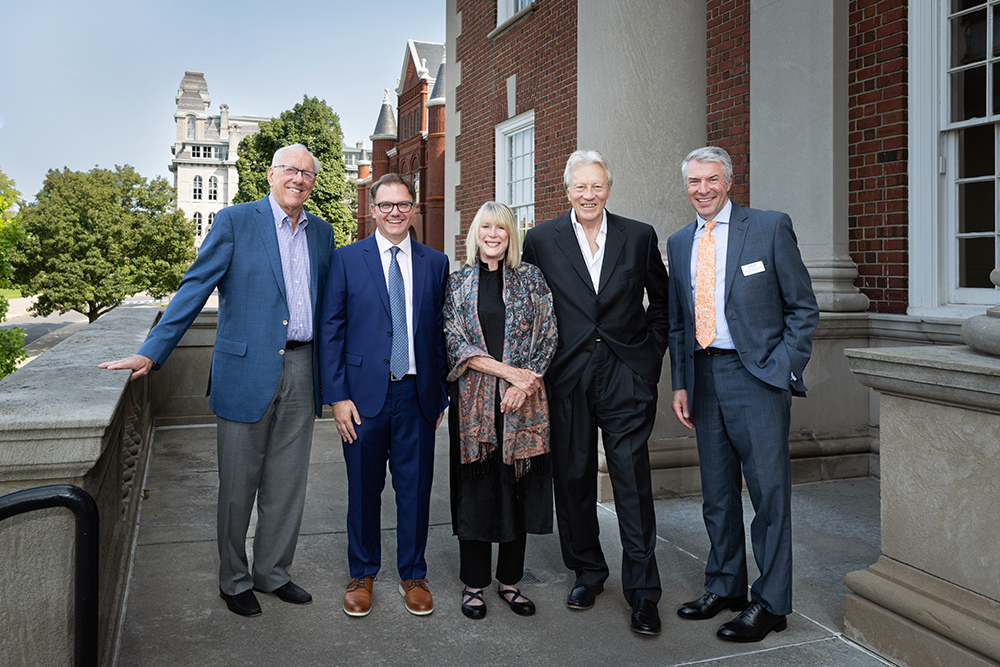 Leadership was another frequent topic during the talk—Boeheim shared how he was positively influenced by the example set by his fellow Orange athlete and roommate, Dave Bing ’66, who went on to become a National Basketball Association all-star and mayor of Detroit. “He had a tremendous effect on me,” he said. “He showed me how I should be, how I should treat people.”

Intertwined in Boeheim’s remarks were life lessons gleaned from decades on the court. He shared how he was a walk-on player, told by some that he would never succeed. “Don’t ever let anyone tell you that you can’t do something,” he said. And then, a few minutes later, a message of perseverance: “Everything is fine when you’re winning—you find out who you are when you’re losing.”

After the hour-long conversation between Faricy and Boeheim, the audience was invited to ask questions. The first was posed by a sophomore policy studies major who wondered how students can be more engaged in the greater Syracuse community.

The question clearly struck a chord with the coach and provided him an opportunity to again impart his message that giving back is an underpinning of citizenship—a lesson often echoed within Maxwell School classrooms. There are numerous opportunities to get involved, Boeheim told the audience, but one organization that could especially use the support is the Boys and Girls Club.

“They would welcome any help they could get,” he said. “You don’t realize it, but sometimes the only food those kids get that day is there.”