Community issues play out on many public stages: at government meetings, in newspaper columns, on social media platforms. Using short-form theatrical performances to explore local concerns and social justice issues is a newer concept, and it’s one that Associate Professor Gail Bulman will examine through her Fulbright Global Scholar award.

Bulman, a faculty member in the department of Languages, Literatures and Linguistics in the College of Arts and Sciences, teaches courses on Latin American theater and literature. She will travel to Argentina, Peru and Spain in the spring to research the community-based artistic form Microteatro (“micro theater”), which was founded in Madrid in 2009. In those places, she plans to learn from the actors, directors, playwrights and support personnel who create and stage the Microteatro, short plays that are centered on one theme and are part of a transnational theater network.

This group of venues now active in Spain, Argentina, Colombia, Dominican Republic, Mexico, Peru and Miami presents theatrical works of 15 minutes for audiences of 15 spectators conducted in multiple theater spaces of less than 15-by-15 square meters. The rooms are grouped together with an added, central space for a bar/restaurant and socializing. The plays are presented multiple times each evening for rotating audiences. They focus on topics of local concern, social justice or human experience presented from diverse perspectives. On an evening out, spectators typically attend a number of the 15-minute performances.

Microteatro’s uniqueness is based in three structural elements: performances are all centered on the same theme, which rotates monthly; they take place in one space and they address challenging topics in ways that are approachable and non-threatening to promote critical reflection.

Bulman believes this short form of theater is appealing because people enjoy gathering together and socializing for a relaxing night out and they value live theater. However, as people’s attention spans become shorter, they recognize that the traditional two-hour theatrical performance doesn’t permit much time for socializing or for discussion. In contrast, Microteatro’s tight performance quarters provide interactions that are up close and personal and the central social space fosters dialogue and opportunities for discussion and reflection on the performances’ themes and impact.

“Each 15-minute play is a complete artistic event,” Bulman says. “You’re in the middle of it; there’s no hiding and it’s lively and intense. It’s a dynamic situation where spectators come in, get up and move from space to space, from performance to performance, so it’s very high energy. The level of intimacy and the level of positive discomfort that can come from these performances makes you acutely aware of the themes and their social impacts. The comfortable, entertainment-oriented pre- and post-performance settings help attendees critically reflect upon, discuss and move toward action on important community matters.”

Aside from the shows offering citizens a way to explore various perspectives of different social issues, they importantly also provide an ongoing income stream for members of the artistic community, Bulman says. Microteatro programming means regular work for the playwrights, actors, producers, stagehands and restaurant and entertainment support workers behind each run of performances. 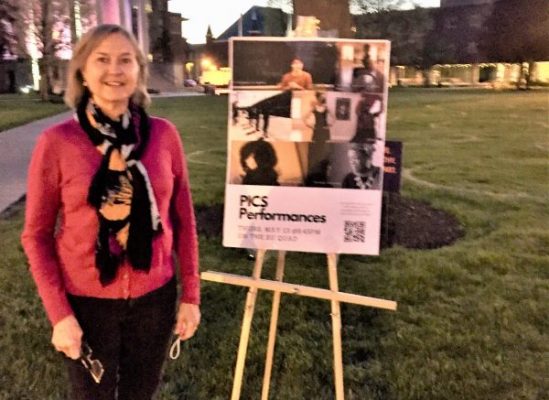 Gail Bulman’s interest in the theater form Microteatro began with her CUSE Grant and hosting of “PICS” (Performing Identities Across Cultures) performances.

Bulman’s interest in the budding Microteatro concept goes back several years. She says that while many other Latin American and world theater scholars have published findings on the artistic and social relevance, performance techniques, impact and spectator engagement of traditional full-length theater, no one has yet analyzed the artistic, social and economic infrastructure and impact of the burgeoning Microteatro movement. The form’s capacity to reflect and inspire action on social injustices remains underexamined as well, she says.

That’s the area of inquiry Bulman will address. She plans to immerse in the many Microteatro configurations underway in the three countries and speak to as many of those involved as she can to assess their artistic, community, cultural and economic impact. She intends to look at the form for its significance as a global arts model, its delivery format as a means of strengthening local community connections and communication and its viability as an economic engine for the arts and theater professions. She also wants to examine how the artistic collaboration works alongside independent and state-run theaters that produce full-length theater. Following her Fulbright research semester, she plans to write a book on her findings. Her previous books include “Staging Words, Performing Worlds: Intertextuality and Nation in Contemporary Latin American Theater” and “Feeling the Gaze: Image and Affect in Contemporary Argentine and Chilean Performance.”

College of Arts and Sciences Interim Dean Lois Agnew says Bulman’s Fulbright award is richly deserved. “This is a wonderful example of the type of innovative and relevant research that Professor Bulman, like many other Arts and Sciences faculty, undertake globally in order to bring fresh developments and approaches back to campus for the benefit of our students.”

Bulman is also scheduling campus events this fall to connect her scholarship to her students and to the University community. She has invited Microteatro’s founder, Miguel Alcantud, to campus from Madrid to conduct student workshops on developing and presenting microtheater performances. Alcantud will give campus presentations on Oct. 24 and 25.

Her initial research into the topic began as a CUSE grant funded for three years for the Language Matters Research Initiative. “PICS – Performing Identities Across Cultures” is one of five research strands in Language Matters. In 2020, she worked with students to develop scripts for a theater festival. In 2021, students created videos of their scripted presentations. This past spring, Bulman hosted a series of eight live performances on the Shaw Quad and 11 video student and faculty performances in collaboration with other regional colleges.