From its botanical properties to its existence as a global trading commodity, its role in international relations and the culture surrounding its consumption, tea has brought people together from around the world for various reasons for centuries.

An academic gathering to discuss all things tea from a range of research perspectives and practice viewpoints did the same recently as people from all walks of life and from 50 countries attended a virtual conference co-organized by College of Arts and Sciences Associate Professor Romita Ray. She coordinated “Tea: Nature, Culture, Society, 1650-1850,” with Professor Richard Coulton, of Queen Mary University of London, and Professor Jordan Goodman, of University College London, in collaboration with Isabelle Charmantier and Padmaparna Ghosh at London’s  Linnean Society. For three days in June, presenters from academia, agriculture, industry and museums addressed the natural, cultural and social histories of tea between the mid-17th and mid-19th centuries.

Ray is a professor of art history who hails from a family of tea planters in India. The idea for an all-encompassing conference on tea emerged in 2018 when she undertook a Caird Short-Term Research Fellowship at the Royal Museums Greenwich to examine the maritime history of tea trade between China and India. After her introduction to Professors Coulton and Goodman, ideas about hosting a gathering to discuss the significance of tea worldwide in all its facets began to swirl in many directions.

“All of a sudden, like a tea bush, my own research arm was growing these different tentacles and I pulled them back into the tea conference,” Ray says. “It has been a real pleasure co-organizing the conference because of the widening circle of tea itself and being able to see it through different yet overlapping lenses.”

The conference enabled Ray to present some of her research about wildlife on tea plantations. She was awarded a Syracuse University Collaboration for Unprecedented Success and Excellence (CUSE) Grant in 2020 and is writing a book on the art, aesthetics and science of tea in colonial and modern India. 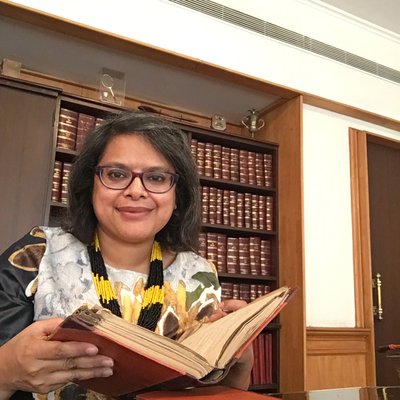 Other presenters spoke about tea through the prisms of natural history, scientific inquiry, trade and consumption, technology and innovation, material culture, maritime travel, and revolution and war. The combination provided new contexts about tea for people from diverse academic disciplines and created connections for those who had both “the lived knowledge of tea planting as well as the academic knowledge of tea,” Ray says.

While many may not realize it, tea’s rise to pre-eminence as perhaps the first modern globalized commodity resulted from more than just the commercial efforts of tea merchants, according to the professor. That also occurred because an extensive cultural framework of knowledge and practice existed around tea production, trading and consumption generated by people in China, Britain, Europe and India. As she notes, “Tea has been a very contested product. It has instigated multiple human stories because of human ambition or desire—and that story is enormous.”

The conference was financially supported by the Linnean Society of London, the world’s oldest society devoted to the history of science, as well as Syracuse University, Oak Spring Garden Foundation and Syracuse University alumnus Todd B. Rubin ’04, who heads the company The Republic of Tea.

It had been postponed for two years due to COVID when the organizers decided to move the conference online. That expanded the scope of the audience and the ability to add different types of presentations. As a result, a unique aspect was that curators of tea-related items from nine institutions in India, Taiwan, the United States and the United Kingdom could visually showcase their collections to interested viewers throughout the world.

Consequently, videos about botany, porcelain and garden histories, and global trade and shipping were interspersed with informational presentations. The range of topics generated new ways of thinking about the material histories of tea, Ray says. Panel presentations with curators, tea planters and the chairperson of the Tea Research Association of India concluded each day’s proceedings.

Two Syracuse University alumni involved in the conference offered appreciation for what it achieved.

Alumnus Rubin says he is thrilled to have supported the event because continuing education and giving back are among his personal core values. “Tea is steeped in rich history and has limitless impacts on so many different cultures,” Rubin says. “I am proud that so many individuals worldwide had the opportuniTEA for learning about the history and culture of tea.”

Margot Finn ’80, a biology major while at Syracuse who is now one of the world’s leading historians on British history and a faculty member at University College London, agrees. “The conference showcased all that is best in 21st-century academic research collaboration, seamlessly weaving together new perspectives from history, literary studies and material culture on the one hand, with museology, scientific research and agrarian practice on the other. The happy product of this collaborative project was a cornucopia, not a cacophony. Illuminating new ways of thinking about the multiple worlds tea both inhabited and shapes will inform research and teaching around the world for the next decade.”

“The conference provided a wonderful opportunity to explore tea through many different perspectives,” Ray says. “It was a tremendous learning experience, not just about the multifaceted plant product we know as tea, but equally so about how to bring people together from academia, museums, archives, tea research institutes, the tea industry and the wider public in a series of interdisciplinary conversations about a well-known leafy commodity. And it was especially exciting to bring alive the histories of a plant commodity that has long preoccupied scientists.”

The professor says she is grateful to the CUSE Grant Program, Rubin and Rosalie Stevens, of the S.I. Newhouse School of Public Communications (who close-captioned the videos) for their support of the event. The Linnean Society is airing conference presentations on its YouTube channel.

Now, Ray hopes that her extensive research, her connections to tea interests throughout the world and her forthcoming book help create an understanding that tea is so much more than just a tasty, popular beverage, she says. “The history of tea is not separate from us; it’s a history that continues to this day. It sits in your cup of tea every day.”