Sasha Valitutti, a junior aerospace engineering major in the College of Engineering and Computer Science, has been named a recipient of a Science, Mathematics and Research for Transformation (SMART) Scholarship from the U.S. Department of Defense (DoD). 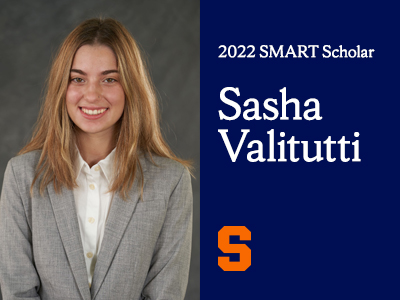 The award will fully fund her tuition for her remaining years of college; provide her with an annual stipend of $25,000; provide mentorship through a DoD sponsoring facility; guarantee summer internships at a DoD-connected institution every year she is an undergraduate; and guarantee her employment placement within the DoD or at a DoD-connected institution after graduation. She will work for the DoD for one year after graduation as part of the conditions of the award.

Valitutti says that when she began her studies as an aerospace engineering major, she knew very little about emerging aerospace technologies, and even less about how they intersect with sustainable solutions to engineering problems.

“I had this preconceived notion that all the most cost-effective, environmentally friendly ways to fly planes and launch rockets had already been invented,” she says. “It wasn’t until I took courses such as thermodynamics, mechanical/aerospace laboratory and computational fluid dynamics that I was challenged to think about improving existing designs as I learned the course material.”

Valitutti has worked in the Skytop Turbulence Lab with Mark Glauser, professor of mechanical and aerospace engineering. The lab aims to understand the flow of a rectangular jet nozzle, and manipulate the flow, for a more desirable product.

“I have learned how to set up the fuel tanks and air compressors needed for running the tests, as well as use a computer program to capture data from high-speed cameras and render the images for analysis,” she says. “In the future, I look forward to contributing to design ideas on modifying the jet’s splitter plate—a component of interest—as I run more tests and continue to be mentored by senior researchers. Learning how to operate the equipment has confirmed my passion for testing—a pathway that earning a SMART scholarship will allow me to follow.”

Valitutti gives much credit to those she has learned from. “I’m extremely grateful to have had professors such as Dr. (Jeongmin) Ahn, Dr. Glauser and Dr. (Mehmet) Sarimurat,” she says. “They have inspired me to change my way of thinking—that the ‘best’ solution to sustainable and affordable air travel or space travel has not been invented yet, and if I set my mind to it, I can be a small contributor toward that solution.”

Upon graduation in May 2023, Valitutti will be assigned to the 461st Flight Test Squadron (FLTS) assigned to the 412th Test Wing of the Air Force Test Center (AFTC) at Edwards Air Force Base in California. The AFTC is the hub of research, testing, development and deployment of aerospace systems for the U.S. Air Force. “I feel really lucky to be placed at the center of all this innovation. I will be joining the Test Operations division, where I will help test aircraft. Currently, the 461st FLTS is working on testing the Lockheed Martin F-35 Lightning II, so I’m excited to be involved in that when I join,” she says.

“Their trust in the United States granted us better living conditions and the chance for me to have educational opportunities that would not have been available in our home country. I feel an immense sense of gratitude and patriotism for the nation that has changed the course of my life,” she says. “For these reasons, I believe the Department of Defense is the ideal place for me. At the DoD, I can apply my aerospace engineering skills in a way that contributes to the safety of Americans and give back to the country that has offered so much to me and my family.”

In addition to her faculty mentors, Sasha worked closely with the Center for Fellowship and Scholarship Advising (CFSA) to apply for the SMART Scholarship. “Sasha’s desire to use her aerospace engineering education as a public servant is really inspiring and makes her an ideal candidate for the SMART Scholarship,” says Melissa Welshans, assistant director of CFSA. “We know that Sasha will have an outstanding career making innovations that benefit society.”

CFSA will hold a session on DoD-related scholarships and research opportunities, including SMART, with alumnus Steve Farr G’93 on Friday, April 29, at 10:30 a.m. in 331 Link Hall.