After 35 Years at Food Services, Co-Director Sue Bracy Steps Away 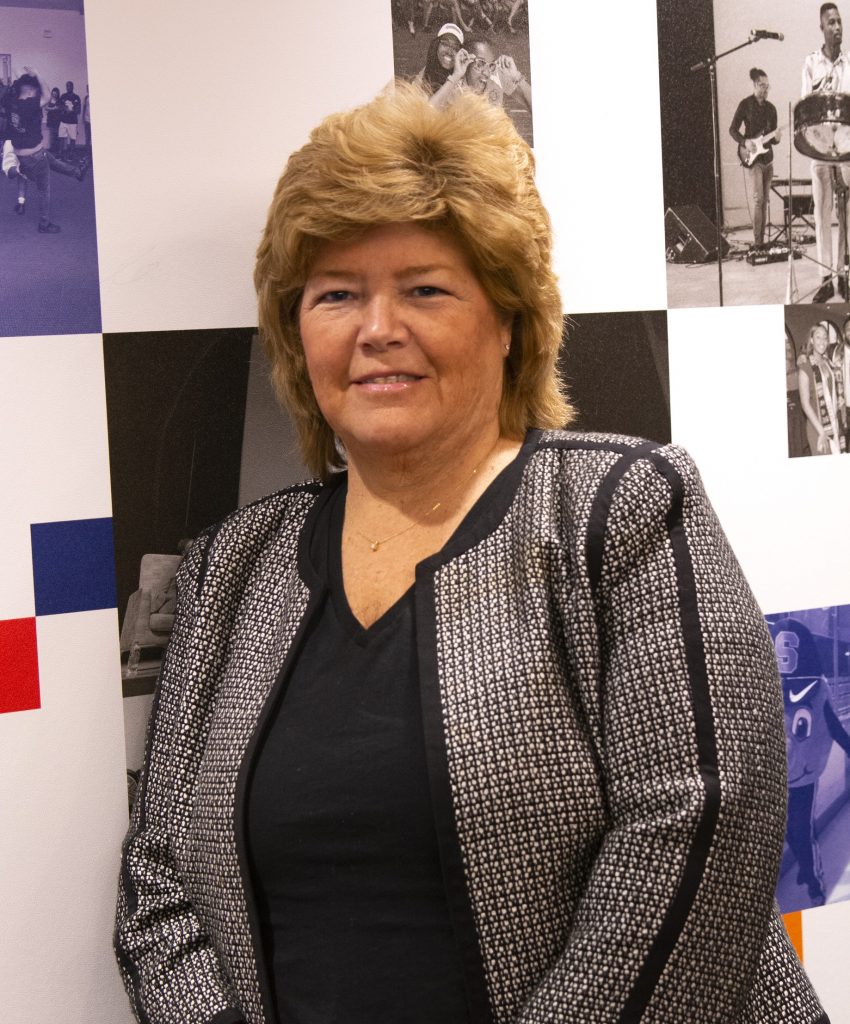 In many ways, Sue Bracy’s career growth at Syracuse University Food Services parallels the growth of the department.

When she began her career at Syracuse University in August 1987, the department’s retail footprint was miniscule: only three cafes. She was hired to supervise the three cafes, never envisioning how large the department would grow.

Over the next three decades, her career would take her from those cafes, to vending, then to Kimmel Food Court, the Goldstein Alumni and Faculty Center Restaurant, Catering Services, Goldstein Student Center and, finally, to leading the opening of the sparkling new food court at the renovated Schine Student Center.

“You can’t spell Syracuse without S-U-E,” says Jon Webster, executive director of hospitality. “Her fingerprints are all over our department and the University in an extremely positive, selfless way.”

Bracy’s Syracuse University roots run deep. Her mom worked at the Carrier Dome for 25 years as the administrative assistant for then-director Pat Campbell. Her sister worked at Hendrick’s Chapel. Her family has had season tickets for over 35 years and she’s a proud alumna herself.

Bracy graduated from the University in May 1986 with a major in child development and a minor in psychology. While she acknowledges that a degree in child development doesn’t typically lead to a career in food service, Bracy had worked at McDonald’s throughout her time in college and had actually earned 12 college credits through Hamburger University, the company’s Chicago-based training program.

Once she started her career at Syracuse, her hard work and obvious leadership skills meant that she steadily gained more responsibility. Bracy was promoted several times, and eventually took on the role of co-director of Food Services in 2016.

“I’m often awestruck as to how Sue managed balancing a genuine concern for employees while maintaining the many policies and guidelines of the University and adhering to the rules of our union contract,” says Michelle Schieder, the campus’s SEIU co-chief steward of the food service division, who worked alongside Bracy for most of her career. “She wore many hats and wore them well. She managed a piece in catering, the Dome, retail sales, dining centers and negotiations.”

Dealing with the pandemic

There were ups and downs over her 35 years. The fun came in catering special events and designing themed events and special parties for alumni. Stress was there too, especially managing the Food Services department through a global pandemic. She and her team worked nearly non-stop when Schine Dining reopened in spring 2021, in the middle of the COVID-19 pandemic.

Her co-director at the time, Mark Tewksbury, will always remember the care she showed for Food Services staff members at the uncertain outset of the pandemic. Her employees were all designated essential workers who needed to be on campus every day.

“I’ll never forget the long hours as we navigated the start of the pandemic,” Tewksbury said. “Sue’s concern for the safety of our team while maintaining service to students who remained on campus was immeasurable.”

“We had no written procedures for how to do that,” Bracy says. “It was just a lot of creative maneuvering. COVID was a constant learning experience, one where people stepped way out of their job descriptions just to get the job done.”

It is those memories that will stay with her, she says. How hard the members of the Food Services department work. How much they care about the University and the people here.

“There are some long-time employees here that are just great,” she says. “These are the people who are the backbone of Food Services.”

Among her employees, Bracy’s guidance and her willingness to lead are what they will treasure about her time at Syracuse.

“Under Sue’s direction, I was able to maximize my skills, because she constantly encouraged me to try new things,” says Keone Weigl, Food Services’ marketing manager. “Her management style gave me the confidence to become the best version of myself and a better employee for Syracuse University. I feel extremely fortunate to have had the chance to work with Sue.”

“Sue has always been tireless in her pursuit of making everyone around her know that she is in it right along with us,” says Catherine Brozaitis, supervisor of Schine Dining. “Sue has been such a strong and positive influence on so many, and most consider her their mentor. Sue has garnered respect by the example she has set for all of us.”

Though her official last day at the University was at the end of February, she hasn’t left campus forever: she’s agreed to stay on as a temp to help the understaffed department recruit, hire and train new employees.

Stepping away from the hectic day-to-day operations of the department has meant that she’s able to spend more time with her family, especially her elderly father. Her influence will live on in the Food Services department, including with its new leader, Webster.

“I wanted to be a part of charting the future course of Syracuse University Food Services with her,” says Webster. “I cannot imagine being successful in this position without her guidance and counsel, and I wish her well as she moves to the next chapter of her life.”