Preserving Aquatic Ecosystems, One Lake at a Time

Svetoslava Todorova is passionate about her work with aquatic ecosystems. For years, she’s been bringing small groups of her Syracuse University students to Green Lakes State Park, equipped with gear to measure the make-up of the lake and armed with their natural curiosity about the environment. Despite not knowing how to swim herself, she encourages her students to get as hands-on as possible, telling them not to fear the water.

“I’ve always been concerned about the environment and pollution. I realized that water—being one of the most essential resources—would be the most important one to take care of,” Todorova says. 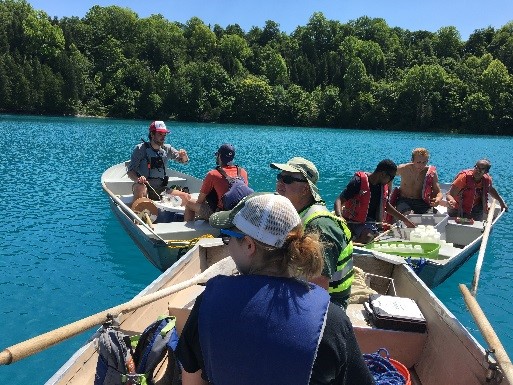 Taking care of water systems and finding ways to fight mercury contamination has become the life work of Todorova. As a professor of practice in the civil and environmental engineering department in the College of Engineering and Computer Science, she is most proud of her theoretical and experimental work mitigating mercury contamination in lake sediment.

“Mercury is everywhere. It’s in the Earth’s crust, and that’s why it’s found in air, it’s found in water, it’s found in soil. However, when it exceeds certain levels, or there are conditions that are conducive to the transfer of mercury to its organic form, that’s when we have a concern about mercury contamination,” Todorova says.

Mercury is very easy to ingest, but harder to get out of the body. Especially methyl mercury, which is a very poisonous form of the element. Being at the top of the food chain, humans are usually exposed to mercury through fish and meat consumption.

Through her research, she discovered aquatic mercury contamination can be mitigated by utilizing nitrate environments, which decreases aquatic life’s exposure to mercury. She even played a key role in the development of the Minamata Convention on Mercury, an international agreement that addresses human activity that leads to widespread mercury contamination.

“The big issue is the transfer of mercury from soil or its aquatic ecosystems into the food web,” Todorova says. “This is how it’s exposed to humans and wildlife.”

Calling her work a drop in the big ocean, Professor Todorova hopes her research contributes to the overall global mission to protect and improve aquatic systems.

“I don’t think I’m doing anything great, but I’m contributing to the whole knowledge that we all need to be able to take care of the Earth,” Todorova says.