Bea González to Be Formally Installed as University Mace Bearer

Bethaida “Bea” González, former vice president for community engagement, special assistant to the chancellor and dean of University College, will be formally installed as Syracuse University’s mace bearer at the One University Awards ceremony on Friday, April 22, at 4 p.m. in Hendricks Chapel. 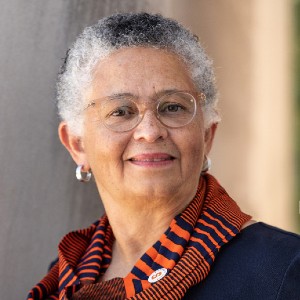 Chancellor Kent Syverud appointed González as the University mace bearer in May 2021. She succeeded John Palmer, University Professor and dean emeritus of the Maxwell School of Citizenship and Public Affairs, in the role and led the 2021 Commencement ceremonial processions.

“I was surprised, touched and honored to be asked by the Chancellor to become the next mace bearer,” González said in a story announcing her appointment last May. She served the University in multiple capacities for more than three decades before her retirement in May 2020. She currently serves as an advisor to the University’s Community Review Board.

“When you’ve been at one place for so long, you want to keep trying new things,” González says. “I guess it was on my bucket list. And then the call came from the Chancellor. It’s really a recognition of all the work we’ve done together to uphold the mission of this University and to make it even more inclusive, just as our founders envisioned.”

The tradition of the charter mace at Syracuse University began in June 1949, with University Registrar Keith Kennedy leading graduates into Archbold Stadium for Commencement with a mace carved of wood. It was replaced in 1959 by the current mace, 3½ feet in length made of sterling silver with inlaid carnelian and lapis lazuli stones, a gift from former Trustee and mace bearer Gordon Hoople G’49.

Throughout the years, Syracuse University mace bearers have been professors, deans, administrators and a chair of the Board of Trustees, leading academic processions at major University ceremonies—most notably the New Student Convocation in August, Winter Convocation in January and Commencement in May.