Chancellor Kent Syverud has appointed Bethaida “Bea” González, former vice president for community engagement, special assistant to the chancellor and dean of University College, as the next Syracuse University mace bearer. González succeeds John Palmer, University Professor and dean emeritus of the Maxwell School of Citizenship and Public Affairs, who had served as mace bearer since 2018.

When González, a longtime member of the Syracuse University community, puts on the white gloves, dons the orange robe and takes hold of the charter mace for the 2021 Commencement ceremonial processions, she will be acutely aware that she is upholding a sacred tradition. 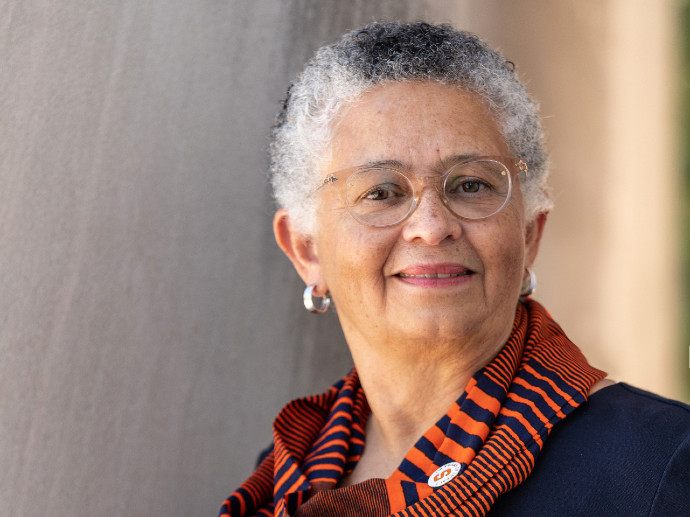 “I was surprised, touched and honored to be asked by the Chancellor to become the next mace bearer,” says González, who served the University in multiple capacities for more than three decades before her official retirement last year. She recalls touching the silver and jeweled mace and wondering  in years past if she would ever have the honor of bearing it officially.

“When you’ve been at one place for so long, you want to keep trying new things,” Gonzalez says. “I guess it was on my bucket list. And then the call came from the Chancellor. It’s really a recognition of all the work we’ve done together to uphold the mission of this University and to make it even more inclusive, just as our founders envisioned.”

“Bea is the living symbol of everything the charter mace stands for,” says Chancellor Syverud. “She epitomizes our core values of academic excellence and student engagement. She is a highly respected leader and mentor who has inspired countless students to dream and achieve big. She has also been instrumental in deepening connections and forging new ties between the University and the greater Syracuse community.”

The tradition of the charter mace at Syracuse University began in June 1949, with University Registrar Keith Kennedy leading graduates into Archbold Stadium for Commencement with a mace carved of wood. It was replaced in 1959 by the current mace, 3½ feet in length made of sterling silver with inlaid carnelian and lapis lazuli stones, a gift from former trustee and mace bearer Gordon Hoople G’49.

Atop the mace appears a campfire, symbolizing the University’s role to provide the light of knowledge and paying respect to the historic role played by the Onondaga Nation in Central New York. Known as the Firekeepers of the Haudenosaunee Confederacy, the Onondaga people were the first in the region to pursue the path of enlightenment through peace and democracy more than 600 years ago.

González says that when she studied the history of the mace bearer and the design of the current mace, she connected most with its tribute to leadership: to aim high, to bring others along on the journey to achieve goals, to work collaboratively and communally for the greater good, to provide access and opportunity that allows others to achieve their dreams.

“When I walk with the charter mace in my hands, I’m going to be looking around at the audience, the people gathered there, and celebrating the work that Syracuse University does to ensure that its students are successful and the amazing people that work here,” says González. Though the honor is a most serious one, she laughs over being anxious about tripping (she’s picking her shoes carefully) and doing more weight-bearing exercises to make sure she has the strength to hold the mace steady.

Throughout the years, Syracuse University mace bearers have been professors, deans, administrators and a chair of the Board of Trustees, leading academic processions at major University ceremonies—most notably the New Student Convocation in August, the Winter Convocation in January and Commencement in May.

The selection of González for this esteemed honor pushes the tradition forward and expands it, as she sees it. González, who describes herself as “a product of all of the War on Poverty programs” after moving from Puerto Rico to Syracuse as a young child, eventually came to Syracuse University as an academic counselor at University College. She rose through the ranks to become dean of the college, then vice president for community engagement, and is also broadly recognized as a public servant and civic leader.

“I’ve always pushed the boundaries when I could,” says González. “I was often out there on my own, pretty fearless, disrupting the status quo in service of a greater good. Being honored as the Mace Bearer is an acknowledgement that tradition and disruption can coexist, pushing us forward to a better place.”