Mike Tirico ’88 has seen and called it all during a decorated and award-winning sports broadcasting career that started at WAER on the Syracuse University campus and has taken him around the world as one of the most versatile and well-respected voices in sports. 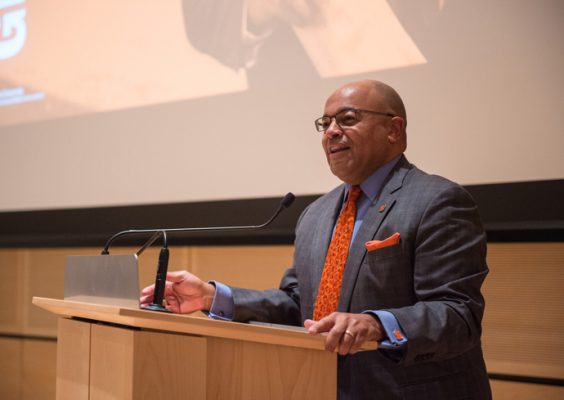 Tirico will transition from his current duties hosting NBC’s “Football Night in America,” the pre-game show that leads up to “Sunday Night Football,” and make his return to the broadcast booth.

“This is the type of assignment that allows an opportunity to reflect on those who have supported and influenced you along the way. For me, that starts at Syracuse with undergraduate experience at Newhouse and Maxwell, along with working at WAER-FM and then WTVH-TV5. I am eternally grateful to the many supportive friends on campus and around Central New York who for decades have always treated me as one of their own,” says Tirico, the 2010 Sportscaster of the Year by the National Sportscasters and Sportswriters Association (NSSA).

“Cris is a University of Florida alumnus and Melissa a University of Virginia alumna, so I guess our team colors will be Orange and Blue…but we know which shade is the best version of that combo!” says Tirico, who earned a broadcast journalism degree from the S.I. Newhouse School of Public Communications and a political science degree from the Maxwell School of Citizenship and Public Affairs.

“When Mike joined NBC Sports in 2016, it was our plan for him to become our primetime Olympics host and the play-by-play voice of Sunday Night Football. We are excited to have Mike join Cris Collinsworth full-time in the booth this season,” said NBC Sports Chairman Pete Bevacqua in a statement to Deadline.com.

Tirico, Collinsworth and Stark will work their first game together in the revamped NBC Sports broadcast booth for the Pro Football Hall of Fame Game on Thursday, Aug. 4, on NBC and Peacock. They will also call the Sept. 8 NFL Kickoff Game on NBC and Peacock.

Tirico also served as the voice of ESPN’s “Monday Night Football” from 2006-2015 and has called primetime NFL games for last 15 years. All told, Tirico has 26 years of experience as an NFL primetime studio host or play-by-play voice, and has called more than 200 NFL games.

This past year, as NBC Sports’ studio host, Tirico anchored the network’s primetime coverage of the Summer and Winter Olympics, “Football Night in America,” the Super Bowl LVI Pregame Show, the Triple Crown of horse racing, golf’s U.S. Open and the Indianapolis 500.

Tirico was also sports director at WTVH-TV in Syracuse from 1987-91 and handled play-by-play duties for Syracuse University basketball, football, lacrosse and volleyball.

Tirico got his start in sports broadcasting while a student at Syracuse, serving as assistant sports director at WAER. In 2014, Tirico was inducted into WAER’s Hall of Fame.

A passionate supporter of Syracuse University and avid Orange ambassador, in 2005, Tirico received the George Arents Award, Syracuse University’s highest alumni honor, presented annually to alumni who have made outstanding contributions to their chosen fields. He has worked with the Newhouse Advisory Board, the Sport Management Advisory Council and the Athletics Advisory Board.

To show appreciation and celebrate its faculty and staff, Syracuse University is offering a chance to win two game tickets and complimentary transportation to cheer on the Syracuse football team in the Bad Boy Mowers Pinstripe Bowl. The bowl game…