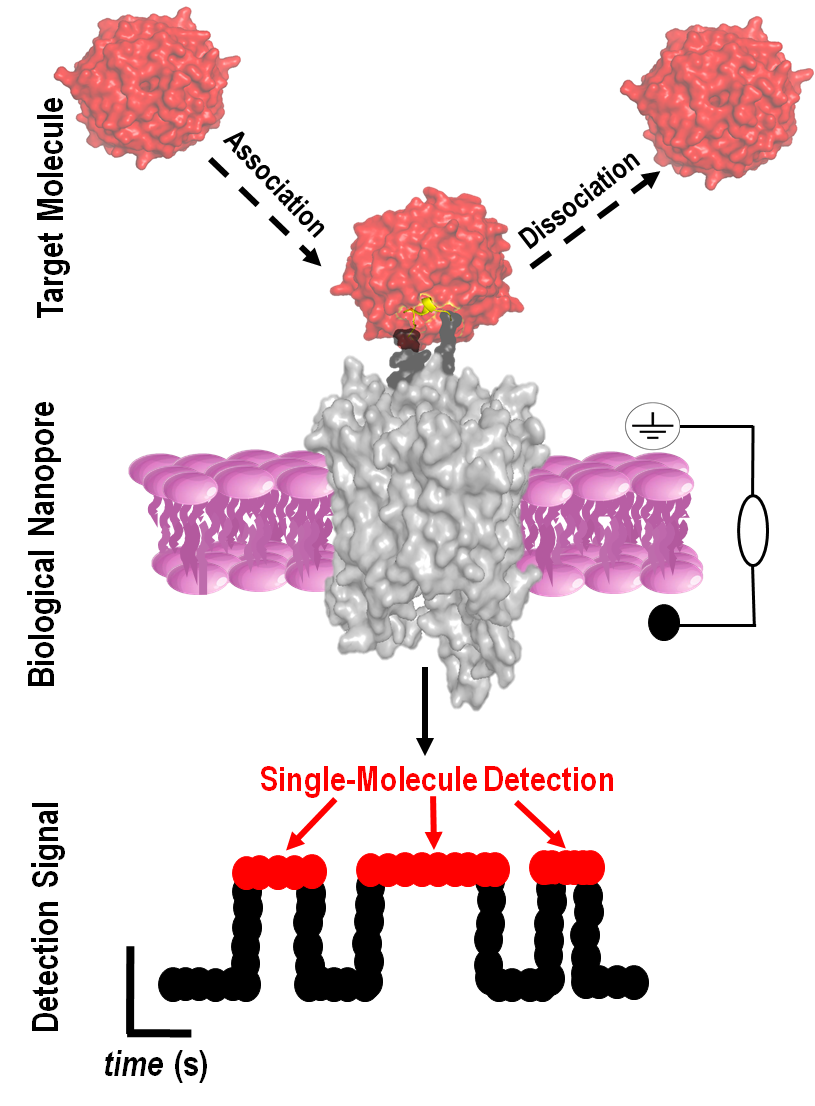 Cartoon of a biological nanopore-based sensor (gray), which detects WDR5 (red) one molecule at a time. The detection signal (bottom) shows a cartoon of what the raw sensor signal looks like. (Courtesy: Lauren Mayse)

The job of a protein hub inside the nucleus of a cell is similar to a chef in a kitchen. Both need to manage multiple tasks efficiently for a successful outcome. For the chef, if they spend too much time chopping vegetables and neglect the main course cooking on the stove, the result is a burnt dish. Similarly, if the protein hub spends too much time interacting with one protein and is not given a break to accomplish its other important tasks, it can lead to disease states such as cancer.

Researchers in the College of Arts and Sciences’ Department of Physics have been studying a protein hub, called WDR5, which is responsible for many important functions within the nucleus. WDR5 has recently been heavily investigated because it is a promising target for anti-cancer drugs. But until now, not much has been known about how WDR5 interacts transiently with other proteins inside the cell because the necessary technology to study WDR5 did not exist. Using a highly sensitive engineered biosensor, researchers have uncovered new information on how WDR5 connects and disconnects with other molecules.

The goal of the team’s study was to create an ultra-sensitive device capable of detecting and quantifying WDR5. They designed, developed and validated a nanopore-based biosensor, which creates a tiny hole (nanopore) in a synthetic membrane and can identify proteins in solution at single-molecule precision.

The biosensor’s channel-like base creates a small hole in the synthetic membrane and allows ionic solution to flow through it. When the sensor recognizes a specific molecule, in this case WDR5, the ionic flow changes. This change in flow serves as the signal from the sensor that the targeted protein has been found.

“The idea behind this concept was to design nanopores that are equipped with hooks that pull certain proteins from a solution,” says Movileanu, who is also a member of the BioInspired Institute. “By being able to fish them from a solution one at a time, we can better understand how these proteins function.”

A Tool for Detection

The team revealed new details about the conditions under which WDR5 starts and stops talking to other proteins, which is known as protein association and dissociation. This will allow researchers to better understand how these multitasking molecules carry out their various responsibilities.

“Proteins need to talk to each other for brief periods,” says Movileanu. “In the majority of cancers, you have a situation where at least one protein sits on another protein or talks to another protein for much longer than needed. Many biotechnology companies want to develop drugs that perturb those interactions.”

Mayse shares that their study uncovered new information about WDR5’s unique interface, where a peptide must wiggle into its deep and donut shaped cavity. Their discovery will help researchers develop more effective drugs to target WDR5. “We found that our sensor can recognize WDR5 with a weak connection, a medial connection and a strong connection to a peptide,” she says. “This shows that a potential drug must be able to prevent all three different ways a peptide can associate with WDR5.”

Biosensors like the one developed in Movileanu’s lab could one day lead to more accurate and efficient methods of scanning chemicals in the body, providing an opportunity for doctors to detect diseases much earlier than what is attainable today.

“In many diseases, there are markers, chemicals in our body that change quite a bit in a noticeable way when diseases, such as cancer, start to develop,” says Movileanu. “By integrating these sensors into nanofluidic devices that are scalable, we are not too far from being able to scan many markers from a sample of blood.”

Read the team’s full paper in the journal Nature Communications.