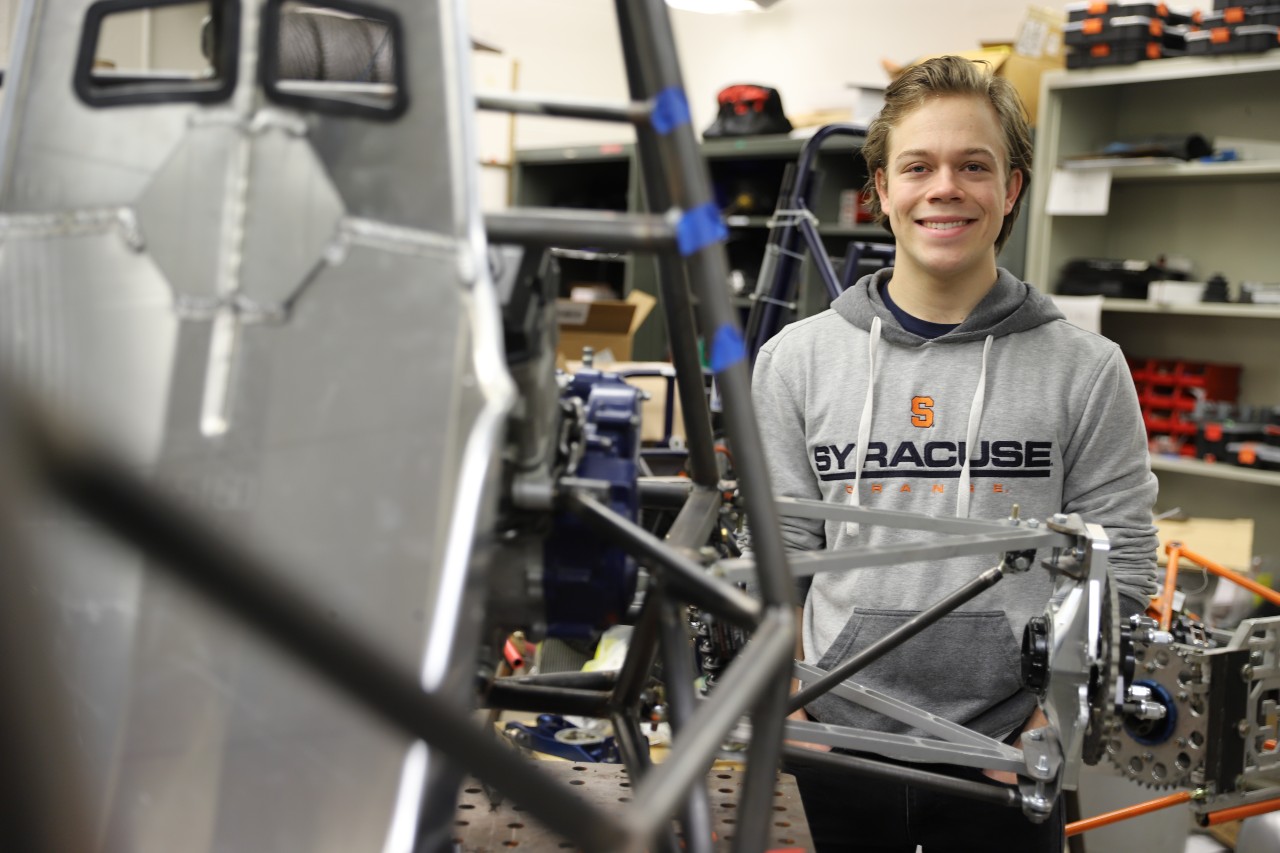 Long before he could drive them, Elliott Holdosh was always interested in cars. He got his first hands-on experience working with his grandfather on a 1989 Ford Mustang and it set his future in motion.

“When I was considering what I wanted to study in college, I thought—what could I do with cars?” says Holdosh.

When he arrived at the College of Engineering and Computer Science, Holdosh started making connections and joined the Citrus Racing Formula SAE team. It gave him more experience with automobile design and engineering.

“It helped me learn a lot about technology but also automobile engineering terminology,” Holdosh says.

While working with Citrus Racing, Holdosh saw a posting in the group’s Slack channel for a job opportunity in solid works and computer-aided design (CAD). It led to a part-time position with Auto Gear Equipment in Syracuse, which specializes in high-performance manual shift gearboxes for race cars.

“I was able to work as a drafting engineer,” says Holdosh. “I took two-dimensional sketches and brought them to 3D designs. It has been an incredible opportunity and meaningful professional experience with a great company.”

“Career advisor Christopher Maldonado helped me with a resume review and to improve my LinkedIn profile,” says Holdosh. “I knew a co-op could be a great opportunity for me.”

Holdosh applied for and was offered an internship with Tesla at their Fremont, California, facility as a vehicle engineering intern for the interiors engineering team.

“When I got the news, it was a very impactful moment,” Holdosh says.

He will be at Tesla for the Spring 2022 semester but was able to adapt his academic schedule so he will still be on track to graduate on time after four years at Syracuse University. He is grateful for the relationships he has built on and off-campus and believes those connections are what helped him land the position at Tesla.

“Get involved on campus and get to know people,” says Holdosh. “It was the catalyst.”

While his engineering journey began with his grandfather’s Mustang, Holdosh is excited to be part of the next generation of automobile design.

“I want to work for a company that is always pushing to improve,” says Holdosh. “We are going into an age where we need to prioritize our planet. Tesla is the best at that right now.”