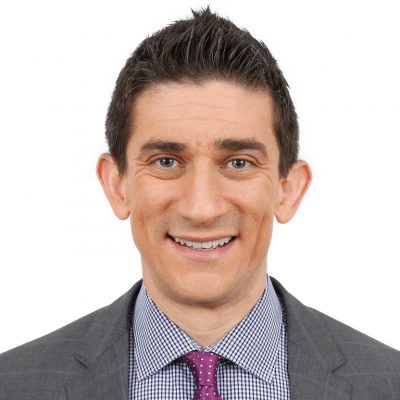 Andrew Siciliano ’96 doesn’t know how he got so lucky.

Eighteen years ago, Siciliano, an avid NFL fan, would watch that week’s top games with his Syracuse University buddies in one of their father’s basements, screaming at the television while cheering on his beloved Cleveland Browns.

Today, Siciliano is just as passionate about football, but instead of being glued to his television as a fan, he is bringing the highlights to millions of fans around the world as host of DIRECTV’s RedZone Channel.

Every Sunday is surreal for Siciliano, who earned a broadcast journalism degree from the S.I. Newhouse School of Public Communications. He freely admits he’s not quite sure how he got here, but he’s grateful to hold down a job he loves.

This week, Los Angeles is the scene for Super Bowl 56, which pits the Cincinnati Bengals against the Los Angeles Rams. The game has special significance for Siciliano, who has been the preseason television play-by-play voice of the Rams since 2011.

Siciliano can be seen every week on “NFL Now,” and “Thursday Night Football First Look,” as well as NFL Network’s on-location coverage of the Senior Bowl, the NFL Draft and training camps.

We recently sat down with Siciliano, who shares how Syracuse University and WAER impacted his broadcasting style, reveals the big break that launched his career and gives advice to sportscasters looking to follow in his footsteps.

LISTEN: Hear the full conversation with Siciliano on the ’Cuse Conversations podcast.