Catching Up With Quentin Brunson ’12, G’13 and Fiancée Ashleigh Mann, AKA ‘The Adele Couple’ 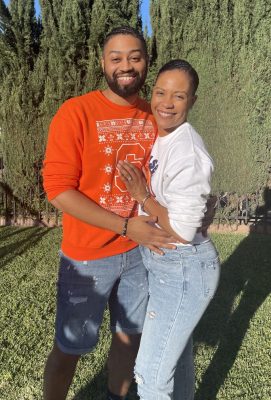 The whole world was watching this past November when Syracuse alumnus Quentin Brunson ’12, G’13 sprung a surprise proposal on his girlfriend of seven years, Ashleigh Mann, during singer-songwriter Adele’s “One Night Only” concert special on CBS.

After Brunson confirmed to Mann that the very public proposal was “in real life,” Adele appeared to serenade the couple with the Bob Dylan classic “Make You Feel My Love” while they took front-row seats among Lizzo, Melissa McCarthy, James Corden and other celebrities at the Griffith Observatory in Los Angeles on Oct. 24.

That Brunson set the bar high with his marriage proposal is perhaps the understatement of the century—but in speaking with the couple, you get the sense that they have nowhere to go but up. Heading into Valentine’s Day, with love and romance at top of mind, Syracuse University News caught up with Brunson and Mann to hear how wedding planning is going, what advice they have for someone who isn’t feeling the love this year and why they feel like they are going to “crush” marriage.

Wedding planning in the year 2022: Shared Instagram account? Check (@ashandqsayido). Wedding hashtag? Check (#BecomingBrunson). But has the date been set?

The pair has also selected a venue for the nuptials in their adopted home of Los Angeles. And, thanks to the exposure of the Adele special, they’ve had a dress designer reach out and offer to make the bride not one, but two custom gowns. “We’re so lucky for them to reach out,” Brunson says. “It’s crazy how just that moment [of us getting engaged on TV] has led to so many people coming reaching outside of themselves to be a blessing to us.”

Mann says her mother recently visited from Ohio and, in a whirlwind four days, they secured the venue, said “yes” to the dress(es) and did two cake tastings. The picture for their big day is definitely coming together.

With Brunson hailing from upstate New York and Mann from Ohio, they are excited to welcome and host their extended families on the west coast for their wedding weekend. “99% of our guests are flying in, and for many of them this will be their first time visiting California,” the couple says. “So it’s not just about us getting married—we want to really curate an experience for them and show them our home that we love.”

Due to lingering uncertainty about the coronavirus pandemic, they’re also planning a Zoom option so that loved ones can attend virtually, if they feel more comfortable.

Above all else, Mann and Brunson say they want their special day to be an extension and reflection of their identities, both as individuals and as a couple. “When people come from out of town, when they get here, when they walk in the door—I want it to feel like us,” Brunson says. 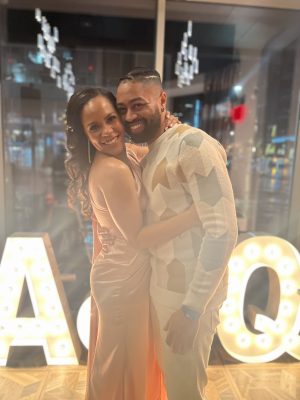 Mann and Brunson at their engagement party. (Photo courtesy of the couple)

Rolling in the Deep

The pair first met when Brunson was 23 years old (and a fresh graduate of the Falk College’s master of social work program) and Mann was 25. By the time they got engaged, they’d known each other for nearly a decade—and had journeyed together through the obstacles, growth and evolution that are often hallmarks of one’s 20s and early 30s. So how has their love for and commitment toward one another deepened over the years?

“Love to me is a choice,” Mann says. “You have to want to choose to go through all of it with someone. When that person is worth it, you don’t care how ugly it gets. It’s putting in the effort, the listening, the growing, the fighting.”

Brunson agrees. “I think we’re sold this image of love just being so easy, based on what we see in the media and the culture. But over time you realize that it’s not going to be easy, and you don’t want it to be easy. It’s something you work at—and it doesn’t always feel like work—but you keep at it because you know that with the work, you’ll keep getting better, stronger and more real.”

They both say their partnership has helped them grow personally and professionally in profound ways. Brunson moved from Syracuse to Los Angeles and worked as a social worker for a couple of years before focusing his energy on more creative pursuits in music and acting. Mann spent six years as a nanny before answering her calling as a plant-based chef and food influencer. They’ve both pushed one another to become better, more successful, more authentic and more aligned versions of themselves.

Brunson says, “I had and still have all these big dreams in my head, and so does she. We’ve had to have patience and trust, knowing that we had those qualities inside of us and stay confident that we were going to grow into the people we said we wanted to be together.”

“I always say that if I would’ve known that this was the man that I was going to get from that 23-year-old boy, I would’ve went after him even harder,” Mann says. “I knew he was going to be a great man, a great partner—he was incredible when I met him—but now he just blows me away.”

Not Feeling the Love This Year? 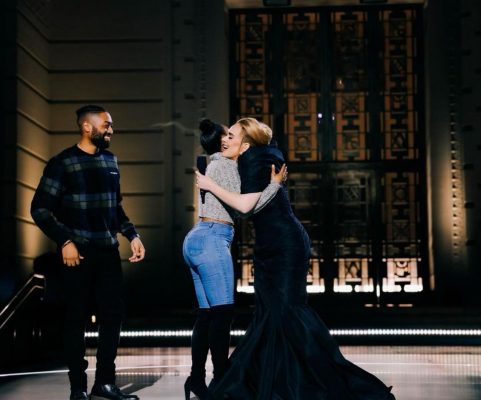 Brunson and Mann were engaged in front of a celebrity-studded audience during an Adele concert special filmed in Los Angeles in October. (Photo courtesy of the couple)

If you’re more in the “listening to Adele on repeat because I recently got my heart shattered” phase of life than the “planning the wedding of my dreams with my soulmate after getting engaged in front of Adele” phase of life, keep reading.

When asked what advice they would give to a young person (say, a student at Syracuse University) who has just had their heart broken, the couple says to try to keep the relationship in perspective and stay focused on the bigger picture of your life. “First of all, I would say that you still have to graduate,” Brunson says. “Because you don’t know where that Syracuse degree is going to take you in life, and maybe you aren’t going to want that person holding you back anyways.”

“I’ve been there, and I know it’s easy to feel like the world is over,” Mann adds, sympathetically. “But seriously, you’re not going to be the same person you are right now in a year. When you graduate, you’re going to go out in the world and do big things and make your mark. It sounds cliché, but time is everything, honestly. The pain is temporary.”

“Everything happens for a reason,” Brunson says. “If a breakup has you hurting bad, just know that you grow from hurt. In the midst of all that pain, believe that after you go through it, you are going to be so much better and ready for that person you’re really supposed to be with.”

For Brunson and Mann, they have no doubt that their prior relationships (and breakups) were leading them to something bigger, to each other.

“I think what’s most exciting is that we got ‘it’,” says Mann. “That special something, that once-in-a-lifetime, that ‘I know you’re my person’ feeling. And we’re ready to crush marriage. It’s like we’ve been in training and now we’re ready to be in the game … we’ve been on the bench and now we’re ready to play.” You can follow the couple’s wedding journey on their Instagram account, @ashandqsayido or—if you’re one of the few people on the planet who happened to miss it— watch their epic proposal on YouTube, courtesy of CBS.