He also knows that there might never have been a Quentin and Ashleigh were it not for a Syracuse University connection. 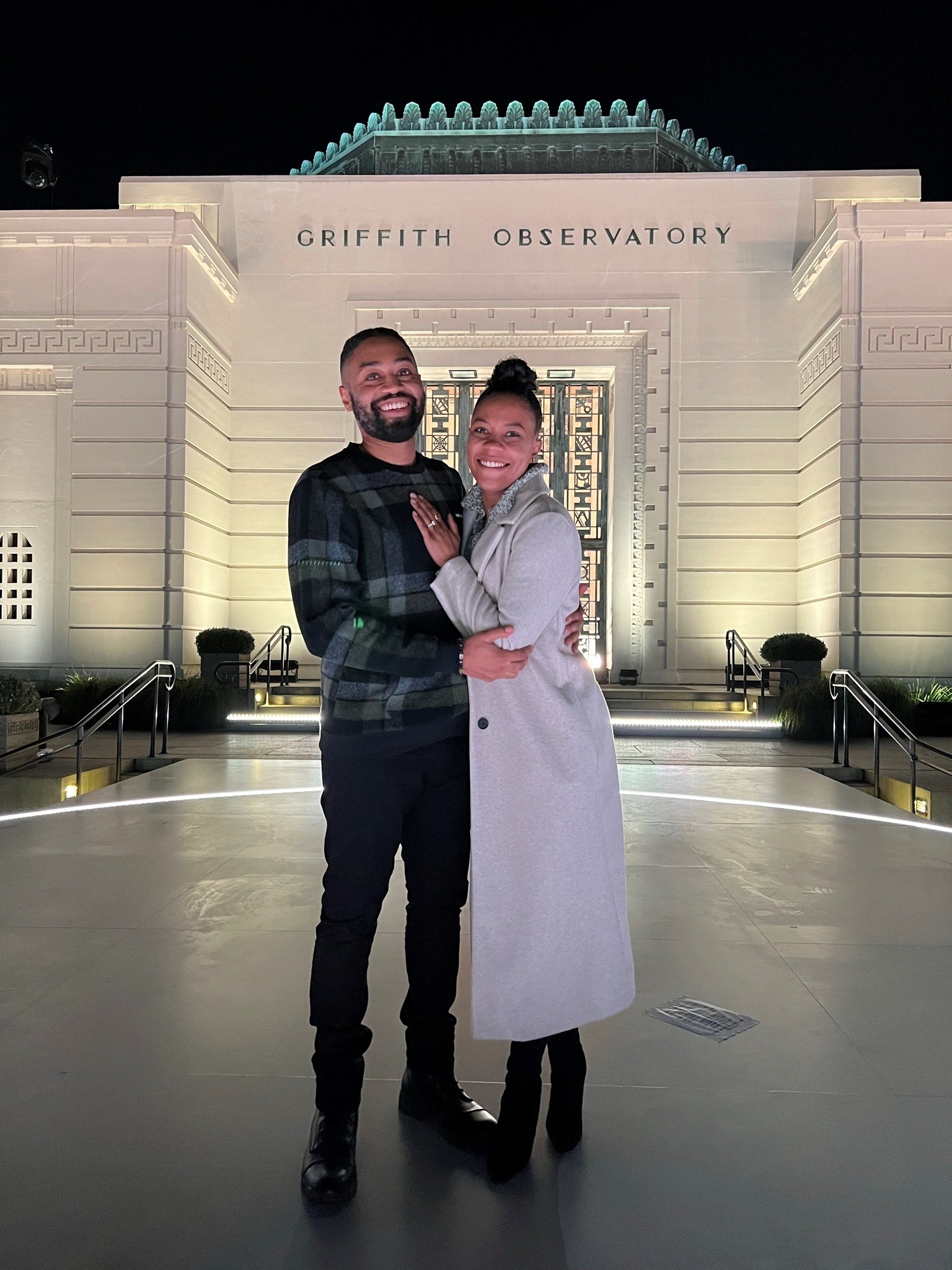 Brunson, who many call “Q,” is from Rochester. In 2008, he was a SummerStart student set on studying mechanical engineering. He soon switched to social work, earning both bachelor’s and master’s degrees from the Falk College of Sport and Human Dynamics. Right after graduation in 2013, Brunson’s Omega Psi Phi fraternity brother from Syracuse called him to tell him about a job opening at a high school in Los Angeles. Brunson flew out. He landed the job. And he also got introduced to that fraternity brother’s next-door neighbor—a girl named Ashleigh Mann.

“I instantly told him I had a crush on him. Like literally day one. I was like, ‘I promise you. You’re going to be my boyfriend,’” Mann recalls.

The two casually dated for two years before becoming an official couple. It took Brunson seven years after that to propose—something Mann isn’t shy to give him a hard time about.

Earlier this year, Brunson saw a post asking for a couple who wanted to get engaged in an “epic” way. It asked applicants to share how long they’d been dating, if she’d say yes, if he could keep a secret, who her favorite artists were and other questions. Singer-songwriter Adele was one of several artists Brunson listed. He submitted the one-minute video and waited. Soon after, producers were in touch, but were very hush-hush about the details of what would play out.

Brunson says he was able to keep everything from Mann by taking the calls after she went to work or while he was at work. Brunson’s work, it’s worth noting, is on the set of Nickelodeon’s “Side Hustle.” The show’s producers are all Syracuse graduates. He drives a car with Syracuse plates. He bleeds Orange.

Brunson and Mann say their phones have been “blowing up” since the television special aired with messages from Syracuse to South Africa.

What many people don’t know is that there was a part one of the epic night. Before escorting her blindfolded to Griffith Observatory, Brunson had taken Mann to a local park for a picnic with champagne. She thought that was the date. When they got back to the car, Brunson told her to put on the blindfold and trust him.

“We do weird stuff all the time,” Mann says. “It’s not out of the ordinary for us to do something strange. But, by all means, I did NOT think we were heading to see Adele. That’s for sure. Or get engaged, which I never thought he would do. I mean I’ve only been waiting my whole life.”

As for what took Brunson so long? “I knew it was her, but I didn’t know timing-wise what was going to happen. I was waiting for the right energy. People have been on my case for YEARS. When this post came up, I was like this ‘sounds like it’s for me’—and it ended up being for us!”

Producers kept telling him it would be something romantic and a once-in-a-lifetime opportunity. They didn’t clue him in on the Adele connection until a few weeks prior to the special, which was filmed in late October.

The celebrity-studded audience was a surprise for both Mann AND her man on one knee. Brunson did a walk-through that morning, but the producers didn’t tell him that Melissa McCarthy, Lizzo, Leonardo DiCaprio and Drake, among dozens of other A-listers, would be looking on.

The couple has a new Instagram account (@ashandqsayido) to document the wedding planning details as everything comes together. They’ll announce their date soon.

“We’re trying to get Adele to perform, Oprah to officiate and to have it in Drake’s backyard. If we can get that combination, we think it’s going to be great,” the couple laughs.

And since Mann grew up in Ohio and Brunson in Rochester, it’s not out of the question that future kids could choose Syracuse University one day. If you ask Brunson, it’s a no-brainer.

“Oh absolutely. I love this school and what it did for me and my life, my career, my everything.”