One of the most eminent image makers and social commentators in America, University Artist in Residence at Syracuse University Carrie Mae Weems returns to the Park Avenue Armory in New York City this fall with a major new commission and the largest, most significant exhibition of her multidisciplinary artistic practice in the last decade.

Throughout her career, Weems has produced a prolific and complex body of work, pushing the boundaries of photography and blurring the line between art and activism. Her new work, “The Shape of Things,” builds on the convening of the same name and accompanying public programming that Weems hosted at the Armory during her residency in 2017, using art as a lens to probe the political and social issues of the day. 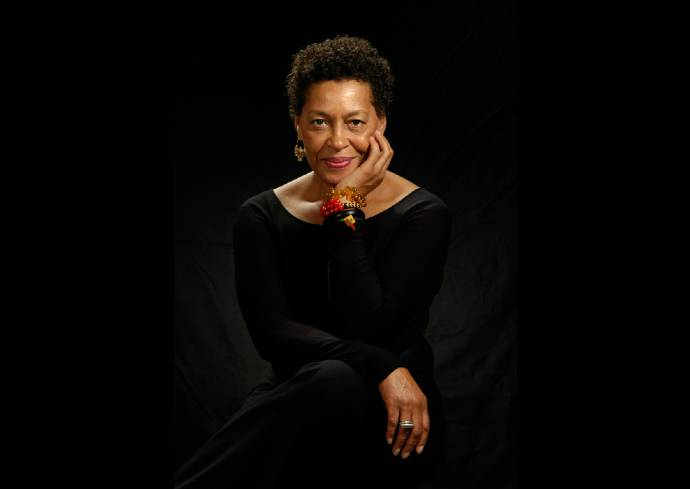 Carrie Mae Weems, University Artist in Residence at Syracuse University, will premier “The Shape of Things” Dec. 2 at the Park Avenue Armory in New York City.

Reflecting the “circus-like” quality of contemporary American political life, Weems conjures a dark setting in the Armory’s Wade Thompson Drill Hall with an exhibition that encompasses the breadth of her artistic output—including new multimedia installations and iconic works from the past decade, as well as a performance series and convening of artists. This timely project, which will be situated in the Drill Hall from Dec. 2-Dec. 31, was conceived as a platform for collective investigation and reflection on the complexity of the American experience.

“I am fascinated by 19th century media, so for the Drill Hall I created a cyclorama that contains a new film that pits the rise of the right along with its puppeteers, clowns, jokers and two-faced speakers and spies, charlatans and prophets of fake news, conspiracy theorists against the emerging forces of progress. In this world, ‘normal’ is turned on its head and all bets are off,” says Weems. “It is a time of murder, mayhem and mass protest and when covert operators of corruption bear their heads for all to see. My work centers on what happens when all facades are stripped away, and the people are left standing face to face with the realities of our time.”

Celebrated for her insightful photography, investigations of social dynamics, and ability to convene leading thinkers and artists through her work, Weems presents major new works alongside existing works that explore the circus of politics and, in Weems’ words, “the push for a just society, along with the starts and stops on the long slow road towards progress.” At the center of the exhibition is a new, large-scale video installation evoking a 19th-century cyclorama that offers new film material by Weems with original music by Jawwaad Taylor.

Other installation elements include a large-scale photographic installation; a memorial wall dedicated to victims of anti-Black violence; Lincoln, Lonnie, and Me (2012), a “Pepper’s Ghost” illusion with music by Jason Moran, the longtime curator for the Armory’s Artists Studio Series; and additional sculpture and installation works suggestive of a 19th-century side-show, including a peep show and dioramas. 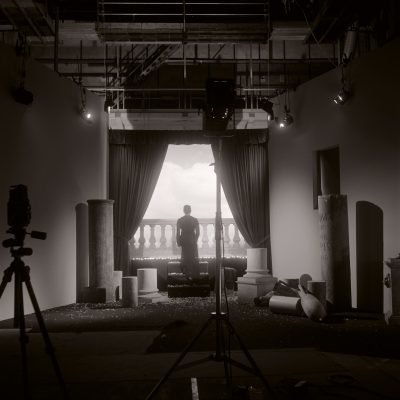 “Roaming-When and Where I Enter Ancient Rome” is one of the photographs that will be featured at “The Shape of Things” exhibition. (Photo courtesy of Carrie Mae Weems and Park Avenue Armory).

“Carrie Mae Weems has been a dynamic partner of Park Avenue Armory since her residency in 2017, which culminated in her convening (also called “The Shape of Things”) of fellow artists and cultural thinkers working at the intersection of art and social practice,” says Rebecca Robertson, Founding President and Executive Producer of Park Avenue Armory. “It is a full-circle moment to have her now take over the Drill Hall to bring such a significant body of work to fruition and extend her acute commentary on the social and cultural developments that have played out since her last major engagement here.”

“Park Avenue Armory has long sought to empower artists who, like Carrie Mae Weems, push and break the boundaries within their chosen milieu,” says the Armory’s Marina Kellen French Artistic Director Pierre Audi. “This major solo exhibition takes her practice another step forward as she makes full use of the expansive Drill Hall, in which she can realize her vision with no rules. Cultivating these kinds of long-lasting and evolving relationships with artists has been a cornerstone of the Armory’s work since its founding.”

Building on the convening and public programming developed as part of the 2017 collaboration between Weems and the Armory, “The Shape of Things” incorporates a weekend-long convening in a nod to what has become a trademark of Weems’ practice. This two-day gathering of performers, thinkers and activists, entitled “Land of Broken Dreams,” will explore what it is to be American in this time of turmoil and disruption through conversation, interventions and engagements throughout the exhibition and the building. Spanning two full days, the convening will feature a robust line up of discussions and performances. Additional details and a full schedule will be announced at a later date.

“The Shape of Things represents an insightful, thought-provoking reflection on recent social and political events, as seen through the lens of Weems’ distinctive vision and expansive, multidisciplinary approach,” says exhibition curator Tom Eccles. “By inviting the public to experience the work through media spanning video, performance and music, she embraces the concept of community as a path forward through these turbulent times. And by presenting a more holistic view of Weems’ expansive and incisive practice, ‘The Shape of Things’ will be a monumental display of her artistic prowess and keen powers of observation.”

Carrie Mae Weems (born 1953, Portland, Oregon) is widely renowned as one of the most influential contemporary American artists living today. Over the course of nearly four decades, Weems has developed a complex body of work employing text, fabric, audio, digital images, installation and video, but she is most celebrated as a photographer. Activism is central to Weems’ practice, which investigates race, family relationships, cultural identity, sexism, class, political systems and the consequences of power.

Over the last 30 years of her prolific career, Weems has been consistently ahead of her time and an ongoing presence in contemporary culture. Her work is organized into cohesive bodies that function like chapters in a perpetually unfolding narrative, demonstrating her gift as a storyteller. “The Kitchen Table Series” (1990), one of Weems’ most seminal works, is widely considered one of the most important bodies of contemporary photography. Through her work, Weems tackles a number of complex contemporary issues, demanding reconsideration of predominant narratives throughout our history.

Weems has participated in numerous solo and group exhibitions at major national and international museums,  including the Metropolitan Museum of Art, The Frist Center for Visual Art, Solomon R. Guggenheim Museum in New York, and the Centro Andaluz de Arte Contemporáneo in Seville, Spain. She is represented in public and private collections around the world, including the Metropolitan Museum of Art, New York City; The Museum of Fine Arts, Houston; the Museum of Modern Art, New York City; Museum of Contemporary Art, Los Angeles; and The Tate Modern, London.

Check website for special holiday hours. Tickets at $18 and free for Armory members.

The health and safety of the public is of paramount concern to the Armory. All ticket-holders must be fully vaccinated. “Fully vaccinated” means that you received your final dose at least 14 days before your performance date. At check-in, ticket-holders will be required to show proof of full vaccination (the New York State Excelsior Pass or a hard copy or photo of your vaccination card) and a government-issued photo ID. Masks must be properly worn inside at all times. Park Avenue Armory surpasses Centers for Disease Control and Prevention and New York Standards for ventilation, observes strict cleaning and disinfecting protocols, and provides disinfecting stations throughout the public areas.