It may have been one of basketball coach Felisha Legette-Jack’s best pre-game speeches. Only this time it wasn’t delivered to her players, but to a group of nearly 50 girls from the Syracuse chapter of the Police Athletic/Activities League (PAL).

“May I ask you guys to repeat after me: I am somebody. … I am worth it. … I too matter. … If you say that proclamation every day, you’ve already won. You can change your life right now,” Legette-Jack said. “Who’s ready to make a change for greatness?” 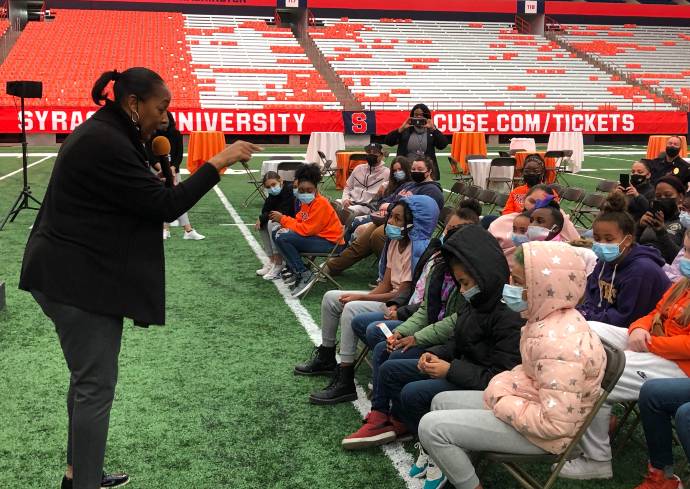 “If you guys don’t believe in you, then tell me, who should?” Felisha Legette-Jack asked a group of girls from the Syracuse chapter of the Police Athletic/Activities League.

“When she told us don’t ever say we can’t, it made me feel like I’m important,” said 10-year-old Lila DeGonzaque of Syracuse at the event.

“When she came to talk to us, she inspired me,” said 9-year-old Francesca Tartt of Syracuse. “It was inspirational.”

Inspiring children is the mission of PAL, and Legette-Jack’s story is as inspirational as they get. Shy and awkward as a child growing up in Syracuse’s Pioneer Homes–informally known as “Brick City”–Legette-Jack grew into a phenomenal basketball player who became a star for the Syracuse University women’s basketball team.

Following her college playing career (there was no WNBA back then), Legette-Jack started a coaching career that included a stop as an assistant coach at Syracuse before she became a head coach at Hofstra, Indiana and now the University at Buffalo. At halftime of the Nov. 14 Syracuse women’s game at the stadium, the University retired Legette-Jack’s jersey –the first such honor for a Syracuse female athlete.

Cydney Johnson, the University’s vice president for community engagement and government relations, worked with Syracuse Police Department Director of Community Engagement Jimmy Oliver to connect the dots between Legette-Jack’s ceremony and the girls from PAL’s basketball league. Johnson invited the girls to attend the game, meet Legette-Jack before the game and sit in the players’ chairs on the court when Legette-Jack’s jersey was raised to the stadium roof and her No. 33 was unveiled on Jim Boeheim Court.

“We wanted to find an opportunity to collaborate and support PAL’s work in a way that would be meaningful and tied to the University community,” Johnson says. “Hosting the girls and their parents and chaperones while we honored a Syracuse native daughter was a perfect opportunity because Felisha is such a great role model and Syracuse University alum.”

The Police Athletic League started in New York City in 1914 with the goal of reducing tensions between police officers and youth. In Syracuse, Police Chief Kenton Buckner and Oliver built on programs that former city parks commissioner Otis Jennings had started by launching the Syracuse chapter of PAL in June 2021. 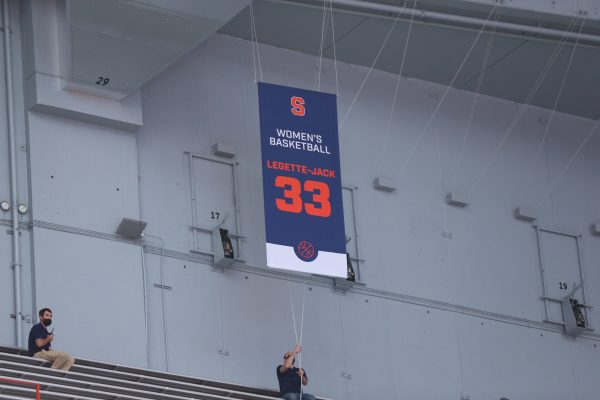 A banner is raised in the stadium to recognize the retirement of Felisha Legette-Jack’s jersey. (Photo by Michael J. Okoniewski-Syracuse University Athletics Communications)

“We’re new, but one thing I can tell you for sure is that we’re going to put our kids around positive individuals from law enforcement and partner with Syracuse University to mentor our kids and help academically,” Oliver says. “We’re going to be intentional, we’re going to be consistent, and we want to develop the whole person and give them opportunities they may not have been exposed to.”

“We’re going to be exploring all sorts of activities, not just athletics,” Shoff said. “This program has been shown to make a difference in kids’ lives in its 100-year-plus history because it helps them make good life choices.”

As a longtime member of the community, Shoff says he knows that the former and current Syracuse University players and coaches are “rock stars” to the children and can serve as positive role models. And Shoff and Oliver says there is no better role model than Legette-Jack for the PAL girls, most of whom are from the Syracuse City School District.

“They’re looking for those positive role models, because a lot of times as kids they don’t feel like it’s attainable because they can’t really relate,” Oliver says. “But to have someone like Felisha being the first woman to have her jersey retired, this could turn on a light bulb for one of these young ladies.”

‘I Just Believed That I Can’

Linda Betts of Syracuse has been an Onondaga County probation officer for 22 years and is now coaching girls basketball for PAL. She’s also a former teammate of Legette-Jack at Nottingham High School in Syracuse and knows firsthand the story that Legette-Jack told the children about being an awkward young girl who through hard work and determination became a standout basketball player who was recruited by 300 colleges. 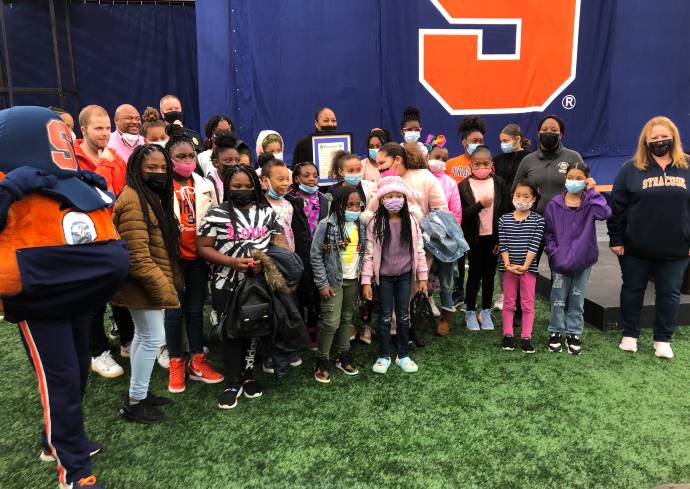 Felisha Legette-Jack poses with the group from the Syracuse chapter of the Police Athletic/Activities League. Legette (back row center) is holding a proclamation from Syracuse Mayor Ben Walsh and Onondaga County Executive Ryan McMahan that declared Nov. 12, 2021, as Felisha Legette-Jack Day in the city and county.

“She was always this fierce force,” Betts says. “She could get the rebound, dribble all the way down the court and then finish it.”

As a coach, Betts said she wants the girls to learn the fundamentals of the sport and what it means to be a good teammate, and to have fun. The life lessons, she says, will flow from there.

“Our mission is to work with youth and to try to pull out what’s in there, because a lot of them don’t believe in themselves,” Betts says.

In her talk with the PAL girls and again during her speech at the jersey retirement ceremony, Legette-Jack said “there’s nothing special about me”–other than her intense belief in herself.

“I just believed that I can,” Legette-Jack told the PAL girls. “And I want you to change your thought right now and say you can. And eventually, what you say to yourself you become.

Tartt, the fourth-grader, and Lila DeGonzaque, the fifth-grader, were later asked what they wanted to be when they’re older. Tartt said she wanted to go to medical school and become a surgeon, while DeGonzaque said she wants to be an FBI agent. After hearing Legette-Jack’s story, both said they now feel those goals are within reach.