NVRC Dedication: ‘Let’s Be the Best University for Vets, Period’ 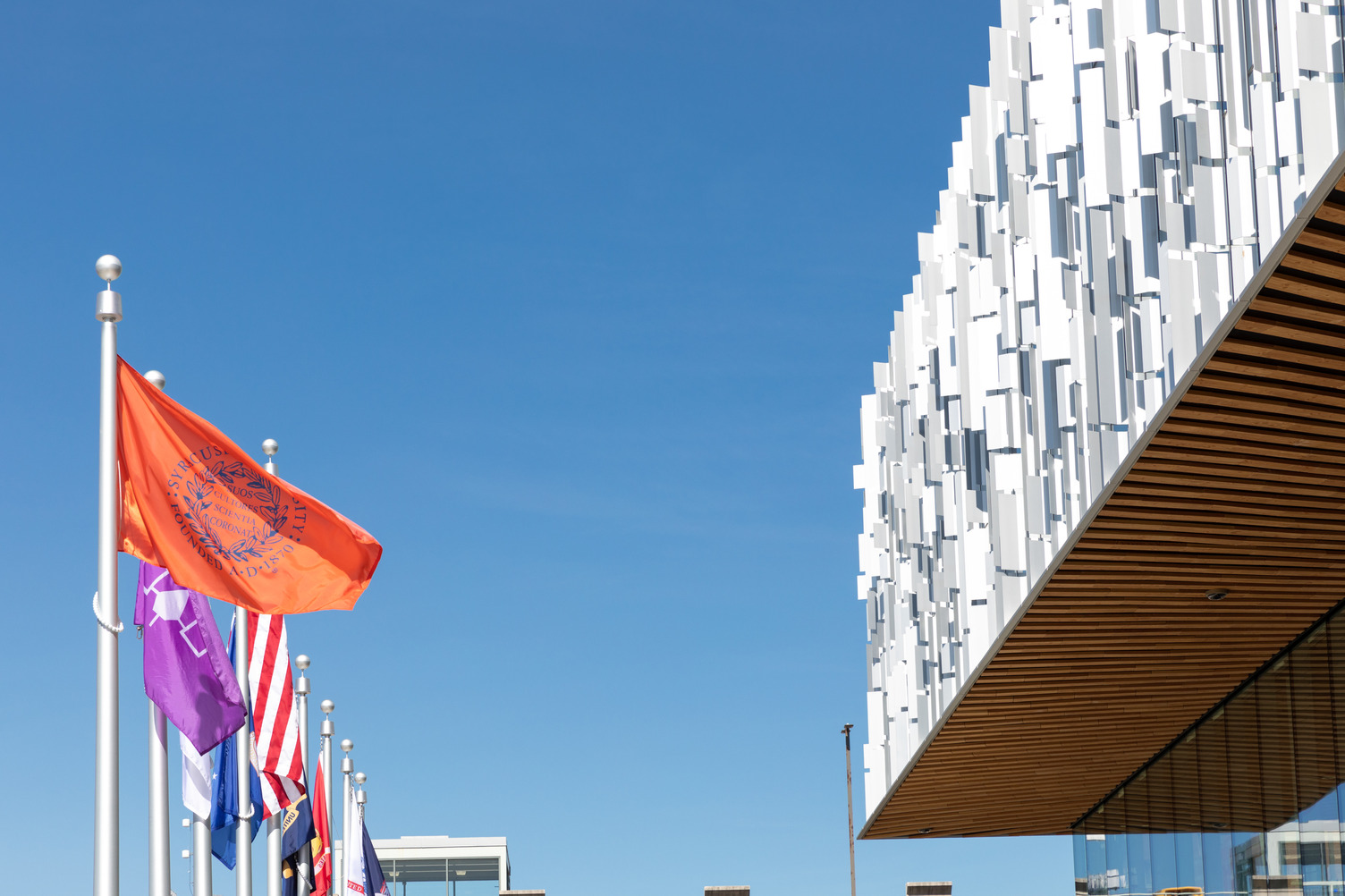 The Nov. 3 dedication of the Daniel and Gayle D’Aniello Building, home of the National Veterans Resource Center (NVRC) at Syracuse University, was a tribute to the past, a celebration of the present and a promise for the future to military veterans and their families.

The event at the K.G. Tan Auditorium at the NVRC recognized the 10-year anniversary of the Institute for Veterans and Military Families, which has served more than 160,000 veterans and their families and is now located in the NVRC.

After a delay of more than a year due to the pandemic, the dedication also marked the official grand opening of a spectacular building that serves as a center of research, innovation and programming in support of our nation’s veterans; acts as a community hub for student veterans and the entire campus; and advances the economic and wellness concerns of the nations’ veterans and their families.

And perhaps most importantly, the event reconfirmed Chancellor Kent Syverud’s commitment that Syracuse will be the best university in the country for veterans and their families.

“So, what is next?” Chancellor Syverud asked. “What is our vision for the next 10 years, for IVMF, for OVMA (Office of Veteran and Military Affairs), and for Syracuse? 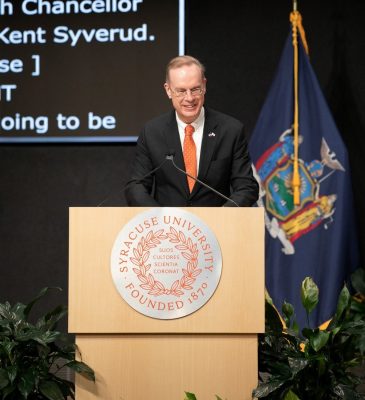 In addition to Chancellor Syverud, other guest speakers included J. Michael Haynie, vice chancellor for strategic initiatives and innovation and IVMF’s founder and executive director; U.S. Small Business Administration Administrator Isabella Casillas Guzman; and Mark Elliott, managing director and global head of military and veterans affairs for JPMorgan Chase & Co., a foundational sponsor for IVMF when it was founded in 2011.

“The NVRC represents a continuation of a long-standing commitment from Syracuse to those who have worn our nation’s uniform and their families,” Bush said. “I thank my friends Dan and Gayle D’Aniello for their transformative gift that made this facility a reality, and for their continued support of our veterans.” 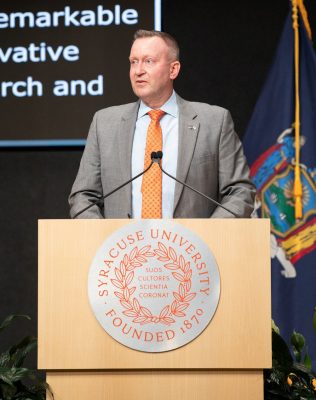 Haynie, whose vision for IVMF started with scribbles on a napkin at a meeting with potential funders, said the NVRC “represents Syracuse’s commitment to paying on the moral accountability in a model of national defense where the many benefit from the sacrifice and service of the few.” Since the draft was eliminated in 1973, Haynie said, less than 1% of the population serves in the military at any time.

Haynie told a story from several years ago, when he was on a plane ride with a Marine Corps veteran named Tim who had served five years, including three in the Middle East. Tim said he had been out of service for six months, couldn’t find a job and was on his way to a VA hospital because the ringing in his ears was preventing him from getting more than two hours of sleep at night.

“He looked at me and said, eyes welling up with tears, worse than all of that, he feels anonymous,” Haynie said.

“The NVRC represents, both in a symbolic and practical way, Syracuse University’s commitment to Tim to telling his story and creating the intellectual and social conditions between those who have served and those who have not to facilitate knowing and inclusion and understanding and empathy,” Haynie said. “Thank you, on behalf of Tim and the many like him in this very room, who because of all those who made this remarkable space and place possible, they will no longer be anonymous while among us.” 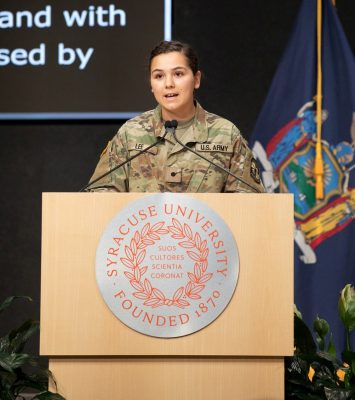 Isabella Lee ’22, an Army ROTC student, provided a reflection and emphasized that the NVRC gives veteran students, ROTC students and veterans and their families a welcoming place where their voices–unlike Tim’s–are being heard.

“My family has served for generations and we’ve seen what freedom costs because soldiers just do not pay with their lives, they pay in their children’s soccer games and school plays, they pay with their peace of mind and sleepless nights that are caused by PTSD, and they pay with every service-related injury and every moment spent away from their loved ones fighting for the freedom of our nation,” Lee said. “I’m so proud to stand here today as a student of an institution that’s ready to pay it forward.”

The IVMF’s ability to pay it forward is the result of a vast network of partners and sponsors who have provided financial support. On Oct. 28, the Small Business Administration announced that the IVMF was awarded a $5 million grant to participate in the new Community Navigator Pilot Program to help the economic recovery efforts of specific communities, including veterans, women and socially and economically disadvantaged individuals.

The building is named in honor of U.S. Navy veteran and Life Trustee Daniel D’Aniello ’68 and his wife, Gayle, who provided a $20 million gift in support of the construction of the facility. While on campus for the dedication, Daniel and Gayle announced a $30 million gift to support the creation of an endowment to provide annual operational support for the IVMF, ensuring it remains the nation’s leading academic institute focused on the concerns of America’s more than 20 million veterans and their families. 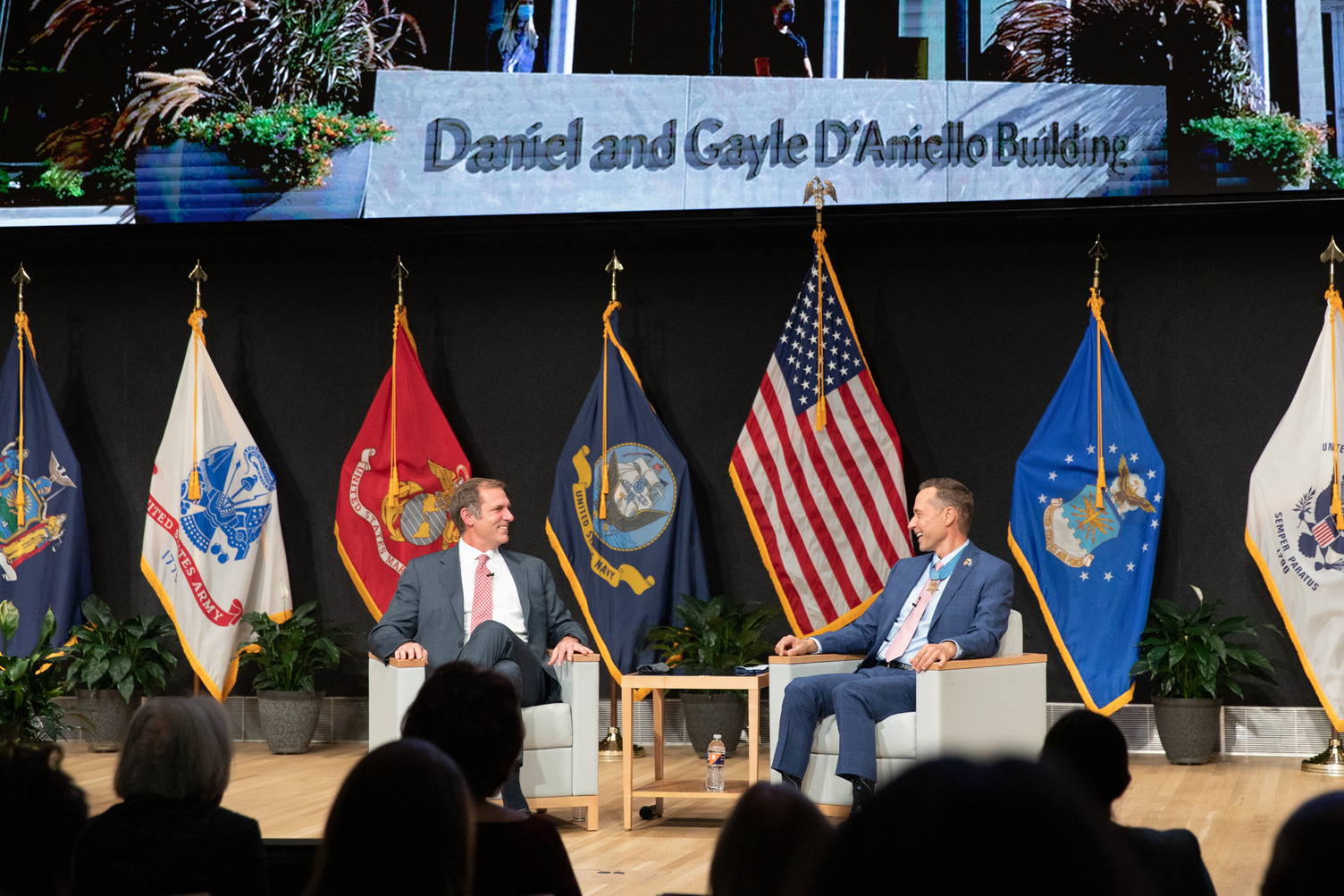 Miguel Pica, a student veteran who will graduate in December and is the Syracuse University PAVE (Peer Advisors for Veteran Education) team leader, said to him, the Daniel and Gayle D’Aniello Building represents the University’s commitment to veterans and how that commitment will only get stronger.