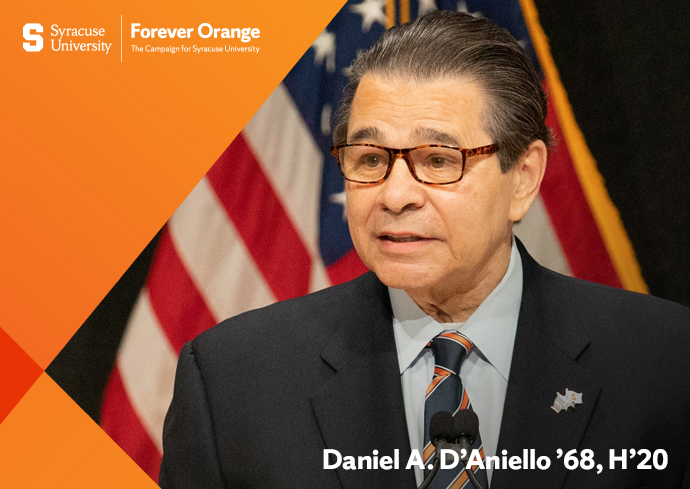 This week the Syracuse University community came together to dedicate and formally open the National Veterans Resource Center (NVRC) at the Daniel and Gayle D’Aniello Building, and to celebrate the 10-year anniversary of the Institute for Veterans and Military Families (IVMF). At the dedication event, U.S. Navy veteran and Life Trustee Daniel D’Aniello ’68, H’20 and his wife, Gayle, announced a $30 million gift to secure the future and long-term success of the IVMF. The gift, which builds on the D’Aniello family’s $20 million gift in 2018 to help construct the NVRC, will support the creation of an endowment to provide annual operational support for the IVMF, ensuring it remains the nation’s leading academic institute focused on the concerns of America’s more than 20 million veterans and their families. With this latest gift, Forever Orange: The Campaign for Syracuse University, a $1.5 billion fundraising campaign exceeded $1.048 billion in funds raised.

“Dan’s love for Syracuse University goes beyond alumni loyalty or the responsibility as a trustee,” says Chancellor Kent Syverud. “The D’Aniellos are invested in our vision for serving veterans and military-connected families. It is impossible to measure the ripple effect that his leadership and support have had on our community. Thanks to the D’Aniellos, Syracuse University’s commitment to veterans will continue to grow, to aspire to new and better programs, and to make a tangible difference to those who have served our nation.”

Founded in 2011, over the past 10 years the IVMF has grown to become one of the most influential centers of thought leadership, research and programming focused on the nation’s veterans and military families. The IVMF designs and delivers programs—at no cost to veterans, military-connected individuals and families—focused on vocational skills training, career preparation and business ownership, while also conducting actionable research, policy analysis and advocacy. With the support of public- and private-sector partners, the IVMF also works in communities across the U.S., supporting efforts to help veterans and their families navigate the transition from military to civilian life.

The D’Aniello family’s commitment to service is at the heart of the decision to extend support of IVMF, the NVRC and other veterans-focused initiatives at Syracuse University.

“The IVMF is doing the kind of groundbreaking work that is vital to understanding and breaking down the barriers facing veterans and their families as they transition from military service to civilian life,” says D’Aniello. “The institute’s innovative programs and services provide veterans an opportunity to find a meaningful career or launch their own business. In turn, our nation’s veterans and their families contribute to their communities and serve their country in new and profound ways. Gayle and I are honored to support this work that is taking place at the University that means so much to us.”

Daniel D’Aniello, a U.S. Navy veteran and co-founder and chair emeritus of The Carlyle Group, serves as co-chair of the IVMF Advisory Board and was recognized during the Class of 2020 Commencement with an honorary doctor of humane letters. He also serves as chairman of the American Enterprise Institute (AEI) and the Wolf Trap Foundation for the Performing Arts. He earned a bachelor’s degree in 1968 from what is now the Martin J. Whitman School of Management and was later named alumnus of the year. He was drafted into the U.S. Navy in 1968 and spent three years serving as a supply officer aboard the USS Wasp (CVS 18). Following his military service, D’Aniello continued his education at Harvard Business School, where he earned an MBA and was also a Teagle Foundation Fellow. In 2016, D’Aniello was awarded the U.S. Navy Memorial Foundation’s Lone Sailor Award for drawing upon his Sea Service experience to achieve success in his personal and professional life while exemplifying the core values of honor, courage and commitment.

J. Michael Haynie, vice chancellor for strategic initiatives and innovation, created the IVMF at Syracuse University in 2011. Haynie credits the support the University has received from the D’Aniello family for making it possible for the IVMF to provide training, educational programming and community-based services to more than 160,000 veterans and military families since its founding in 2007.

“Dan’s commitment to our work has been transformative, and now his commitment to create an endowment ensures that the work of the IVMF can continue for generations to come,” says Haynie. “Dan’s support also enables the IVMF team to act entrepreneurially, in pursuit of innovative opportunities. Our ability to pursue new initiatives will be enabled by Dan’s ongoing support and his commitment to seeding innovation across the IVMF’s programs, services and research,” says Haynie.

The D’Aniello family has given back in meaningful ways in support of many organizations and communities. His philanthropic work is far-reaching, with a focus on education, mental health, the performing arts, veterans, entrepreneurship and faith-based organizations.

About the Institute for Veterans and Military Families at Syracuse University

The Institute for Veterans and Military Families (IVMF) is the first interdisciplinary national institute in higher education focused on the social, economic, education and policy issues impacting veterans and their families. Through its professional staff and experts, the IVMF delivers leading programs in career, vocational and entrepreneurship education and training while also conducting actionable research, policy analysis and program evaluations. The IVMF also supports communities through collective impact efforts that enhance delivery and access to services and care. The institute, supported by a distinguished advisory board, along with public and private partners, is committed to advancing the lives of those who have served in America’s armed forces and their families. For more information, visit ivmf.syracuse.edu and follow IVMF on Facebook, Twitter and Instagram.

About the National Veterans Resource Center

The National Veterans Resource Center (NVRC) at the Daniel and Gayle D’Aniello Building is a class-leading exemplar of academic, government and community collaboration. The NVRC functions as the center of veteran life on the campus of Syracuse University, in the local community, and across Central New York. Specifically, the NVRC leverages a public-private sector partnership model to nurture academic research, actionable programming, and collaborative thought leadership positioned to impact veterans and their families on the campus of Syracuse University, in New York State, and in communities across the U.S. Home to the Institute for Veterans and Military Families, the NVRC houses state-of-the-art vocational and educational programs designed to advance the economic success of the region’s and the nation’s veterans and military families, and also serves as a platform through which to seed, nurture, and coordinate veteran-connected academic research and technology commercialization. To learn more about the NVRC, visit nvrc.syr.edu.