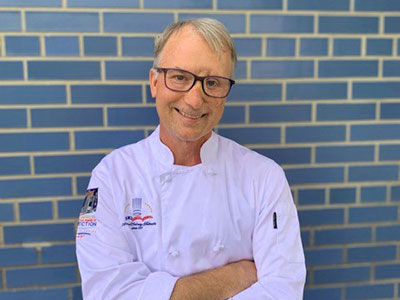 Food Services has hired a new executive chef with deep roots in the Central New York region. Chef Eamon Lee brings over three decades of experience in the food services industry to the University. In the near term, Eamon will look to create a culinary training program for the Food Services department. He will also be listening to student, staff and faculty feedback as his team crafts menus and concepts for the University’s dining centers, cafes, and catering and concessions operations.

“Eamon has a depth of experience, passion and energy we are lucky to have at Syracuse University,” says Jon Webster, executive director of hospitality. “He has worked in food service operations of all sizes. He has deep roots in and a strong passion for all things Syracuse.”

A Central New York native, Eamon started his career in high school at age 16 as a dishwasher and cook at The Wellington House in Fayetteville. He has worked at several iconic CNY establishments, including the Brewster Inn and The Lincklaen House in Cazenovia and in 1995, he was the opening sous chef at The Arad Evans Inn. 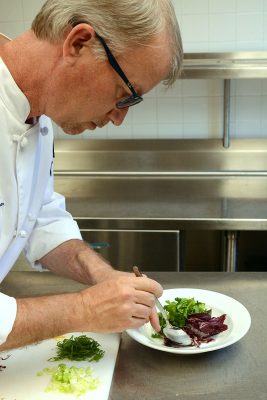 After a year in Manhattan working with two James Beard Award-winning chefs, he returned to Syracuse and accepted his first executive chef position at 238 Bistro (now Bistro Elephant) in Armory Square. In 1999, he became the executive chef at the Century Club of Syracuse, where he remained for 10 years.

In 2008, he took his career to food service distribution as a culinary director and kitchen design consultant, advising independent restaurant owners and chefs throughout upstate New York. He remained there until the executive chef position at the University opened.

When not working, Eamon enjoys the outdoors and traveling with his wife Amie, herself a Syracuse alumna, and biking, canoeing, bee keeping, foraging, gardening, fly-fishing, or building fine furniture.