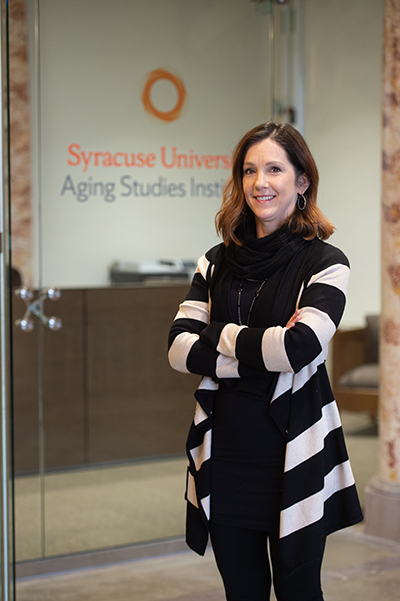 “Beyond my wildest dreams.” That’s how sociology professor Jennifer Karas Montez describes her reaction to being named University Professor. The appointment is a prestigious distinction granted to faculty who excel in their fields and who have made extraordinary scholarly contributions as judged by their peers nationally and internationally. Montez’s appointment was recently approved by the Syracuse University Board of Trustees following recommendations from the sociology department, Maxwell School and University leadership.

“I absolutely love what I do,” says Montez, professor of sociology, Gerald B. Cramer Faculty Scholar in Aging Studies, director of the Center for Aging and Policy Studies (CAPS) and co-director of the Policy, Place, and Population Health Lab in the Maxwell School of Citizenship and Public Affairs. Montez has built a career around asking “big questions” in the search for solutions to some of life’s most pressing public health problems: Why do people in one state live longer than those in other states? Why is the United States losing ground in its international ranking in life expectancy? Why is life expectancy worse for lesser-educated adults than most other groups? What can be done to reverse these disturbing trends and change life trajectories?

It is noteworthy that Montez dramatically changed the trajectory of her own life because of her fascination with these kinds of questions. Her childhood years were marked by “hard times.” Though her mother never went to college, she insisted that Montez do so. With an undergraduate degree in math and a master’s in statistics, both from Purdue University, Montez got a job in the private sector. But her work in pharmaceuticals, food and beverage, and petrochemicals did not satisfy her.

“By all standards, I had an amazing and financially-rewarding career,” says Montez. “But my spirit was unfulfilled and at age 37, I quit my job and went back to school. My biggest risk was a game changer for me. It’s not an exaggeration to say that my upbringing and experiences literally impact everything I do every single day.” She recognizes that the population health work she now does can literally change the trajectory of millions of lives—and dramatically improve them.

“Jennifer is so deserving of this recognition,” says Zhanjiang (John) Liu, interim provost and vice chancellor. “Her scholarly pursuits and passion for public health bring significant recognition and critical resources to the entire University to continue to pursue relevant and impactful work.”

Her work was recognized in 2018 when she was named an Andrew Carnegie Fellow, a prestigious fellowship in the social sciences and humanities. Known as “brainy awards,” the fellowships provide funding for research that “shows potential for meaningful impact” and “the capacity for dissemination to a broad audience.” For Montez, the funding meant a greater opportunity to study polarization in state policies and its impact on life expectancy. She has already shared findings with state legislators to help them understand the downstream impact of their policy work.

As a member of the Syracuse University research cluster on Aging, Health and Neuroscience, she has also received significant grants from the National Institute on Aging (NIA). A five-year $2.1 million NIA grant supports the Center for Aging and Policy Studies, a consortium of three upstate New York universities. CAPS research is designed to improve the health, well-being and independence of older adults. It is one of 12 such centers across the country. Montez is the director of CAPS and principal investigator for the grant.

Another five-year $2.3 million NIA grant, for which she is a co-principal investigator, leads the national Network on Life Course Health Dynamics and Disparities in 21st Century America, an interdisciplinary group of 75 scholars looking at why life expectancy in the United States is not keeping pace with other nations.

Montez is also the principal investigator of a five-year $1.7 million NIA grant to examine how U.S. states’ policy contexts affect life expectancy for people with different levels of education. “When we started our work a decade ago, we faced an uphill battle,” says Montez. “We believed that state policies really mattered, but the focus at that time was on neighborhoods. Over time, people started to pay more attention and, with the pandemic, there’s a greater awareness of the consolidation of power at the state level. States have taken power away from cities and towns, and been given more power from the federal government. Policies on mask mandates, eviction moratoriums and stay-at-home orders show how states will continue to be major actors in our lives.”

“In addition to being a talented scholar engaged in research that is shaping the way in which policymakers think about issues and the decisions that are made about programs, clients and resources, Jennifer is an engaging and highly sought-after teacher that challenges her students to think through the multidimensional contexts of real-life issues that impact the livelihoods of disadvantaged populations,” says David Van Slyke, dean of the Maxwell School.

“Jennifer’s ability to communicate complex ideas in an accessible manner and with humility and empathy for those she’s engaging is one more reason she’s having the impacts that led to her being named a University Professor. And, we are so delighted that she is with Maxwell and SU making those contributions and changing the communities she serves for the better,” he says.