Jennifer Karas Montez, the Gerald B. Cramer Faculty Scholar in Aging Studies in the Maxwell School of Citizenship and Public Affairs, has been named a 2018 Andrew Carnegie Fellow, the most generous and prestigious fellowship in the social sciences and humanities. According to an announcement by the Carnegie Corporation of New York, Karas Montez and 30 other “extraordinary scholars and writers will each receive up to $200,000, making it possible to devote their time to significant research, writing and publishing.” 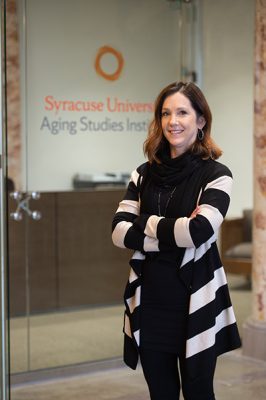 A sociologist and demographer, Karas Montez examines the large and growing inequalities in adult mortality across education levels and geographic areas within the United States. “Our life expectancy is increasingly being shaped by where we live in the U.S.,” explains Karas Montez. “For example, in 1980, life expectancy in Mississippi and New York differed by just 1.6 years. Over the next three decades, that difference exploded to 5.5 years.”

At Maxwell, Karas Montez uses large data sets from the National Center for Health Statistics to formulate and answer a variety of compelling questions related to population health. For example: Why is the life expectancy of low-educated white women in the United States declining? Why do adults in some U.S. states develop health problems nearly two decades before adults in other states? How has the changing policy environment of states contributed to these patterns?

According to Karas Montez, in the 1950s and ’60s there were not many differences between states in their social, economic and health policies. “But by the 1970s and ’80s, states began taking very different approaches to things like Medicaid generosity, and whether they offer a state earned-income tax credit, and how aggressively they raised cigarette taxes,” she says. The Carnegie Fellowship will allow Karas Montez to accelerate her research documenting how state policies have changed across the U.S.—the result of deregulation, federal devolution and state pre-emption laws—and how residents’ well-being may have been affected.

“We at the Maxwell School are enormously proud of Jennifer’s accomplishments, and we are equally grateful to the Carnegie Corporation of New York for their unparalleled support of social science research toward the public good,” says David M. Van Slyke, dean of the Maxwell School.