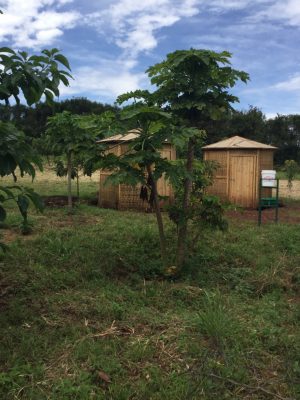 Porcini, portobello and cremini … you’ve probably heard of these types of mushrooms, but how about mycelium? Literally translated as “more than one,” mycelium is the vegetative part of a fungus consisting of a network of interwoven thin, white filaments. When compared to a plant, mycelium is the root structure, and the mushroom is the flower.

With the right nutrients present, fungal mycelium can grow in a wide range of simple organic materials including cardboard, sawdust and some forms of agricultural waste. When treated, the network of fibrous threads transforms into a foam or wood-like composite material that is lightweight and biodegradable, making mycelium-based materials a promising new architectural paradigm.

Over the past two years, School of Architecture assistant professor Nina Sharifi and Daekwon Park, associate professor and undergraduate chair at the school, have been investigating innovations at the scales of systems, construction methodologies and whole building design. With Sharifi’s research into low-carbon building technologies and Park’s expertise in architectural materials and fabrication, the two observed that the unique properties of fungal mycelium—a low-energy, low-carbon footprint bio-based material—had potential applicability in many fields.

“Attributes of working with mycelium include its sustainable material life cycle—as it is grown, not harvested; its ability to take the shape of any formwork; and its strength while remaining lightweight, among other properties that may be of interest to multiple scientific applications,” says Sharifi.

In 2020, through the support of the Collaboration for Unprecedented Success and Excellence (CUSE) Grant Program and the Syracuse Center of Excellence (CoE) Faculty Fellows Program, Sharifi and Park formed the collaborative Mycelium Research Group (MRG), with experts in materials science, biology and engineering, to conduct interdisciplinary mycelium-based research across a range of exploratory applications, including architecture.

Building on Sharifi’s prior research in low-carbon architectural systems, her lab has been working on the development of modular prototypes, testing and material hybridization with a focus on the design and integration of mycelium into low-carbon buildings. 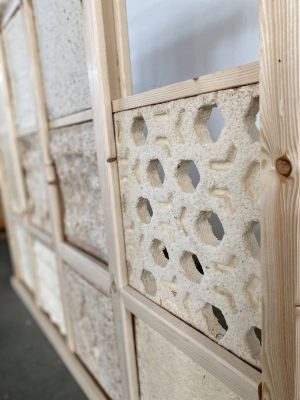 Abstracted Rwandan patterns are integrated into interior partition modules along with waste plastic, while frames are constructed of materials that will be locally available on-site.

Upon hearing about Sharifi’s mycelium research, School of Architecture associate professor Yutaka Sho approached her about developing mycelium building elements for production and use in Rwanda—a context in which Sho and her colleagues at the nonprofit architectural design firm, General Architecture Collaborative (GAC), have been working for twelve years—where multiple building types including housing, restaurants and schools, in both urban and rural areas, were in various design phases.

“Nina told me she has been working with mycelium and we were both excited,” says Sho. “I was happy to find someone who was committed to developing sustainable and affordable building material, and she was psyched that I had actual projects in Rwanda that we could apply the research, with real sites, needs and constraints.”

By measures of sustainability, energy savings and constructability, the mycelium hybrid building systems that Sharifi’s lab had been researching seemed a good fit for the unique challenges inherent to Rwanda, a country with few paved roads and limited local building materials such as concrete, wood or steel. What the country has abundantly, however, are earth and people power, both of which GAC has been trying to promote in their architectural research and practice.

“The process of constructing modules was designed to approximate packing earthen bricks into molds, which could be done by most people; the mycelium hybrids were lightweight; and the material could be produced locally or on-site in growth chambers,” says Sharifi.

Through their research, Sharifi and Sho have begun to develop two lines of inquiry for mycelium-based construction materials in Rwanda: one for the service (urban) industry and one for the agricultural (rural) industry. The former use of the products is to apply them in offices and restaurants as ceiling panels and partitions since the ones currently used in Rwanda are low quality, imported and have a high carbon footprint. The latter use is in farming communities where the mycelium blocks can be used to construct mushroom-growing huts, essentially using mushrooms to make the structure that mushrooms grow in.

With the parallel goal of using recycled materials, Sho engaged Carene Umubyeyi, a student studying civil engineering at Massachusetts Institute of Technology, a former architecture intern at GAC and a native of Kigali, the capital and largest city in Rwanda, in researching local material and waste flows in the country so that abundant waste products can be used as a mycelium growing substrate. 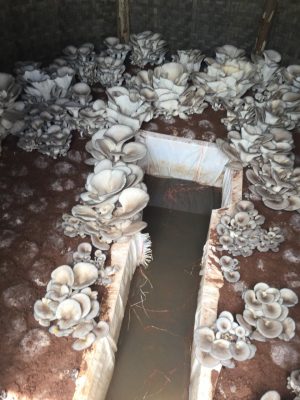 “In order to remove harmful waste from the environment, we investigated the continued availability of plastic waste, such as single-use beverage and polyethylene terephthalate (PET) bottles, in Rwanda,” says Umubyeyi. “The hope is to collect waste products from private waste management companies in and outside the city of Kigali, which we can process and utilize as a potential substrate material.”

Meanwhile, back in Syracuse, Sharifi’s team of interns, including Zoe Quinones ’23 (B.Arch), Morgan Noone G’23 (M.Arch) and Kiana Memaran Dadgar G’23 (M.S.), have sourced and begun to integrate the same substrate materials in the lab’s controlled environment where they can test the performance of the mycelium-based construction materials under different environmental conditions.

“The goal is to minimize transport of physical modules to Kigali, and send nothing but initial formwork, raw materials and detailed design documentation and written manufacturing protocols,” says Sharifi.

Sharifi and Sho’s joint effort is ongoing as research yields new prototype designs and methods at Syracuse University while fabrication and construction are set up in Kigali.