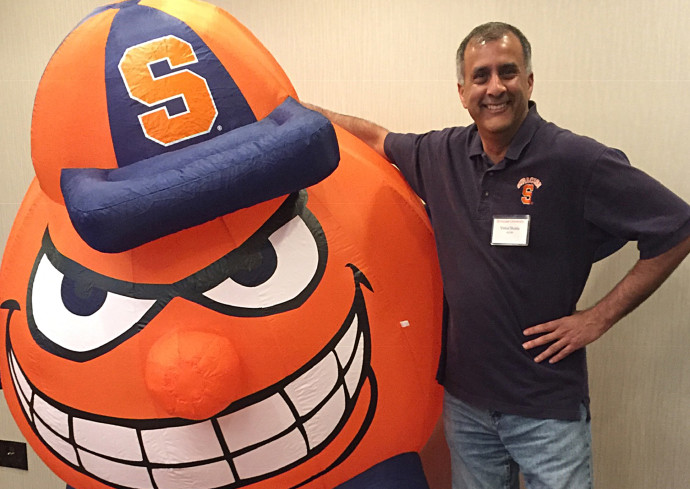 The concept of luck goes against the principles of engineering. Luck happens without design. The story behind most great careers may sometimes include luck, but the truth behind it is usually years of hard work, continued learning and the application of knowledge. In many ways, that is the story behind Vishal Shukla ’89. Currently, he is a senior customer success manager in Microsoft’s business applications division, but despite all his accomplishments, he still partially attributes his outcome to another variable—chance.

“I don’t know if I would consider myself successful, but I’ve been lucky and a lot of that came from my parents,” says Shukla.

Shukla had the good fortune of growing up in a family that stressed the value of education. Understanding the importance of learning gave him a solid foundation to build upon and it led him to begin thinking about laying a similar bedrock for future students in the College of Engineering and Computer Science. Through a gift to the Forever Orange Campaign, Shukla is honoring his parents and their emphasis on education by establishing scholarships in their names to benefit future students.

“I wanted to do something with my estate that would add value,” says Shukla. “I thought back to the benefits and what I got out of being at Syracuse University for four years. Providing other people with the opportunity to do the same would be a great way to make a difference.”

Shukla’s parents immigrated to America from India and Shukla was the first member of his family born in the United States. He grew up in Westchester County, north of New York City, and the only college campus he visited was Syracuse University.

“I loved the campus. It gave you a feeling of community,” says Shukla. “What appealed to me about Syracuse University was the variety of programs. I could study anything and get a high-quality education.”

Shukla decided to study electrical engineering, but his time on campus became bigger than a single field of study. Shukla discovered an affinity for karate, which he continues to practice and teach to this day. He fondly remembers experiencing iconic moments in Syracuse sports history, like the football team’s undefeated season in 1987. He still keeps in touch with the friends he made his freshman year, and he enjoys meeting alumni from different generations that share similar memories. These are the distinctions and the spirit he talks about with West Coast students considering Syracuse University.

“You have the opportunity to go out and find whatever knowledge you want at Syracuse University because it is such a diverse and inclusive campus,” says Shukla.

After graduation, Shukla went to work as design engineer for Dynacast International. He started his job and graduate school for computer science on the same day. Upon completing his first master’s program, he was directed to look at something Dynacast International had just purchased called salesforce automation (SFA). Shukla became the project leader for the global rollout of SFA and it led him into the IT and software industries. He went on to hold positions at Oracle, Salesforce and now Microsoft. Along the way he added three more master’s degrees to his list of academic achievements:one in business administration, another in organizational psychology and one more in organizational leadership.

The values instilled in Shukla by his parents are at the core of all he has attained and his gift will ensure those principles continue to ripple through to future generations. For aspiring engineers and their families, a scholarship can be more akin to lowering a drawbridge than opening a door. Reducing barriers for brilliant young students can have a long-lasting and far-reaching impact.

“I’d like to think that one kid, that might not have been able to stay, got a scholarship and then went out and did something that changed the world,” says Shukla. “If you’re lucky enough to have a good career, you can pass those values on to your kids. It’s ongoing.”

While there is no way to measure the role chance plays in any career, it is likely the chance Shukla is giving to young talent that will have a quantifiable impact for years to come.

“It’s incredible to think what our alumni base could be over the next few decades. I’d love to help bring that opportunity to future students,” says Shukla.