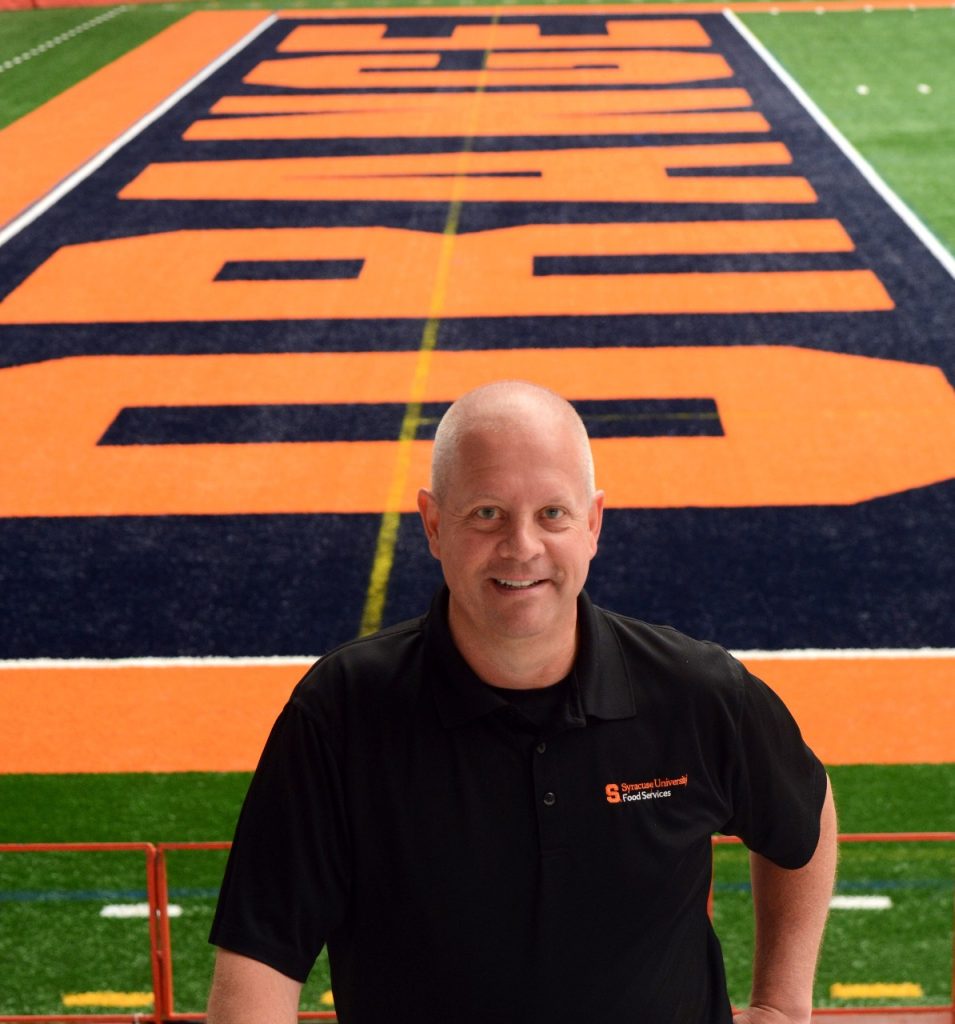 Mark Tewksbury, director of residence hall dining and Dome operations for Food Services, has been a fixture at the University since he stepped onto campus in 1980 as a first-year student in the College of Arts and Sciences. A 40-year employee of Food Services, Tewksbury began his very first semester on campus as a student employee in Brockway Dining Center. After a long and varied career, he will retire from the University on July 31, 2021.

“Mark has dedicated four decades of his life to serving the students, staff, faculty and visitors of his beloved alma mater,” says Kris Klinger, associate vice president of Auxiliary Services. “His willingness to do whatever it takes enhanced and impacted countless student experiences for generations. Mark Tewksbury embodies what it means to be Orange.”

Tewksbury was in the crowd at the first-ever football game at the new Carrier Dome, never expecting that in just a few years, he would be running the stadium’s concessions operations for the better part of his professional career.

He worked his way up through the ranks in Food Services—he was a student supervisor at Brockway, the student coordinator for all dining centers and then took a job at campus catering after he graduated. After a year, he was assigned to catering operations at the Dome. After a short time away—he opened the Goldstein Student Center in 1990—he was back to the stadium, where he’s been ever since.

His wildest Dome memory? A Rolling Stones concert during their 1989 “Steel Wheels” tour. Tewksbury was at home mowing his lawn when the University’s concessions manager peeled into his driveway. Another Food Services manager was in the hospital, and in a time before cell phones, the quickest way to recruit Tewksbury to step into a managerial role on the night of concert was to drive to his house and tell him to get into the car. There were 40,000 people in the stadium that night.

“When I arrived in the kitchen, the wall was covered in function sheets [catering order forms]. I had never seen one before,” says Tewksbury. “I just had to jump in and figure it out.”

He’s been witness to decades of University history: historic concerts, games, triumphs and community tragedies. After the Labor Day storm of 1998, the University’s facilities still had power, unlike tens of thousands of homes in nearby neighborhoods and the greater Central New York area. Then-Chancellor Kenneth Shaw opened the University’s Food Services facilities to the entire community, instructing staff to “feed everyone who came through the doors.”

Tewksbury recalls pitching in and being told “Just cook something!” by the manager of the dining center. They would feed two or three thousand people at Shaw Dining Center each night until the area recovered, and power was restored. Tewksbury remembers feeling an incredible sense of pride at how the staff managed to make their way to campus and offered to help any way they could.

He experienced the same emotions in 2020. Once the effects of the COVID-19 pandemic took hold on campus, Tewksbury and the Food Services team, essential workers all, were still preparing food and serving students every day, even as the campus emptied. He says it was one of the toughest years of his career.

“Those first few months were just—how do we keep our people safe? How do we keep them from getting sick? Our crew was expected to be here every day, and they just stepped up,” Tewksbury says.

As usual, Tewksbury himself went above and beyond to meet the needs of students. He gave out his personal cell phone number to students entering quarantine or isolation in on-campus housing. They texted him at all hours of the day and night with their requests and meal orders. He and his team worked seven days a week to deliver meals and supplies, to ensure that a scary experience was not made more so by adding food uncertainty to the mix.

Syracuse University has had a profound effect on his personal life as well. Tewksbury met his future wife during his freshman year—she was a concessions student manager in the Food Services department. Their daughter is also an alumna of the University.

Though he will miss his daily interactions with students and the many colleagues he’s befriended over the years, Tewksbury looks forward to spending his retirement with his family—his son in Syracuse, his daughter in Boulder, Colorado, and his mom in Boston. He also hopes to finally enjoy some time on his boat.

He’ll be greatly missed by his colleagues. His co-director, Sue Bracy, knows how difficult it will be to find someone else who cares as deeply about the University and its students.

“I love working with Mark,” says Bracy. “He is honest, kind and hardworking. He came here in 1980 as a student and is leaving 40 years later as a respected colleague and friend.”