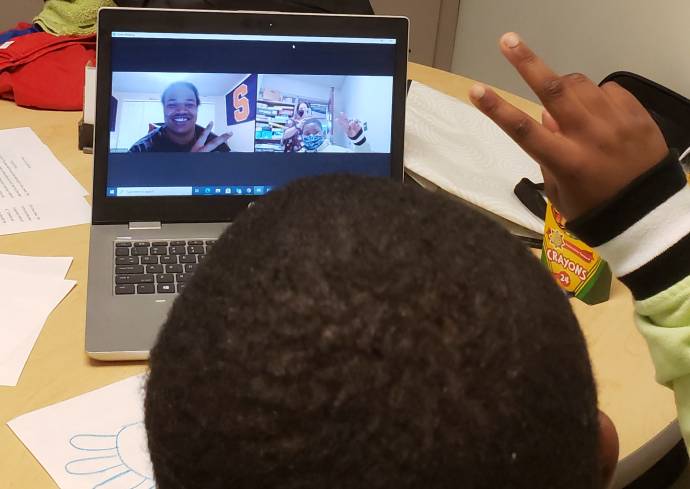 When students at Dr. Weeks Elementary School in Syracuse see Patty Sawmiller in the halls, the questions start flying.

Are you coming to get me today? Are we having mentoring today? When are they coming in?

The students are asking about the one-on-one mentoring they receive from an adult from outside the school through the New York State Mentoring Program. Sawmiller, the community school director at Dr. Weeks, coordinates the program and helps match third- through fifth-grade students with mentors.

“Even if it’s just 15 minutes a week, it feels like the world to some of our kids because this is a special thing that they say I get to be a part of, I get to hang out with my mentor and they like me,” Sawmiller says. “Feeling liked is everything for kids struggling with social-emotional issues.”

Mark Jackson, Syracuse University’s executive director for community engagement, was familiar with the mentoring program and its impact on children and had discussions with Stephanie Parks, the Central New York regional coordinator for the program, about how the University could get involved.

Meanwhile, Syracuse University student-athletes watched the global protests against racial inequality following the murder of George Floyd and started talking about what they could do to promote social justice in the Syracuse community. At a football team meeting last summer, fullback Chris Elmore ’22 brought up the idea of a mentoring program for local students and the players shared the idea with Salatha Willis, associate athletic director for diversity, culture and climate.

Willis checked in with Jackson to see what programs were available, and through that collaboration between athletics and the Office of Community Engagement several football players  started to connect with elementary school students from different Syracuse City School District schools as part of the state mentoring program.

“This is truly a blessing for our student-athletes because they wanted an opportunity to engage and do something meaningful and not just wear a T-shirt or have an event,” Willis says. “Even though those things can be good for drawing attention to community issues of social justice, taking the time that you have during the day and investing in an individual will reap more benefits in the end because it’s more personal.”

Sawmiller says many of the Dr. Weeks’ students who are in the program play sports and follow Syracuse University sports, especially football. To have a player as a mentor, Sawmiller says, is “like being able to connect one-on-one with one of your heroes.”

“You can talk to a whole group of people about something that’s very important and as long as you change one person’s life out of that group, you accomplished something positive because now they’re going to take that message and they’re going to apply it to another group and eventually grab somebody else,” Elmore says. “That’s all it takes.

“As long as we get a message to one kid who can spread it to another kid, we’ve made a positive impact,” Elmore adds. “Even though we want more, as long as we can change one, we know it’s going to trickle down.”

Helping Young Students ‘Become What They Want to Be’

The New York State Mentoring Program was created in 1984 by Matilda Raffa Cuomo, the wife of Gov. Mario Cuomo, as the nation’s first statewide, one-to-one mentoring program to help prevent school dropout. Suspended when Mario Cuomo left office, the program was reinstated in 2015 by current Gov. Andrew Cuomo, who named his mother as chairperson.

According to the program website, children who succeed despite overwhelming personal, economic and social obstacles usually do so because of a caring adult in their lives. Mentoring outcomes include greater participation in school, improved attendance, higher graduation and college admission rates, and better overall performance.

“Some come from large families where the one-on-one time with an adult is maybe an hour a week, and some come from families are in environments where there’s not a positive role model, male or female,” says Parks, the Central New York regional coordinator. “Usually, it’s the child or children that need an extra little bit of a lift and that extra little bit of a support.”

Parks is no stranger to the University community. Her father, Donald Parks, earned a doctoral degree in instructional design, development and evaluation in 1985; her mother, Francis McMillan Parks, is a former academic advisor at University College, director of Students Offering Service and African American Programs in Hendricks Chapel, and adjunct professor who may return to teach in the fall; and Stephanie received a bachelor’s degree in 1997 and master’s degree in social work in 2015 and worked at the University as director of development and at the College of Law.

“I knew Mark (Jackson) from community engagement was very interested in our program and then he got a call saying that the athletics department was interested too,” Parks says. “I always see Syracuse University as a wonderful opportunity to engage kids and the community, so it was a natural fit.” 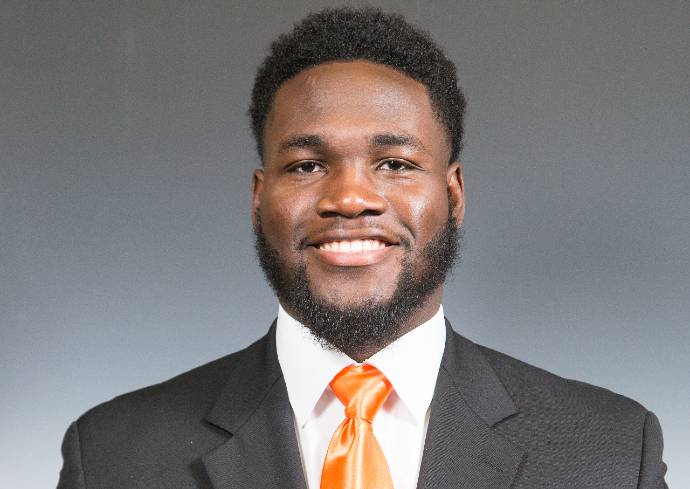 For Jackson, the state mentoring program dovetailed nicely with other partnerships between the Office of Community Engagement and athletics, such as the Adopt A Classroom program initiated earlier this spring. And it helped that the University was joining an established program that had all the pieces in place to connect the football players with the right students.

“The program is very well done, and they have site coordinators at every school and organization where they have a mentor,” Jackson says. “The site coordinator is working with the teacher and administrators, and they focus on making matches and making sure there’s some chemistry there.”

Willis says Jackson and Cydney Johnson, vice president for community engagement and government relations, did “a phenomenal job” finding a “plug-and-play” mentoring program that fit with the players’ busy schedules. The New York State Mentoring Program provides background checks and training for volunteer mentors and the site coordinators like Sawmiller work with Parks to make the matches because they are most familiar with the students’ needs.

“We had to go through the applications, training and background checks, but in the long run it’s going to be extremely beneficial for our students because they don’t have to do a lot of work just to get in front of the students,” Willis says. “Everything is there for them–the curriculum, the conversation points–so it’s a lot easier given the time barriers that the student-athletes face and that allows them more freedom to perhaps get other initiatives off the ground.”

This spring,  the meetings between the football players and students were virtual, and they lasted anywhere from 20 minutes to an hour. Sawmiller and Parks say they are hoping in-person sessions can start in the fall, but the good news from this past year is that mentors with busy schedules–such as college football players–will still be able to meet with the students virtually if they can’t make it in person.

“We started with group discussions to give them time to adjust and start talking with us, and that’s the biggest thing,” says mentor Kingsley Jonathan ’22, a defensive lineman. “It’s important because some of them don’t have that person they look up to as mentors and realizing we have such an impact in their lives gives us that opportunity to help them become what they want to be.”

Elmore and Jonathan know the impact that one person can make in a young person’s life.

For Elmore, his role model (along with his father) was Demarius Reed, a football player who, like Elmore, was from Chicago. In 2013, Reed was fatally shot by two men during a robbery in the stairwell of his apartment complex near Eastern Michigan University, where he was a starting wide receiver.

“I’m taking his story and trying to implement it into mine,” Elmore says. “My high school football team opened doors for guys to get out of Chicago and go someplace to succeed. That was something I wanted to do because here was somebody (Reed) who couldn’t do that.”

For Jonathan, his mentor was his high school football coach, Henry Russell at St. Frances Academy in Baltimore. Russell recruited players from the city and provided housing for them so he could keep an eye on their schoolwork and help with their college recruitment opportunities.

“We overlook how big little things we do can affect people,” Jonathan says. “Keeping in mind that just showing up to somebody’s game to support them, or telling them, ‘Great job in the game,’ or just looking out for somebody, those little things can make a big difference in somebody’s life in the long run.” 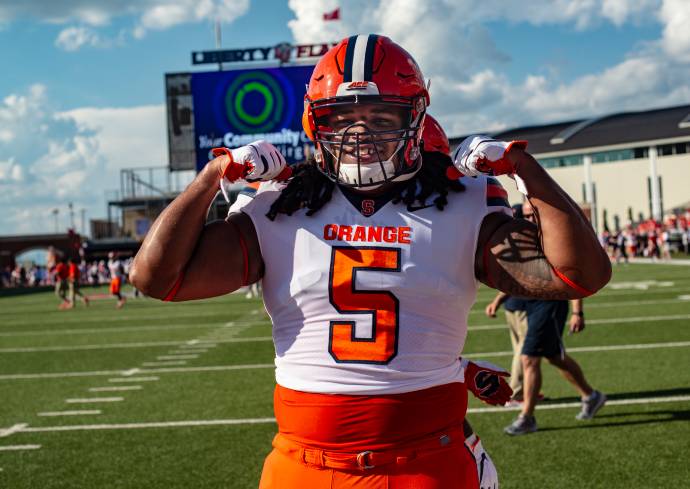 Sawmiller, who has been coordinating the mentoring program at Dr. Weeks Elementary School for the past three years, says she’s grateful mentors like Elmore and Jonathan understand the need to create trusting relationships with male students who may not have many male role models in their lives. The initial group of Syracuse players who are participating in the program include, in addition to Elmore and Jonathan, defensive lineman Caleb Okechukwu ’23, linebacker Tyrell Richards ’21 and defensive back Kyle Strickland ’21.

“We’re starting small, but we see huge potential and we have high hopes,” Jackson says. “And we have potential beyond football to ultimately go throughout athletics and throughout the school.”

Willis says the football players have talked about several other social justice projects, including a community garden to help fight hunger in Syracuse, free summer youth football camps, and youth football involvement during halftime of Orange football games. Elmore says his hope is that one day, the students who benefit from the mentoring program and the other projects will become positive role models for the next generation.

“We’re trying to make sure this (mentoring) program goes on forever,” Elmore says. “We don’t want to be just the pioneers and we leave and it’s done. This is something we want to get in motion for every year and it just becomes a part of Syracuse football.”

How to Become a Mentor

If you’d like to become a mentor or learn more about the program, call 1.844.337.6304 or visit  The New York State Mentoring Program website. Once your mentoring application is received, an appointment will be made for you to interview with a program director. Once you are trained, you will be matched with a mentee at a nearby school and a start date will be provided.