‘Adopt A Classroom’ a Win-Win for Student-Athletes, Syracuse Community

The best part about the program that’s connecting Syracuse University student-athletes to students from the North Side Learning Center in Syracuse is that it’s hard to tell who’s having more fun.

“It’s been really fun to have that interaction,” says Kate Donovan ’22, a member of the Orange women’s soccer team. “Just being able to get on a (Zoom) call and talk to these kids and help guide them through little things, it has been fun and helps us bridge that gap of wanting to be part of the Syracuse community, even during COVID times.”

At the heart of this initiative is a commitment by the University, its current and former student-athletes and the Office of Community Engagement to support and give back to the Syracuse community through these mentoring sessions.

Since March 3, eight student-athletes have been meeting virtually on Wednesdays and Thursdays with elementary and middle school students from the North Side Learning Center who are the children of immigrants. The sessions, which have been both one-on-one and in groups, will run until May 13. 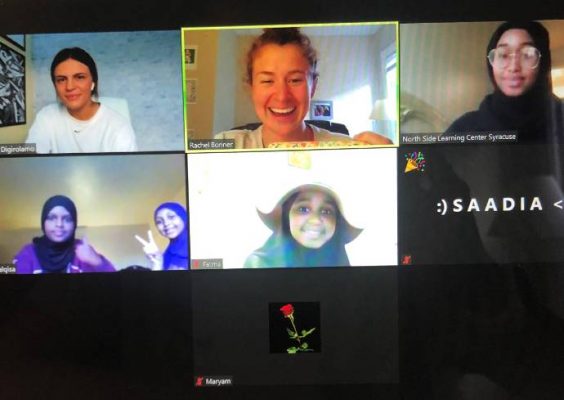 Their discussions are all over the map, from serious conversations about family, school and religion to more light-hearted banter about pets, TikTok dances and braiding hair. Balqisa Mumin, a sixth-grader at H.W. Smith Pre-K-8 School in Syracuse, says she bonded with student-athlete Rachel Bonner ’21 over religion.

“What surprised me was that I didn’t know that many people were religious like we both were,” says Balqisa Mumin, whose parents are from Ethiopia and Somalia. “It’s easier to talk to her because she knows more about her religion and she’s older. I don’t have many Muslim kids in my grade, so they don’t tell me about their religions and things.”

Bonner, a distance runner on the women’s track and field team, says the most important lesson the student-athletes can impart to the students is that there is more that unites us than divides us.

“What I really appreciate about this is how it’s a beneficial relationship for both of us,” Bonner says. “We’re all daughters, athletes, students, sisters, people who identify with religion and practice religion, so it’s very cool to compare and contrast those identities.”

“The childlike resilience they bring to the table at this time is so admirable,” Bonner adds. “It’s something that inspires me to not be too adultlike during the pandemic and to just have that childlike joy about getting the best out of this.”

Connecting with the Community

When Keenan Hale ’15 attended Syracuse University, the former football wide receiver couldn’t help but notice the other world that existed just beyond the campus border.

“I recall on many occasions walking off campus directly under the bridge into the low-income housing area,” Hale says. “To see the inner city, which appeared to have a lack of resources and no one investing time, efforts, energy or money into the surrounding community, was disheartening.”

Hale is a member of the board of directors for the Syracuse Football Club, which started in 2000 as a fundraising platform for former players to give back to the program but in recent years has expanded to provide support to football alumni, the University and the Syracuse community. Hale, who is now a federal lobbyist and senior director of government and regulatory affairs for the advisory firm Ian Reid LLC, is also familiar with the North Side Learning Center because his fraternity performed community service work at the center when he was a student. 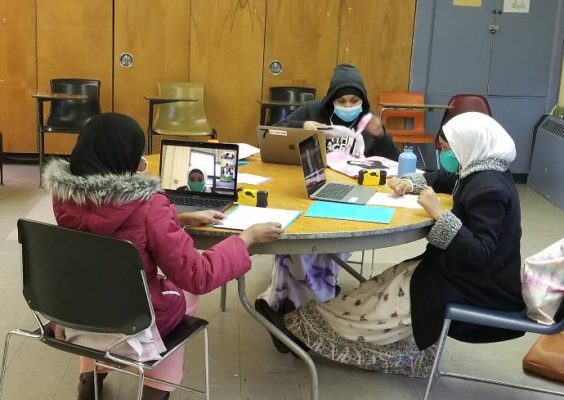 The Football Club became involved with the Adopt A Classroom program at the request of Director of Athletics John Wildhack, who has been working with Associate Athletic Director for Diversity, Culture and Climate Salatha Willis, the newly formed  Diversity and Inclusion Student-Athlete Board (DISAB) and the Office of Community Engagement to find projects that connect student-athletes with the community. The Office of Community Engagement had partnered with the North Side Learning Center for other projects and was familiar with the Adopt A Classroom program.

“When some people look at my position, they only see the diversity and inclusion aspects of it; they don’t see culture and climate,” Willis says. “This program is an opportunity to lift the climate that exists within athletics and push our student-athletes outside of their environment  and into the Syracuse community. And the other great thing about this program is that it’s a cross-collaboration between individuals among multiple teams, so young men and women are operating together in a capacity to mentor and support young individuals within their educational experience.”

The Adopt A Classroom program did require a financial commitment because it’s a means for the center to purchase needed books and supplies for students, and the Syracuse Football Club agreed to pay that cost. Football Club board member and former safety Chris Williamson ’14 says as the club grew and broadened its areas of support, it was important to find projects that impact children.

“The Adopt A Classroom initiative really goes into that aspect of being able to touch lives and make people’s daily lives better,” says Williamson, an award-winning and Emmy-nominated sports anchor/personality for SportsNet New York (SNY). “A lot of times, it comes down to supplies and books and the basic necessities and that touches on some of the things that Keenan brought up about the divide between the University and the community. This program is something to help bridge that gap.”

There are 12 students (seven from middle school and five from elementary school) who are meeting with the student-athletes to create relationships that ideally will last beyond this spring. Many of the North Side Learning Center students will be the first in their family to attend college, and the Syracuse student-athletes are sharing stories of their own journeys to help the younger students achieve their goals.

“When you think about refugees and immigrant families that have language barriers and other obstacles like that, they also need additional resources to navigate this complex American system,” Hale says. “Anytime we can be here to help guide them and provide those resources to that community, it’s an important thing for us to do.”

In the nearly two months since the Adopt A Classroom program started, Syracuse University student and North Side Learning Center teacher Khadija Sharif says she can already see a change in the students at the center.

“They seem to be more confident about their abilities to get into sports,” says Sharif ’23, a student in the College of Arts and Sciences. “It was really nice for our students to talk to them and get to know about their interests and thoughts outside of being an athlete.”

Often, those conversations turn to the future. Fatma Mohamed, a seventh grader at H.W. Smith Pre-K-8 School in Syracuse, says that in addition to running track and playing soccer, she enjoys unique clothing and would like to become “a CEO of a fashion company.” 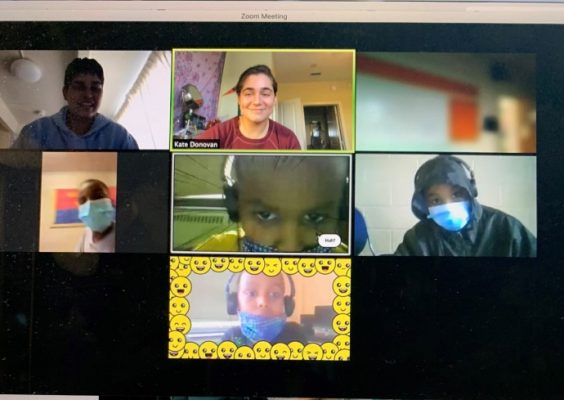 Women’s soccer player Kate Donovan (top center) says “it’s been really fun to have that interaction” with the North Side Learning Center students.

Mumin, the sixth grader from H.W. Smith, has also talked to the Syracuse student-athletes about her career goals.

“When I grow older, I want to be a hair stylist,” Mumin says. “I want to create my own building with three different things: one floor could have where you get your nails done, another place you can get your makeup done, and then the top floor is where I will work and do people’s hair and give them haircuts.”

The Syracuse student-athletes say they are pleasantly surprised by the students’ focus and determination to go to college and have a career. “I don’t think I was in that same place at their age,” Donovan says, smiling.

“They’re very driven and passionate about the things they like and enjoy and a common theme with them is they’re all very family-oriented and talk a lot about how hard their parents and siblings have worked and they look up to their siblings who have gone to school and are working,” says, Donovan, the Orange soccer forward.

Bonner says she was encouraged that the University was able to find a connection that benefits Syracuse’s large immigrant community. And the student-athletes involved in this program say they will encourage other student-athletes to get involved in similar projects because it’s truly a win-win: They’re helping the community and they’re getting as much out of it–if not more–than students they’re mentoring.

“As much as I’m bringing happiness into their life for an hour or so, they’re making me happy as well,” says DiGirolamo, the hockey defenseman. “It’s about building those relationships and wanting them to understand that people are there to support them and care for them.”