In April 2017, a landslide in Mocoa, Colombia, ripped through a local town, killing more than 300 people. Nicolás Pérez-Consuegra grew up about 570 miles north in Santander, Colombia, and was shocked as he watched the devastation on television. 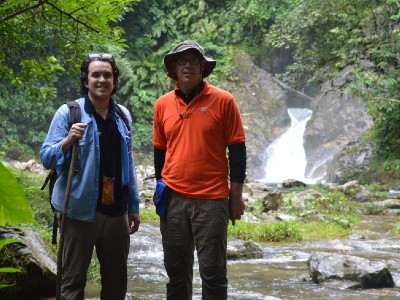 Nicolas Pérez-Consuegra, left, and Professor Gregory Hoke standing in front of a waterfall in the Caqueta Canyon.

At that time, he was an undergraduate intern at the Smithsonian Tropical Research Institute in Panama. As a budding geologist raised hiking the tropical mountains of Colombia, he wondered, what causes greater erosion in some areas of the mountains than in others? And, is it tectonic forces–where Earth’s tectonic plates slide against one another leading to the formation of steep mountains–or high precipitation rates that play a more important role in causing erosion within that region?

To answer those questions would require a geological understanding of the evolution of the mountains in Colombia. During his undergraduate internship, Pérez-Consuegra studied the mountains near the towns of Sibundoy and Mocoa in the southern region of Colombia. There, he observed thick rainforests covering steep mountains and many landslide scars in the cliffs. There were also many landslides on the road, leading him to believe that the tension and release of pressure along tectonic faults was shaking the landscape and removing rocks from its surface and shedding it into the rivers. 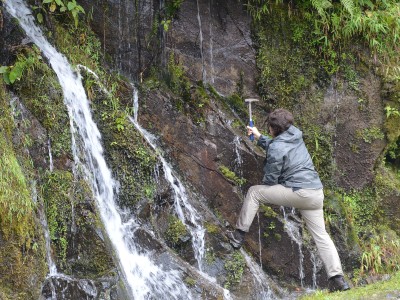 Nicolas Pérez-Consuegra hammering into a rock outcrop to obtain a sample for thermochronology analyses from the mountains in the Putumayo region of Colombia.

To find out more about the forces at play that were shaping the steep terrain of that region, Pérez-Consuegra pursued a doctoral degree in the College of Arts and Sciences’ Department of Earth and Environmental Sciences (EES). He says the opportunity to develop his own research ideas was one of the key reasons he chose Syracuse University. Pérez-Consuegra led the study from start to finish, proposing the research questions, hypotheses and methodology, with help from his Ph.D. advisor Gregory Hoke, associate professor and associate chair of EES, and Paul Fitzgerald, professor and director of graduate studies in EES. He also obtained research grants and support from EES and a number of outside sources including a National Geographic Early Career Grant and more, which fully funded three field expeditions to Colombia and the analytical work on rock samples collected there.

Pérez-Consuegra and Hoke conducted field research in the Eastern Cordillera portion of the Colombian Andes. During those expeditions, the team hiked and traveled by both car and boat to various altitudes to collect over 50 rock samples. Rocks were then shipped to Syracuse University and processed in labs to extract the thermochronology data.

According to Pérez-Consuegra, a thermochronometer is like a stopwatch that starts ticking once a rock cools through a specific range of temperatures, keeping track of the time it takes for the subsequent journey to the Earth’s surface. The mineral apatite is the radioactive stopwatch that he employs in his studies. Several kilograms of rock sample are processed to yield a few grams of apatite which contain two types of temperature-dependent stopwatches, or thermochronometers. Researchers can figure out the long-term erosion rate by figuring out how fast a rock moves toward the Earth’s surface, using a formula that converts temperature to depth below the Earth’s surface and then dividing depth by time.

Pérez-Consuegra’s study revealed that the highest erosion rates occur near the places that have the most tectonically active faults. While precipitation may act as a catalyst for erosion on the surface of the mountains, the main force at play are faults where rock is exhuming from deep below the Earth’s surface at faster rates. 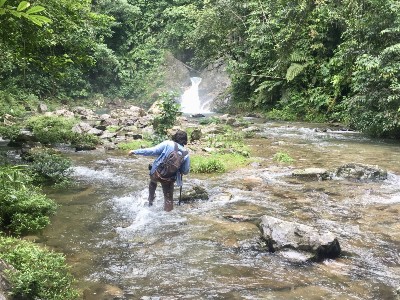 Nicolas Pérez-Consuegra wading through water in the Caqueta Canyon, one of the locations where the team collected a rock sample.

“Tectonically active faults are causing uplift of the mountains surrounding Mocoa and are also making the landscape steeper,” Pérez-Consuegra says. “Steeper and taller mountains are more prone to have landslides. Rainfall, and specifically torrential rains, can trigger the landslides, but what sets the stage are the tectonic processes.”

Hoke says that while geomorphologists would like to think that rainfall rates can take over as the major influence on mountain formation, Pérez-Consuegra’s research proves that Earth’s internal deformation is the main factor.

“While prior work within a bullseye of high rainfall in Colombia’s Eastern Cordillera initially pointed towards a strong climate control on mountain growth, Nicolás’ work expanded the same types of observations to another precipitation hotspot over 250 miles away and found the rates at which rock is transported to the surface were dependent on fault activity, and not precipitation amount,” Hoke says.

Pérez-Consuegra, who will start a postdoctoral fellowship in environmental sciences at MIT in the fall, notes that geological knowledge is essential for predicting what areas in a tropical mountain range are more prone to have landslides, earthquakes and volcanic eruptions, and the catastrophic consequences that these events might have in the surrounding populations.

“It is important to invest in doing better geological mapping in tropical mountains, to better understand the spatial distribution and geometries of tectonically active faults,” Pérez-Consuegra says.

You can read more about Pérez-Consuegra’s research in the journal Tectonics: “The Case for Tectonic Control on Erosional Exhumation on the Tropical Northern Andes Based on Thermochronology Data.”