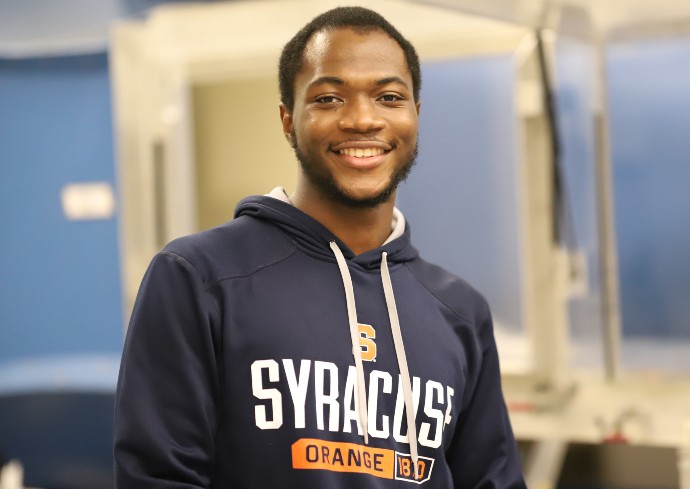 There are 54 current chapters of Sigma Gamma Tau across the country and each chapter nominates one student for the Ammon S. Andes Award each year. The national award winner is chosen from the 54 nominees based on:

“I am very honored to be recognized in such a manner as an aerospace engineering major,” says Oluwalana. “I am extremely grateful for Dr. Davidson’s support as the Sigma Gamma Tau advisor and appreciate everyone else who supported me throughout the process.”

“Daniel displays the strength of character, the academic excellence, the research skills and the compassion for others that are the hallmark of a great individual and a great scholar,” Davidson says. “It has been a pleasure for me to teach, mentor and interact with him over the past three years. I was so proud to have Daniel represent SU in this competition, and I’m so incredibly pleased that Sigma Gamma Tau recognized and honored him with this award. It is certainly well-deserved.”

Oluwalana is the president of the Syracuse chapter of the National Society of Black Engineers (NSBE), an Academic Excellence Workshop facilitator and has worked in two research labs in the College of Engineering and Computer Science as an undergraduate.

“Syracuse University exposed me to amazing research opportunities and instilled in me a balanced mindset. I have developed a deeper knowledge about my field and have become a better communicator by being a student here,” says Oluwalana.

“Daniel is an incredible young engineer, leader and person. He is being honored for the ‘visible’ work that people notice, including his NSBE leadership, grades and research. For each of those achievements, there is also the ‘invisible’ work where he supports his classmates, greets prospective students and counsels other leaders about issues that are vital to our college,” says Engineering and Computer Science Dean J. Cole Smith. “I’m so excited for Daniel and for the impact he will make in his next phase of life.”