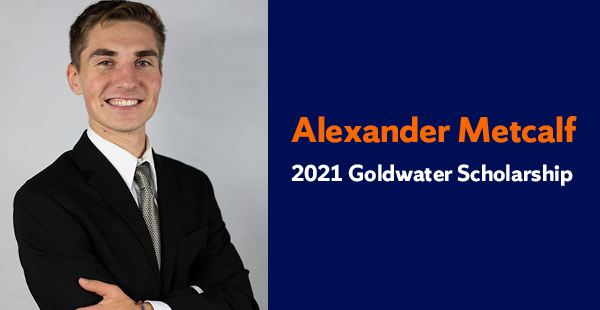 The Goldwater Foundation received 1,256 nominations this year from around the country and 410 students were selected for the scholarship.

“I am very honored to have been recognized by the Barry Goldwater Scholarship,” says Metcalf. “The award will aid in my future endeavors in a Ph.D. program and eventually pursuing research work for the Department of Defense or a private company within the aerospace sector.”

Metcalf worked with the Center for Fellowship and Scholarship Advising (CFSA) to prepare his application. A faculty committee, headed by James Spencer, professor of chemistry, selected Syracuse’s nominees for the national competition.

“Alex’s extraordinary academic record and research profile made him an outstanding Goldwater candidate,” says Jolynn Parker, director of CFSA. “His selection for the award is a vote of confidence in his potential to do important research in the future.”

Metcalf has sought out a range of research opportunities during his time at Syracuse. In summer 2019, he interned at Wright-Patterson Air Force Base in Dayton, Ohio, developing computer code capable of performing mechanism assembly for the software Engineering Sketch Pad under the advisement of John Dannenhoffer, associate professor and aerospace engineering undergraduate program director.

Metcalf also pursued a bioengineering independent study research project during the fall 2019 and spring 2020 semesters overseen by Pun To (Douglas) Yung, associate teaching professor of biomedical and chemical engineering and bioengineering undergraduate program director. Project Footstrike focused on creating a computerized shoe insole capable of measuring a user’s heel strike and toe off mechanics during activity. Metcalf was the lead computer coder for this project, which required him to write code in C++ and MATLAB coding languages with the aim of increasing accuracy of the heel strike and toe off mechanics measurements.

In summer 2020, Metcalf joined the Combustion and Energy Research laboratory of Jeongmin Ahn, associate professor of mechanical and aerospace engineering. There, he is currently working on a hybrid power train for small unmanned aerial vehicles.

Metcalf plans to pursue a Ph.D. in mechanical and aerospace engineering with a focus on combustion, propulsion and aeronautics. “I want to work in a field that blends computational modeling and simulation with real-world testing and engineering,” says Metcalf. “I am particularly interested in conducting research that will increase efficiency and reliability of the engineering systems that contribute to U.S. national security.”

CFSA seeks applicants for the Goldwater Scholarship each fall; the campus deadline is mid-November each year. Interested students should contact the CFSA at cfsa@syr.edu.

ECS Students Invited to Study Abroad at the Crossroads of Europe

The Syracuse University center in Strasbourg, France, offers an incredible study abroad experience for College of Engineering and Computer Science (ECS) students. Located in western France on the border of Germany, Strasbourg is centrally located with easy access to Switzerland,…

Hundreds of millions of light-years away in a distant galaxy, a star orbiting a supermassive black hole is being violently ripped apart under the black hole’s immense gravitational pull. As the star is shredded, its remnants are transformed into a…

With a climbing death toll of more than 5,000 people and thousands still missing, Turkey and Syria have been devastated by the magnitude 7.8 earthquake that hit the two countries this week. Joshua Russell is an assistant professor of seismology…