Keeping SARS2 Out of the Cell 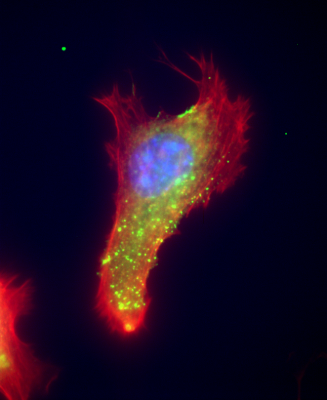 Epifluorescence image of extracellular vimentin (green), here seen with the protein actin (red) and DNA (blue), speeds up delivery of SARS2 to the cell. (Courtesy: Maxx Swoger and Alison Patteson)

As vaccines are distributed worldwide to fight the pandemic, important research at Syracuse University may uncover ways to block it and similar viruses in the future. Alison Patteson, assistant professor of physics, and Jennifer Schwarz, associate professor of physics, recently completed a study that tested the ability of certain antibodies to block SARS2 from entering cells by way of cell-surface vimentin, a protein that is also a pathway for the virus to enter the body. The study was funded by a $196,000 National Science Foundation RAPID Response Research initiative grant.

While bacterial pathogens such as Salmonella and E. coli can survive on their own without a host cell to infect, viruses must get inside cells to replicate and use that cell’s own biochemical machinery to build new virus particles and spread to other cells. But in order for this process to start, the virus must find a way to first adhere to the surface of a cell.

There are two main ways the SARS2 virus enters human cells. When someone infected with coronavirus coughs, sneezes, sings, talks, or breathes, the tiny particles they expel are projected into the air. Then, another person inhales those particles into their nose, mouth, airways and lungs. When these particles enter the lungs, they begin searching for cells to attach to. In the case of the SARS2, a spike protein in the virus searches for a cellular receptor called ACE2 to adhere to. Think of the spike protein and cellular receptor like two pieces of Velcro. Once attached, the virus can enter the cell through membrane fusion (where the virus particle merges with the host cell) or endocytosis (where the virus particle is engulfed into the host cell).

Patteson, Schwarz and a team of researchers have identified an important protein in this process called vimentin. Vimentin is a key internal structural protein present in many cell types that protects its nucleus against deformation, rupture and DNA damage. They have uncovered that this molecule also lives on the outside surface or the cell, where it adheres to the spike protein in the virus and helps speed up its delivery to the ACE2 receptor of the cell, acting as a mediator. Finding an antibody that would prevent vimentin and its attached virus spike protein from connecting to the cell surface could halt one of the common ways people contract COVID-19. 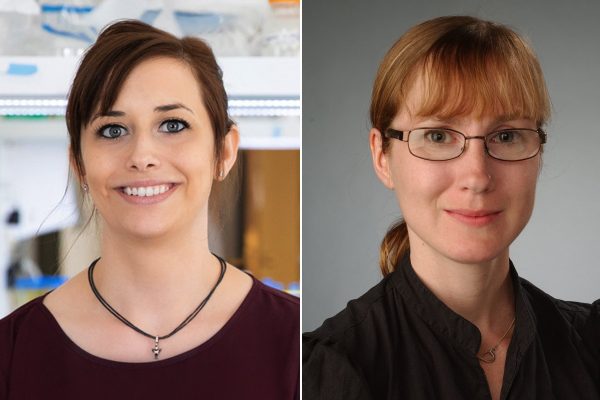 Patteson and Schwarz became interested in investigating this topic after reading reports of vimentin being implicated in SARS1, a respiratory illness that affected many people worldwide in 2003. Their cutting-edge research is one of the first to show that antibodies against vimentin can block cellular uptake of the SARS2 coronavirus.

In a research collaboration with Nascent Biotech, a company currently developing human anti-vimentin antibodies for clinical cancer studies, they reported positive results demonstrating that the same antibodies against vimentin can block up to 80% of host cell invasion. Their results suggest a new target and therapeutic strategy to reduce SARS-CoV-2 attachment and entry into the cell, which could reduce the spread of SARS2.

The Patteson Group is now in the planning stages to test the antibody in living models. According to Dr. Navpaul Singh, Nascent Biotech chief medical officer over viral research, if the anti-vimentin antibody prevents uptake of the virus in animal models, the next logical step would be to test it in humans. “If we have success in humans, we then have a successful therapeutic strategy against COVID-19,” he notes.

Patteson says potential therapeutics could be administered in two ways. One is a nasal spray, which would be used after possible exposure to the virus. The spray would reduce or prevent the virus-carrying vimentin from attaching to the surface of a cell. Another is intravenously, where the antibody would be combined with an antiviral medication like Remdesivir, which prevents the replication of the virus for patients already suffering from COVID-19. Anti-vimentin antibodies could prevent further uptake of the virus to cells in the body.

While these treatments are still in the early stages of development, the team’s breakthrough shines a light on a new way to halt SARS2 and future viruses from entering the cell. Preventing viral invasion of cells using anti-vimentin antibodies could be another tool, along with vaccines, to eventually bring the virus—and future pandemics—under control.