As people celebrate Black History Month, many in and connected to the African American community may be interested in tracing more of their family history and learning about their connections to the African continent. How do you piece together your family tree, and are some ancestry tests better than others? 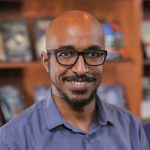 Yasir Ahmed-Braimah is an assistant professor of biology at Syracuse University’s College of Arts and Sciences. His research specialty includes evolutionary genetics. Below, he answers seven questions related to ancestry and genetic tracing services, especially pertaining to those with Black and Brown ancestry and family lineage.

Q: Ancestry kits by companies such as Ancestry.com, MyHeritage DNA and 23AndMe have grown in popularity over the last several years. Can you briefly explain the science behind their DNA collection process and their ability to identify or trace your genes?

A: Companies like Ancestry and 23andMe will typically send you a kit that contains a small “spit vial”, in which the customer deposits some saliva and sends back to the company. The company then isolates genomic DNA from the cells that were recovered in the saliva. You can imagine this is not a lot of cells, but they are able to extract enough DNA for the subsequent steps. Then, once the customer’s DNA is isolated and purified, they don’t actually sequence their entire genome—at least not in most cases. What they do is identify specific nucleotide bases—i.e. positions in the genome—that are known to vary in human populations; these are called “single nucleotide polymorphisms”, or “SNPs” (pronounced snips). This process is known as “genotyping”: the process in which they identify the specific nucleotide bases that a person has, and these can be one of four letters: A, G, C, and T. There are about 700,000 of these SNP sites in our DNA that have been previously identified and are known to vary among human populations. This is very cost-effective, because most of the 3 billion nucleotides that make up the human genome are identical between all humans, so only looking at those that vary will provide identifying information about our ancestry and genealogical origins. So, once they have profiled all of an individuals’ SNPs, they compare the customer’s collection of SNPs to their database of humans that have been genotyped and/or sequenced. Typically, humans from closely related groups (families, ethnicities, or individuals from historical geographic localities) will share many or most of their SNPs because they inherit the same genetic information from their shared ancestors.

Q: I’ve read that the more people that send in their DNA to these services, the better their data sourcing. Can you explain why that is?

A: The reason for this is because the more genetic information they have from individuals from around the world, the more “coverage” they have of human genetic diversity. Because their ancestry assignments rely exclusively on how your set of 700,00 SNPs compares to individuals in their database, the size of that database is a major factor in determining how accurate their placement of your likely ancestral lineage will be. Currently, they have fairly deep sampling across the world, but that wasn’t always the case. For example, they had far fewer people in certain regions of Africa sequenced, which meant that if you originate from these regions you were less likely to receive an accurate ethnic placement in that continent. So, the more samples that exist, the higher the confidence in your ethnic makeup and the more precise your placement within genetically distinct groups.

Q: If you complete a profile with one of these commercial companies, how accurate should you expect your results to be?

A: It depends on several factors: (1) the number of sequences from individuals from your ethnic group and/or ancestral geographic range, and (2) the degree of admixture of your own lineage—although this now is dealt with very well even among highly admixed individuals. Humans are fairly admixed in many populations now, and often the interest within those of us who are admixed is to discover the extent of our admixture and whether we can in some way connect with our genealogy in ways that we weren’t able to before. These ancestry inference kits provide that opportunity.

Q: Related to the African diaspora, is there any evidence or research showing some kits or types of tests are better than others? From a scientific approach, does any of the testing process change based on ethnicity or race?

A: It all goes back to the extent of sampling. Historically, African populations were under-sampled and under-sequenced, so there was far reduced resolution to assign ancestry to certain groups in Africa. I think this is still true for many groups in Africa. Importantly, the African continent and African people are also the most genetically diverse intracontinental group, so an especially deeper sampling of humans for genotyping/sequencing would be required there to gain similar levels of ancestry resolution that you might gain in most parts of the world. From my understanding, these kits are all relatively similar in how ethnic groups are dealt with, and it all depends on how many ethnicities and genealogical groups—and ultimately customers—they currently have in their databases that they can “confidently” place into ethnic categories. The testing remains the same, but levels of genetic variation will pose distinct challenges to analyze, depending on your level of historical admixture.

Q: Same question as it relates to those from the continent of Asia – are these kits still pretty reliable in genetic detection?

A: Yes, they mostly work equally well for each group, but this also depends on the sampling and ethnic subdivisions they may include in their databases. I recall that for east Asian populations the categories were fairly crude, but this also reflects the historical geographic stability of certain populations.

Q: From a more personal standpoint, why do you think people are so drawn to the idea of knowing more of their biological and ancestral history?

A: I think it stimulates the core of our interest to know that a DNA test can reveal aspects of who we are that we might not know about and that may have been lost to history. There are many who are fortunate to have a detailed genealogical record of their family lineage that dates back hundreds of years, but many others don’t have this luxury for various reasons, including historical suppression and marginalization. These DNA tests provide everyone the opportunity to connect with that past, and to learn about one’s history in what I think is a very powerful way.

Q: Any other thoughts you would share or point out on this topic?

A: I think these DNA tests are certainly a good thing for those who are interested, and while I don’t specifically endorse any one of these companies, what they provide is a service that is in many ways democratizing the ability to reclaim one’s history and identity. The more of us perform these tests, the more they become useful for subsequent users. My hope is that we can keep these companies honest and not allow them the chance to abuse people’s privacy and mishandle the large amounts of valuable personal data they have on millions of people. So far things are mostly OK, but we have to ensure it stays that way.